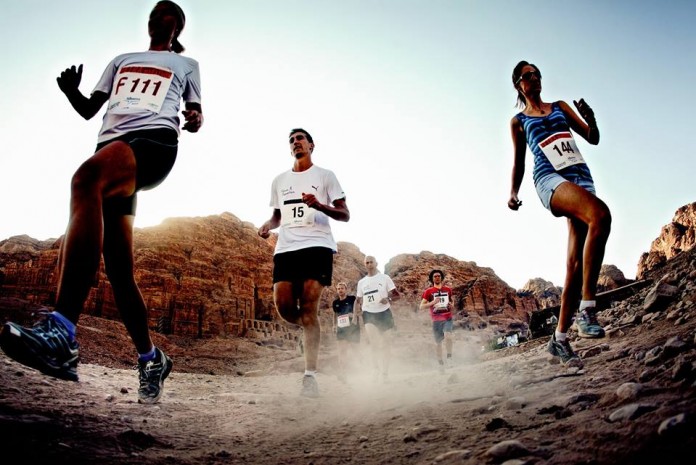 The Marathon is an annual race held in May along and on the Huangyaguan or Huangya Pass, Tianjin section of the Great Wall of China East of Beijing. Since its first start in 1999, the race has grown to several hundred participants. The course is much tougher than traditional marathons with participants challenged by 5,164 stone steps and many steep ascents and descents. It is also listed on the Forbes list of the Top 10 Marathons Worth Travelling For and known worldwide as one of the toughest races.

Despite the arduous course on the iconic Great Wall of China, runners will be rewarded by the breathtaking surroundings and views. As the route leads participants through the lower valley and into the villages, onlookers will be cheering and the festive atmosphere is a real energy boost!

The red earth of Central Australia is waiting. With stunning views of Uluru and Kata Tjuta around almost every corner, the Australian Outback Marathon provides the ultimate outback adventure experience. The entire marathon course is relatively flat from a topographical point of view but there are a few little inclines here and there. A couple of short sand dunes also make an appearance and whilst they are not long or high they will certainly feel like a challenge when running up them. The views at the top will certainly make the effort worthwhile.

Pyongyang Marathon, also known as Mangyongdae Prize International Marathon, takes place in North Korea and is open to foreign amateur runners. This IAAF Bronze Label Road Race has 3 categories of full, half marathon and 10km and has a race history of 2 years.

All runners are invited to participate in the race’s opening ceremony, which involves a lap of the Kim Il Sung stadium in front of a capacity crowd. After the race has finished, the top three in each amateur category (men’s full; men’s half; men’s 10km; women’s full; women’s half; women’s 10km) will be invited to take their place on the stadium’s podium for the award ceremony.

Run a marathon in one of the world’s most mysterious, beautiful and inaccessible countries.

At an elevation of 6700 feet, the marathon route is mostly rural, on hard pack dirt and pavement. As you journey through the stunning rural countryside and villages, before finishing at the historic Punakha Dzong, you will get to discover the geographical and cultural wonders of Bhutan, The country is naturally designed to be a tantalizing destination for adventure and spiritual seekers. 100% of the profits made through this event will support Bhutan’s Youth and Olympic Sports programs.

The Great Ocean Road is an icon in Australia and is renowned throughout the world for its beauty and panoramic views of the southern ocean. It has a colourful history surrounding its construction and ultimate destinations along the coastline.

The Marathon is held in a beautiful and unique area of Victoria, Australia on the Southern Ocean. The event is staged along the iconic Great Ocean Road with stunning views of the Southern Ocean. It celebrates its 10th anniversary in 2014. In 2013, over 5700 entrants competed from over 12 countries. Organisers are expecting to increase participation to over 6,000 for the 2014 competition.

The Great Hakka is an annual cross-country marathon race taking place in scenic Nanjing County close to the city of Xiamen, China. It is organized by some of the original creators of the Great Wall Marathon, and it features a similar event format with a marathon race, half-marathon and a fun-run. The Great Hakka builds on organizing experience and feedback received from thousands of runners over the course of 15 years. The area features unspoilt landscapes and century-old traditions, as well as the iconic Hakka Houses, which are recognised as World Heritage by UNESCO.

The Mt. Fuji Marathon is held at Fujikawaguchiko-machi, Yamanashi Prefecture. The snow-capped peak of Mt. Fuji comes in and out of view multiple times along the course. In addition to the mountain views, runners can also enjoy the beautiful autumn leaves around Kawaguchi-ko Lake and Sai-ko Lake. With its reputation as the world’s most beautiful course, the marathon has experienced a burst of overseas participants.

The marathon also features a 10km charity fun run, organized in response to requests from people who want to run while enjoying views of Mt. Fuji, but feel unable to participate in the full marathon. A portion of the participation fees is donated to Mt. Fuji cleanup activities.

A one of a kind destination marathon race that celebrates the majestic beauty of the lands in Yunnan province of China. Taking place in the enchanting Puzhehei scenic area featuring hundreds of green karst land formations surrounded with crystal clear waters providing breathtaking views. These undeveloped lands are known have some of the purest air quality in China. A combination that provides runners a truly unique experience that they will remember for a lifetime