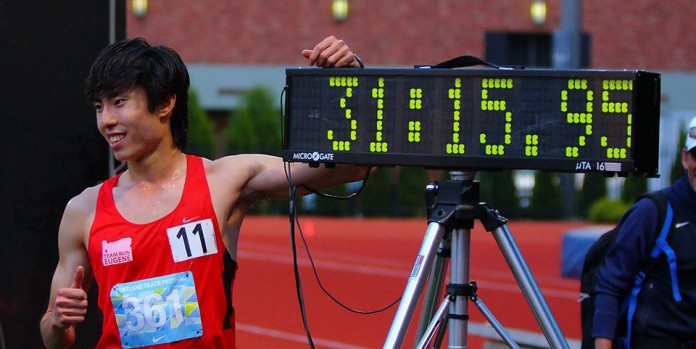 Training for the race

To train for the race, Soh, a student currently based in the USA, gradually increased his total mileage and clocked up his runs on a mixture of trail, road and track. This is because running on the same surface puts too much pressure on the joints, thus increasing the risk of injuries, according to the runner.

Confident of breaking the record

Soh, 22, had been quite confident that he could break the record. This was because he had done plenty of training. Despite being injured in the lead-up to race day, he still felt that a good run would bring him under the mark and get him the record.

To put it in a nutshell, Soh’s race strategy was to run 75 seconds per lap consistently throughout the whole race.

But it was made more difficult, by the fact that he had to pace himself.

Most challenging part of the race

The most challenging part of the race for Soh, was the fact that this record had eluded runners for a massive 41 years. As a result, some doubted his ability to succeed in what many others had failed to do – for four decades.

But his coach had faith in him, and in the end, this had paid off tremendously.

Now that he already has the 10,000m record firmly in the bag, Soh is secretly eyeing the marathon record (2 hours 24 minutes and 22 seconds), set by Murugiah Rameshon in the 1995 South East Asian Games.

To read an interview with Soh about his record-breaking attempt, click here.