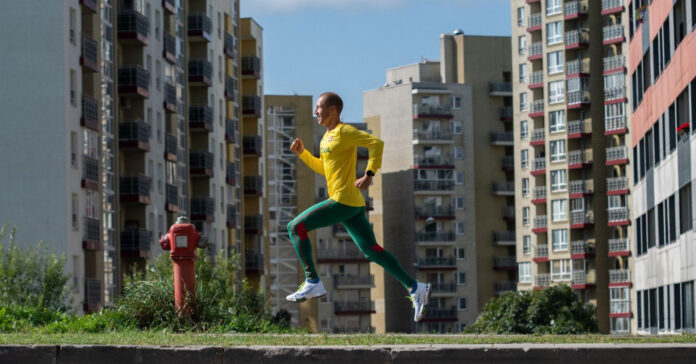 Ultramarathon runner Aleksandr Sorokin has broken world running records 7 times so far. Currently, he is preparing for the 2022 IAU 24-hour European Championship, which could turn into a new personal best. But his story wasn’t always about victories – it also includes several occasions when he planned to quit running altogether.

On top of that, he broke his own records multiple times.

How did he achieve all that, and what challenges did he meet along the way?

The shoulder injury that ruined a kayaking career

Aleksandr Sorokin was an active kid. When he was 13 years old, his dad suggested trying kayaking, one of the sports both of them enjoyed. He showed promise and even won the junior league championship, representing Lithuania in the world championships.

Sadly, during one of the more intense workout sessions, Sorokin strained himself too much and got hurt. “My shoulder injury stopped me from going further in my kayaking career, and that, in turn, led me to quite a dark path,” explains Sorokin.

In 2005, he quit sports altogether, got a job, and entered a new era full of parties and fast food. He thinks he probably tried to catch up to all the years on a strict regimen of working out and eating healthy.

“There is this restaurant in Lithuania near Kaunas that is famous for its zeppelin dumplings, the traditional local dish made of potatoes, meat, and heavy cream. In this place, one dumpling weighs around one pound. My friend and I would order three dumplings each,” Sorokin remembers.

Unsurprisingly, all the bad habits tend to add up. Sorokin says that he spent years eating unhealthy foods, and that started to show – he would have difficulty looking at himself in the mirror. But all of that changed on April 1, 2013, when he decided to transform his life completely.

A poster that changed everything

He started running because it was one of the easiest ways to exercise. But simple daily runs didn’t cut it. After two months of running and completing a half-marathon, Sorokin felt he needed a real challenge. By a lucky incident in a local park, he found a poster inviting runners to join the 100-kilometre race.

“Running without a big goal in mind is boring. If you want to keep going, you need a challenge,” he explains. He signed up for his first ultramarathon that was going to happen in 50 days.

Soon after, the day of his first big competition came. He finished it in 8 hours 34 minutes. Even though everything hurt, Sorokin felt cathartic.

In the same competition, Gediminas Grinius, another Lithuanian ultramarathon runner, broke the record and completed the 100 kilometres in 7 hours and 7 minutes. “That got me thinking – should I try to do that, too? Next time, I will try to run faster,” – says Sorokin.

In the next race, he completed the competition in 7 hours and 20 minutes, which got him noticed by Aidas Ardzijauskas, the leader of local ultramarathon runners. Ardzijauskas offered to try out the 24-hour running competition.

“My first reaction was that this is complete nonsense,” laughs Sorokin. “With a 100-kilometre run, you can at least understand the end goal. It was hard to wrap my head around running 24 hours non-stop. But I agreed.”

How to run for 24 hours straight

The 24-hour race rules are pretty simple. You run laps and win if you manage to run the farthest distance among other racers. You can stop, rest, or run only 5 miles during those 24 hours – it’s entirely up to you. But of course, it’s a high-level competition, and most of the participants come in ready to elevate their game and bring their teams with them.

“I was lucky enough to have my brother helping me out every step of the way. Other participants would bring huge teams of masseuses, chefs, or medics. All I needed was my brother, who is so dedicated that he uses up his vacation days to come and support me,” says Sorokin.

The first hours are quite easy. Then, the first signs of tiredness set in, and Sorokin says that the runner starts to understand they must enjoy the moment since it will get harder soon. The first big crisis emerges when the sun sets down. “Your body wants to sleep, but you cannot. You have to control the exhaustion, or it will defeat you,” he summarizes.

According to him, the exhaustion comes in waves. Sometimes you feel quite well, and then the crash awaits. You cannot even think straight, and that’s why the support team is essential here – they would tell you to eat and drink to keep up your energy levels.

“Sunrise marks the hardest part of the race. Only when the sun rises will you know if you will manage to complete the competition,” says Aleksandr Sorokin.

Running for a hand in marriage – and away from the sport

“To win the next competition that happened in Greece, you would need to break the current record and complete the 252-kilometre run. I thought to myself – if I manage to do this, I will propose to my girlfriend,” says Aleksandr. And without a doubt, he completed the competition with 260 kilometres under his belt – and a wedding to plan.

The next big challenge was supposed to be the IAU 24H Ultramarathon European Championship of 2016. But a couple of hours in, Sorokin understood that he came in too fast and would not be able to keep the pace. “I became the spectator of the race – watching how other runners passed me, waiting for all of it to end.”

This gave him a good lesson – don’t start off too strong, or you will struggle to finish.

Another competition was even worse since his running tracker malfunctioned and didn’t show the real results. Two exhausting losses in a row discouraged him and he was even willing to quit the sport altogether. “So much work went into these competitions, but so little results came out. I thought I would quit and start working in construction,” remembers Sorokin.

The series of breakthroughs

Luckily, he had already signed up for another race, Spartathlon in Greece, and decided to give the sport one last shot. He returned to his old tactics – and mostly focused on the first part of the race. And he finally came first!

It seems that this unlocked a new stage of running for him. What followed was a series of records.

In the 2018 IAU 24H European Championship, Sorokin almost made the same mistake – he started strong and got exhausted, seeing how other runners passed through. Another runner joined him and restored the motivation for both. Sorokin won the bronze medal in that race, but more importantly – he regained his confidence.

“During the race, I look up to the tableau, and I see that my laps are not properly counted. It has happened again! My dad goes to the jury and asks them to update the results, even though he doesn’t speak English that well. He managed to get my results back in,” says Sorokin.

That wasn’t the only issue in this race. He managed to have a nice distance between him and his competitors, but the energy crash came later than expected, and the distance started to vanish.

Despite having to overcome all of these obstacles, 40 minutes until the finish, he had already broken the national record and decided to finish his final lap walking. And he still became a winner.

Sorokin won gold in one of the world’s most difficult endurance races six years after he began running. Breaking world records has become a tradition for him since then, and so far he has broken seven world records.

In 2022, Sorokin decided he wanted to share his experience with other runners. He became the ambassador at Joggo, the running app for people that helps build a solid foundation for anyone who’s just starting out. “I am excited to share all of these lessons with beginner runners. Hopefully, they won’t need to make the same mistakes as I did,” he says.

Joggo is a running assistant designed to help novice runners avoid the most common mistakes of starting a jogging routine. Joggo’s features include a personalized running plan, educational content, an engaging reward system, and runner-inspired meal plans. The app is available for download for both iOS and Android. The app is developed by Kilo Health, the leading company in the digital health and wellness industry.

Our database has
7222
listed events.
Get tickets

15 Best Exercises To Strengthen Your Core and Tone Your Abs...

15 Best Exercises To Strengthen Your Core and Tone Your Abs...