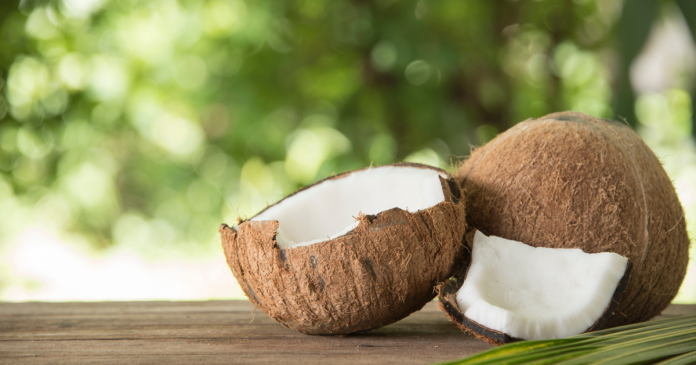 Or how does it compare with coconut milk, coconut oil and coconut flesh? Here’s what you need to know about coconuts from the Dietetic & Food Services at Changi General Hospital (CGH).

The humble coconut, once only found at hawker centres and used for nasi lemak and bubur cha cha, has seen its popularity skyrocket lately. Coconut oil products have slowly been making their way onto the mass market since hip and innovative drinks infused with coconut are becoming wildly popular.

But are the many health benefits surrounding a coconut actually true? Let our dietitians from Dietetic & Food Services at Changi General Hospital (CGH), a member of the SingHealth group, lay down the facts for you!

You might not know that a regular-sized cup of your favourite coconut shake could contain up to 350 calories and 20 grams of fat.

“Coconut shakes and dessert drinks contain not only natural sugars but also added sugars/syrups as well as fats, in particular saturated fats from coconut flesh, coconut ice-cream/coconut cream or milk that is present in common recipes,” said Dietitian Miko Yeo.

Saturated fats can increase LDL cholesterol (the “bad” cholesterol) levels, which may increase the risk of cardiovascular diseases. High-calorie beverages can also contribute to excessive calorie intake and obesity, just as sugar-filled drinks such as bubble tea and sweetened drinks can,” Yeo added.

Here’s how you can enjoy coconut shakes in a healthier way, you can:

Coconut water is touted as a great tool to rehydrate after exercise or a bout of diarrhoea as electrolytes such as potassium, sodium and manganese are present. However, plain water works just as well for hydration under most circumstances. Do note that coconut water contains at least 50kcal and up to 10g of sugar per 250ml (1 cup).

Unlike coconut water, coconut milk does not occur naturally but rather results from the reconstitution of coconut flesh and water.

Coconut milk is a source of several vitamins and minerals essential to our body. One cup of coconut milk (250ml) contains 600 calories, while one cup of coconut cream (canned) contains 1500 calories, most of which are fat calories. Coconut milk is rich in saturated fat, which has been shown to raise harmful Low-Density Lipoprotein (LDL) cholesterol levels. High LDL cholesterol levels increase one’s risk of heart diseases and stroke.

Coconut oil should be taken in limited quantities due to high saturated fat content. Coconut oil has also seen a boom in topical use as a product for the hair and skin due to its postulated moisturising and anti-inflammatory properties. While hairstylists and beauty specialists swear by coconut oil products, these benefits have yet to be substantiated by medical studies.

Many health claims for coconut oil can be attributed to the presence of medium-chain triglycerides (MCTs). MCTs are posited to aid in weight loss, because they are more efficiently turned into energy. However, studies have yet to be conclusive, and any excess MCT will still be stored as fat in the body. It should also be qualified that commercial coconut oil contains mostly lauric acid, which is not an MCT.

The fleshy interior of the coconut provides 175kcal per coconut (50g of flesh). It contains 4g fibre, which may be useful for digestion and satiety. Similar to coconut oil and milk, the flesh also contains high levels of saturated fat.

Coconut contains many vitamins and minerals, and if you enjoy it, keep eating it. The keyword is: Moderation! Don’t go (coco)nuts!

Our database has
7203
listed events.
Get tickets