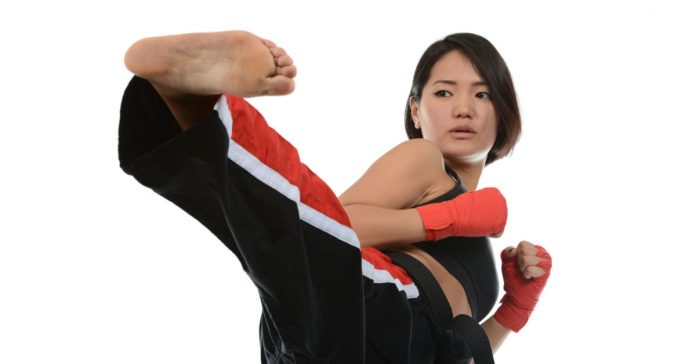 Kickboxing, although it came from Asia, is not as old as some of the other forms of martial arts that it is based around.

KickBoxing was first introduced in the late 1950s by a man named Osamu Noguchi. He adapted from other forms of martial arts, one of them being Thailand’s martial art, these days known as Muay Thai. Along with other forms of fighting techniques such as boxing Muay Thai is a type of fighting technique that dates back to the 1700s. However, it had different and more generic names.

No one really knows where martial art, karate, came from. We do know that it was used in the Okaiwaian islands.

Karate in the Japanese language means the empty hand. It was used as a form of self-defence.

Difference between Kickboxing and Karate

Although both kickboxing and karate are both forms of sports that originated in Asia, they both are unique.

Kickboxing is not considered a martial art, just a sport. Karate, on the other hand, is considered as both.

Karate has a connection to a spiritual side of art forms, such as mediation, and has been around for hundreds of years. Kickboxing has only been around for the last 60 years or so. Kickboxes use gloves while karate does not. Kickboxing is considered more of a sport which takes other martial art forms and incorporates it into kickboxing.

How Many Different Styles of Kickboxing are there?

Although kickboxing sounds like one style of fighting technique, there are about 13 different styles of kickboxing. Most of which are related to different countries around SouthEast Asia. Such as India, Cambodia, Burma, China and Thailand. Which soon became popular in the western world during the 1970s

The film industry helped boost the popularity of both kickboxing and karate. Karate was probably made more popular from not only Bruce Lee taking films to Hollywood, but also one of the most popular 80;s films, the karate kid.

Soon after that, the not quite so famous Kickboxer film was released. Both of these films had a big impact within the martial arts industry, with many teenagers signing up to karate and kickboxing classes. Both films have since been remade, and once again both sports saw a rise in interest.

The main differences between styles is, what part of the body you can use to strike an opponent. Different styles mean different types of clothing are allowed to be worn, for example, in Savate (French kickboxing) it is possible to wear shoes into the ring, which inevitably will cause more serious strikes.

In the western world, cardio kickboxing is becoming more popular and is aimed for fitness and around kickboxing. It is basically a way of staying fit and practising kickboxing without having to fight anyone.

There are three different main types of fighting; the most brutal of them would be knock out fighting.

Knock out fighting has up to 8 rounds or more and each round last 2-3 minutes. If both fighters are still standing after the rounds are up, then the winner is determined on a points-scoring basis. Knock out fighting would be for a more experienced fighter.

An amateur fighter would probably have points tested fight. This means that whenever a connecting punch/strike is gained, the fight is stopped and the attacker wins a point. The first fighter to get a certain amount of points in a certain time frame will win the fight.

This type of fight is very energetic and fast pacing.

In a continuous fight, if an opponent is struck, then the fight is not stopped. The judges will count the number of points which each fighter has. There are generally 3 rounds in this fight. The points are added up at the end of each round. The winner is announced at the end. Each round lasts for 2-3 minutes, the same as in a points-based fight.

As kickboxing is a full-contact sport, it requires certain safety features to protect the athlete and their opponents. There is no piece of equipment that is more important than the other. Each piece of safety equipment will protect different parts of the body. Although gloves, mouth guard and a helmet are all the most obvious pieces of safety equipment.

Kickboxes need to be able to move as quickly and as easily as they can. The lighter the shorts, the better.

Hand wraps that are in place to protect the hands are an important piece of safety equipment.

For younger fighters, full contact would not always be an option but having all the appropriate safety gear is a must.

As kickboxing can be a dangerous sport, safety equipment should be worn at all times, if used incorrectly could do more damage than good.

At What Age Do Kickboxers Start To Train?

As long as a person is in good health, there are no age restrictions to start learning kickboxing. There are people from the age of 5 and as old as 80 who train.

Many children start to train at a young age then drop out and return to train as an adult. This means that they will more than likely have to start all over again, due to the fact they have forgotten their training.

People who are in their 80s will have generally already been training for some years. Not many elderly people would take up such a physically demanding sport.

Research has shown that starting from a younger age can be more beneficial not just from the physical aspect that goes with kickboxing, but from the mental point of view as well. Some of the best kickboxers of all time started training at a tender age. In some cases, it has come down to the instructor themself on whether or not someone can train in such a brutal and physical sport. The safety and well-being will always be the top priority for any responsible trainer, instructor, or teacher.