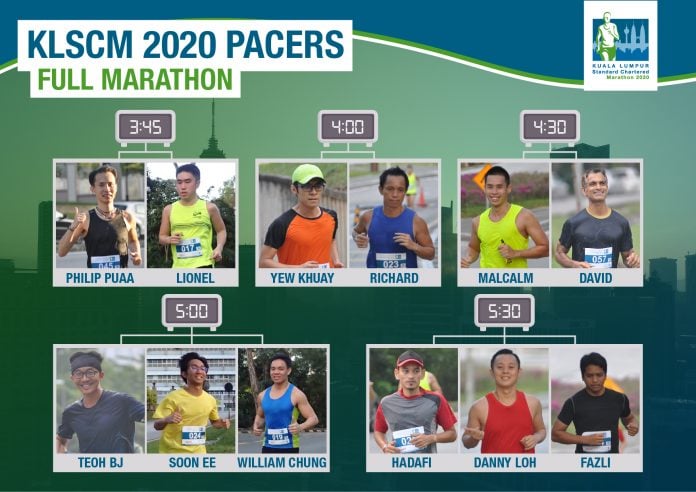 Have you ever used the services of a Pacer in a distance running event? Was it because you wanted to finish at a certain time or because you needed the encouragement, motivation and advice that an experienced Pacer could provide? Those are usually the main reasons why runners decide to follow a Pacer during an event but collectively, the Pacing team of a particular event play a significant role in getting as many runners as possible to achieve their finishing time goals. Pacers also perform an unofficial role as ambassadors and advocates of the event.

The Kuala Lumpur Standard Chartered Marathon (KLSCM) began its Pacer programme in 2010 with the intention of raising the quality of the event, and it has grown to become a crucial ingredient of KLSCM ever since. Becoming a Pacer for the premier distance running event in Malaysia is a serious responsibility so this year, Dirigo Events, the owner and organizer of KLSCM, decided to invite and conduct open trials for all those harbouring aspirations to be a Pacer.

Out of an initial 247 applications, 116 runners were shortlisted for the Trials which took place over two consecutive Sundays. Both sessions were held over a 1km loop at the LHDN offices in Jalan Duta. The candidates were required to run consistently timed loops without the aid of watches or any electronic devices. The intention was to get the candidates to run by “feel” as consistently as they could, with the Half Marathon hopefuls doing 10 loops while those trying for the Full Marathon had to complete 18 loops.

“For the 12th edition of KLSCM, we felt we needed to freshen up our Pacer Team with some new blood and so we decided to conduct the Open Trials,” said Rainer Biemans, Project Director of KLSCM and Director of Dirigo Events. “The response was great and we had some really good performances over the two Sundays, which gives us a bit of a headache to select the best participants. But that was a nice problem to have,” added Biemans.

Biemans and the Dirigo Team have now analysed all the results and have come to the difficult decision of selecting 30 Pacers for KLSCM 2020. Congratulations to all those who were selected to be a KLSCM 2020 Pacer! Keep training and keep the KLSCM Pacer flag flying high! The successful candidates are listed below:

Please bear in mind that the selected Pacers will be making appearances at the KLSCM 2020 Running Clinics, which will commence later this month, right up till May 2020. If you have a time goal for this year’s KLSCM, do find out who the Pacers are for that timing and attend the Running Clinic that they will be at to get to know them and seek their advice. Follow the KLSCM FB page to find out who will be at which Clinic!