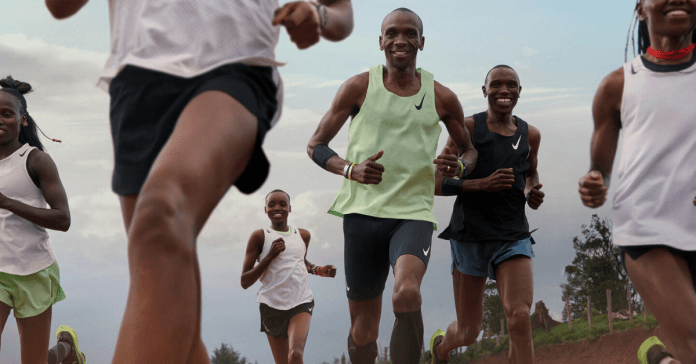 SINGAPORE – 6 February 2020 – Following its success in distance running, Nike will continue to expand the record-breaking NEXT% platform with new footwear designed to provide runners with a measurable performance benefit for a new era of competition.

Call it the ultimate test run: When Eliud Kipchoge broke the two-hour marathon barrier in Vienna this past October, he was wearing a prototype of the Nike Air Zoom Alphafly NEXT%.

“For runners, records like the four-minute mile and two-hour marathon are barometers of progress. These are barriers that have tested human potential. When someone like Eliud breaks them, our collective belief about what’s possible changes,” says Tony Bignell, VP, Footwear Innovation. “Barriers are inspiring to innovators. Like athletes, when a barrier is in front of us, we are challenged to think differently and push game-changing progress in footwear design.”

The NEXT% platform is the ultimate expression of Nike’s ambition to engineer footwear with measurable performance benefit. NEXT% is all about creating more efficient intersections between the body and technology to enable athletes to shatter personal boundaries — and sometimes, as our athletes have shown, break records. It is the ultimate meeting of sports science and purposeful design.

“The groundbreaking research that led to the original Vaporfly unlocked an entirely new way of thinking about marathon shoes,” says Carrie Dimoff, an elite marathoner and member of Nike’s Advanced Innovation Team. “Once we understood the plate and foam as a system, we started thinking about ways to make the system even more effective. That’s when we struck upon the idea of adding Nike Air to store and return even more of a runner’s energy and provide even more cushioning.”

Breaking down the Nike NEXT% system

Nike NEXT% is a footwear innovation system engineered to give athletes a measurable benefit. Informed by sport science and verified by the Nike Sport Research Lab, the Nike Air Zoom Alphafly NEXT% features three critical components, working together to help runners on race day:

Designed for higher mileage and more frequent use, the Nike Air Zoom Tempo NEXT% was created as a training complement to the Alphafly NEXT%.

For the Tempo NEXT%, the NEXT% system is specifically tuned to training. The plate shifts from carbon to a composite — softer for added comfort over higher mileage — but still serves to provide stability and transition throughout a runner’s full stride. ZoomX, prized for its energy return and responsiveness, sits above the plate at mid and forefoot. For maximum impact protection and durability, Nike React Foam is used at the heel. The same Nike Zoom Air pods featured in the new Nike Air Zoom Alphafly NEXT% are also placed in the Tempo’s forefoot to offer responsive cushioning and a sensation of propulsion.