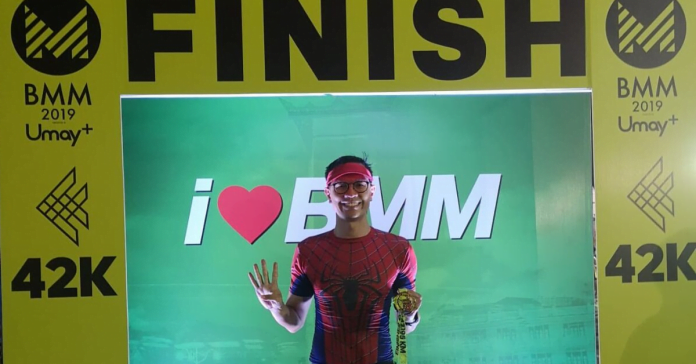 Few days before I stumbled across this Bangkok Midnight Marathon ad on Facebook, my wife told me that she doesn’t mind going for a weekend trip to Bangkok for shopping and massage. When I saw it, I thought it was perfect timing! It would add nicely to our long list of runcation (or tri-cation, if it’s a thing) this year.

The race expo was located just within Makkasan BTS – Airport Rail Link and it was very convenient to go there by train. There were not that many people when we came to collect the race pack. Everything was prompt and we got our bags in no time. Interestingly, when we received our bags, we were asked to choose A, B, or C sticker which indicates our running pace (fast, medium, slow). There’s no clear indication of what is considered fast/medium/slow pace (in terms of mins/km) so it’s based on each individual perception. I chose A and wondered how this method would turn out on the race day.

There were sponsor booths, shoes and apparels booths, stage for games and lucky draw announcement, and food vendors at the expo. The best part of the expo is the shoe spa where you can bring your running shoes for cleaning. The results seemed to be really good and the service was fast. It was too bad I didn’t bring my running shoes then.

The full marathon started at 1 am. Considering the roadblock, I decided to take Grab Bike at 12midnight to start point and it seemed to be a good decision. It only took me 5 mins to get there! It was cheap, fast and no communication required to the driver as the destination was already on the map. There were already a lot of people in each pen (A, B, C) doing their warm-up exercise. The Thais do take their warm-up seriously. There were few pacer groups with time splits already body-stickered to their arms (good idea). The race started on time and surprisingly, the A/B/C ‘self-decide’ pace turned out pretty well. Runners in my pen had a relatively similar pace and no human traffic jam.

Overall, the route was good – big roads, plenty fairy lights at the streets, passing by quite a few of landmarks along the way which I never knew they exist, plenty of hydration points and the distance was quite accurate. It was a flat route with few slopes heading up the highway. The highway was a long stretch out and back, so there was nothing else to see here. Z monster was the main concern here, and luckily for me, I was running with a Thai runner where there were no conversations but just rhythmic cadence for both of us along the route. Once we made the U-turn, he picked up speed and I continued to keep to my pace alone.

It was then that I was hit by ITB flare and decided to slow down knowing that I was well before my target sub 4-hour pace. Once I head down the highway back to the streets I knew that it was the home stretch. The only minor setback was there were few junctions at the latter half of the route which was not completely closed to motorists and runners were occasionally stopped to give way to the cars and bikes. Weather was fine, not hot nor humid though I can’t say it was cooling considering it was 1 – 5 am. There were zero spectators throughout the route so not much for ambience but again, it was a midnight marathon. There were tons of photographers along the route and I wonder how many of them were official photographers. Camera flashes were non-stop during the first and last 10km so I tried to keep my best smile always while kept pushing for the run.

After crossing the finish line, I was directed to a booth where the volunteer scanned my bib and gave me a print out of my timing and rank. I finished 8th out of 132 foreigner male category and 75th out of 2053 male finisher for male marathon category! My finish time is far from my personal best but the rank is good enough that I am entitled to get cute monkey plushie given to the first 100th finisher. I realized that there are different animal plushie given for different category as my wife got an elephant plushie for finishing 100th in female half marathon category. Interesting concept I must say to give a gift (though small) to motivate participants to do better.

The finisher area looks like a huge expo with many food vendors, photo backgrounds, sponsor booths, medical and massage tents. Finisher area for the full marathon and other distance categories are separated with almost equal size. I have never seen so much food provided after a race. Pad thai, noodle soup, dumplings, chocolate milk, Thai milk tea, you name it. They come from different vendors with a separate tent and queue for each vendor.

Technically, you can only choose one as the volunteer ticked the bib to indicate food has been collected but some of them are free for all. I went for a few rounds of food (who eats so much after running a marathon? I do!) and walked around the finisher area while waiting for the plushie collection time.

It’s pleasant to be able to enjoy Bangkok night view with no traffic jam, something that you’ll never get to see in the city centre of Bangkok unless you run at wee hours. Overall, it was a well-organized race, fuss-free trip, relatively low budget and no leave required. Also, if you’re into ranking, you might have a shot to the podium here. Will I be back? Sure, why not!