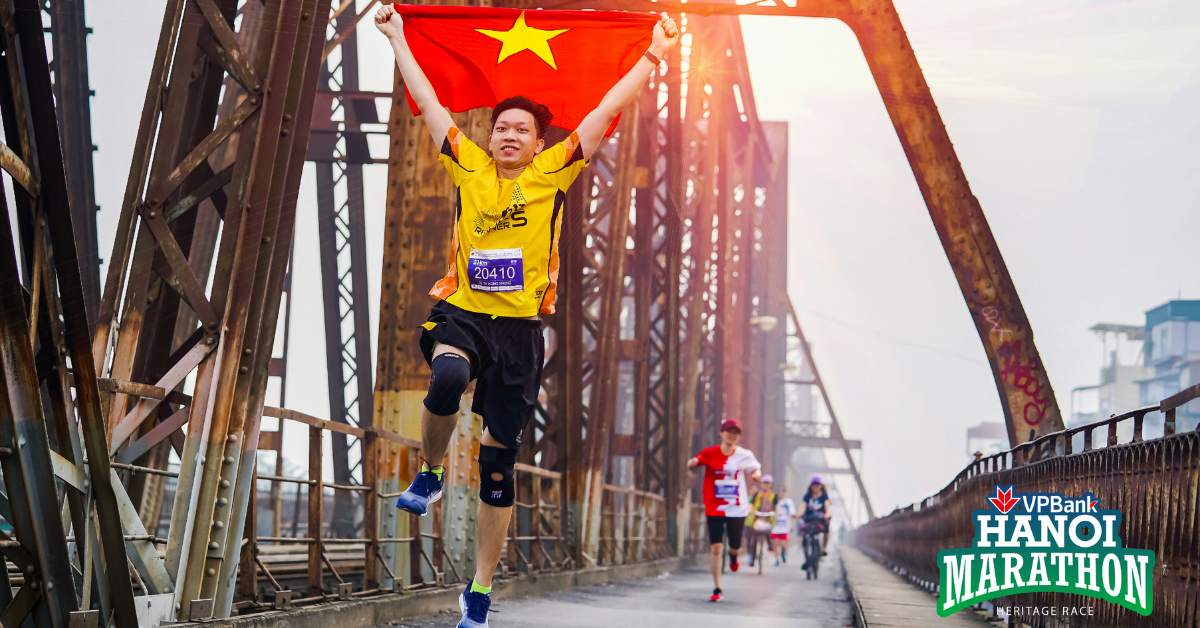 The start and finish venue of Hanoi Marathon – Heritage Race is located right by Hoan Kiem Lake, the symbol of Hanoi. It’s famous for the Turtle Tower, a small, ancient and quiet tower situated on an island in the middle of the lake. Right nearby is Ngoc Son Temple, situated on a different island and connected to the mainland by a small, red, wooden bridge that highlights the fresh green lake water.

Was built in 1901, the Hanoi Opera House is a miniature copy of Opéra Garnier Theater. The Opera House is characterized by the French New Age and is one of the most important cultural centres of Hanoi.

St. Joseph’s Cathedral Hanoi was built in 1884, in the medieval Gothic architectural style, with an arched dome facing the sky, much like the Notre Dame in Paris.

4. The Flag Tower of Hanoi

The Flag Tower of Hanoi was built in the early 19th century, by the Nguyen dynasty, the last dynasty of Vietnam. This is also the most preserved historical landmark of Hanoi.

5. The Temple of Literature, the Imperial Academy

The Temple of Literature is a collective of complex monuments built in the 11th century in the ancient East Asian architectural style. This is also a monument that symbolizes the cultural development process of Vietnam with 82 steles honouring its graduates from the 15th century to the 18th century.

Tran Quoc Pagoda is a Vietnamese Buddhist centre from the 11th to the 15th century. It is an 11-story-tall tower with a height of 15 meters. Each floor has six fenestras and in each, a statue of Amitabha (the celestial Buddha) made from mineral stone.

The Quan Thanh temple is one of the four ancient towns of the antique Thang Long Citadel, built in the 11th century.

Cua Bac is one of the few remaining traces of the ancient citadel of Hanoi. With traces of destruction from bombs and bullets, Cua Bac is also a marker of French colonialism and the First Indochina War in the mid-twentieth century. Opposite to Cua Bac is the Cua Bac church, built in a unique Asian–European fusion architectural style.

Was built in 1898, Long Bien Bridge is akin to a witness to one of the most turbulent periods of Hanoi’s history. It was built by the French and considered their pride of in Indochina, and was also where French troops finally withdrew from Hanoi after the Dien Bien Phu victory. During the Vietnam War, the Long Bien bridge was heavily bombed by American planes but remained standing, as if firmly representing and instating the spirit of the Vietnamese people during the war. Today, Long Bien Bridge has become a favourite place of Hanoians. From the bridge, you can admire the entirety of the modest and rustic charm of the outskirts of Hanoi: small green rice paddies by the tranquil river.

O Quan Chuong is an ancient city’s gate situated in the middle of modern Hanoi. It used to be a security checkpoint for the commercial district of ancient Hanoi, what is now known as the Old Quarter. O Quan Chuong was named after a chief of the army to honour him and other Nguyen soldiers who fought in the war against the French.