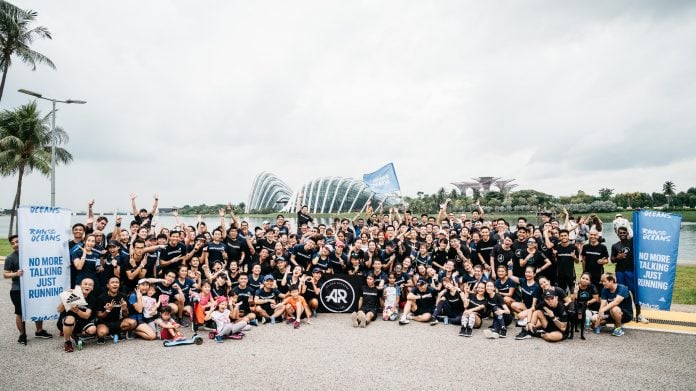 SINGAPORE, June 11, 2019 – Bright and early on World Oceans Day (8 June), more than 320 runners in Singapore rallied together at the adidas Run For The Oceans 2019, running in unison along the city’s Marina Bay waterfront to take a stand against marine plastic pollution.

Members of public, adidas employees, the local adidas Runners community and the brand’s creators (the brand term for ambassadors) were mobilised in adidas’ global fight for the oceans, literally taking steps together to raise awareness of the threat plastic waste poses to our oceans, and up the pace of change for future generations.

Running along the water’s edge, participants including musician Benjamin Kheng, actor Danial Ashriq, and host of the event and 987FM radio personality Kimberly Wang, chalked up between 4 to 7 kilometres each through the Run For The Oceans challenge via the Runtastic app. For every kilometre run, adidas contributes US$1 to the Parley Ocean School (capped at US$1.5 million).

Globally, adidas runners have clocked over 3 million kilometres since 8 June, reaching the target amount of US$1.5 million raised for the Parley Ocean School to educate youths on the issue of plastic pollution and inspire long-term behavioral change. In Singapore, runners have racked up more than 10,000 km – that’s US$10,000 – to date!

At the event, local singer-songwriter Inch Chua and food and travel writer Victoria Cheng, both advocates of environmental sustainability shared their personal experiences and encouraged participants to take action by incorporating sustainable habits in their day-to-day lives. Through educational zones at the venue, participants also learned more about the impact of their participation in Run For The Oceans and the transformation journey of ocean plastic waste into an adidas x Parley product.

Reflecting on his own journey towards sustainability, adidas Runners Singapore captain Eugene Lim shared: “We can each play our individual small roles to make a huge positive impact on our oceans together. I’ve started to be more mindful about not taking plastic straws or plastic lids when I can, bringing reusable tote bags when grocery shopping and when I do receive plastic bags, make the effort to reuse them.”

Petr Stastny, Country Manager, adidas Singapore, said: “We believe that through sport, we have the power to change lives. With adidas Run For The Oceans 2019, we harness the power of sport to raise awareness about the state of the oceans and inspire positive action. We are extremely heartened to see the strong turnout at Run For The Oceans 2019 in Singapore, and the enthusiasm and ownership among our runners for this cause. Every kilometre, every step counts; together, we can make a marked difference and create change.”

Join the movement and spread the word!