The inaugural International Bintan Marathon was held on the 9th of September 2018 with Full Marathon (FM), Half Marathon (HM) and a 10km Charity Run on offer and I was there for the Half Marathon though I actually would rather do the Full Marathon. I shall touch on the reason for the change later.

We arrived at Tanah Merah Ferry Terminal about an hour before our ferry departure time. The place was rather packed I would say. It was free seating on the ferry and the journey from Singapore to Bintan’s Bandar Bentan Telani Ferry Terminal took us about an hour. 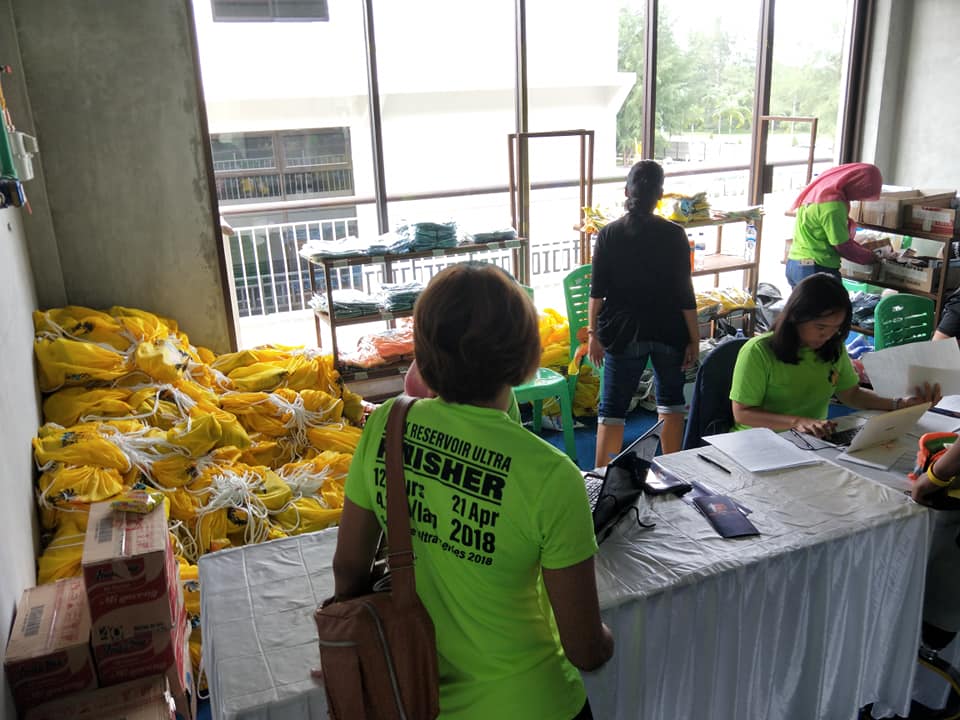 Breakfast was arranged to start at 0330hrs for participants at our hotels. Thereafter there were shuttle buses leaving every 15mins from 0300hrs till 0445hrs. Our HM was supposed to start at 0600hrs but after some recce the previous morning, the organisers decided to bring it forward to 0530hrs to minimise the time runners may be caught under the sun. So after having our breakfast, we took the 0430hrs bus to the Start Point, which was at Plaza Lagoi too.

Upon arrival around 0445hrs, we saw the Full Marathon runners gathering at the Start Line awaiting flag off. I was not surprised when we noticed there were actually not many runners in this category as I was kinda expecting this. Shall explain why later.

The MC did the usual pre-race talks and there was even a pre-recorded safety briefing being played. At 0500hrs, which was the flag off time for FM, the MC was still talking. There seemed to be some kind of delay though he never mentioned what was it. At around 0510hrs, he introduced the VIPs and they gathered before the start line for photo shooting. Then finally at 0515hrs, the Full Marathon runners were flagged off. A good 15mins delay. Hmm……

We then started to move towards the start line for our flag off at 0530hrs. Again the MC chatted with some of the runners, then we did some light warm up and soon 0530hrs came and went, but we were still there. It was only at 0535hrs that we were flagged off.

Though it was still early in the morning, visibility was not an issue as there were ample street lights along the way and the day broke soon after.

The HM route consisted of either mostly tarmac public roads and some concrete pavements. Roads were not entirely closed off with traffic cones placed along the side of the road as markers to our running path.

We felt pretty good during the run and maintained a rather consistent pace. We were also blessed with perfect weather with the forecasted thunderstorm nowhere to be seen and the sun only turning on its heat when we were at our last k. Somewhere after the 6km marker, the 3 leading runners from the FM category ran past us. They had a 20mins lead on us but when we had just cleared 6km, they had already cleared their 18km mark. 20mins earlier than us but 12km more than us. Haha. No wonder they are the champions. Am always awestruck by how they ran seemingly effortlessly..

Runners were pretty spaced out as there was not many runners unlike our local runs. Nonetheless we still managed to run into quite a few of our friends especially those doing the FM.

Distance markers were placed 2km apart and were very prominent. Also, at every junction there were marshals/police there to stop traffic for us runners so I must say the traffic was pretty well managed. We did not forget to thank the marshals/police whenever we could just to show our appreciation to them for keeping us safe.

Water stations were placed every 2-3km apart with water and Pocari Sweat available (only the 10km station has no Pocari Sweat) so hydration should not be a problem for runners though only 2 of them have mini bananas. We stopped for our first drink at the water station around the 6km and we immediately noticed a problem; there were no trash bins. So soon after we started to see cups littered along the way. We only saw a bin at the 8km water station but then it was placed before the table with the drinks. Weird placement. Subsequent water stations do have their bins placed after the table (though it was just 1 bin at each water station) with drinks but they are like less than 1m away. So either we drink and take the cups with us (carry with us or throw away along the way) or we can stand there, finish our drinks before disposing the cups and carrying on our run. I guess whoever planned this is not a runner himself thus the flow sequence was not very smooth.

Weather along the way was great I must say. Even the early morning breeze was very cooling. Thunder storms were forecasted but luckily for the runners the weatherman got it wrong this time. The HM route consisted of a couple of long straight roads so it may get a little intimidating for some especially when they see seemingly endless roads ahead. There were nary any hills (total elevation gained less than 70m) with the only possible problem being boredom. There were not much scenery for us HM runners until the last 2km or so thus the run may be too monotonous for some.

Our finishing medals were given to us right after we crossed the finishing line. I always like it when medals are given by hanging them around our neck. As we walked further into the race village, I started to ask what about the finisher tee and a runner told us we can collect our tees at a booth nearby. It may be good to have that booth placed right at the start of the race village so nobody will miss it.

There were fresh coconuts being served there for runners but surprisingly there were no food. Not even bananas. There was a food bazaar nearby where we can purchase snacks but we did not go over.

So we took our finisher tee, waited for some friends, took some photos, before boarding the shuttle bus back to our hotel.

The run itself was pretty well managed with sufficient marshals around to assist runners as and when necessary and more than sufficient water stations. As mentioned earlier, some areas that can perhaps be improved/relooked at;

Now, there are some administrative/logistics areas/issues that I think can be worked on;

The initial hotel check-out time was 1100hrs. The FM starts at 0500hrs and has a cut-off time of 8hrs. Meaning the FM will officially end at 1300hrs. See the problem now? At the end of the FM, the runner will have no room to return to. Granted, most runners will not need 8hrs for a FM. But if the official end time of your FM is 1300hrs, how can your hotel check-out time be earlier than that?

Given the way I approach FMs with photo stops along the way, I may be able to return within 6hrs which is 1100hrs but even then my room would also no longer be available. We were told we can ask the hotel during our check-in for a late check-out but we cannot plan our itinerary based on a ‘maybe can late check-out’. What if our request are denied only after we arrived? We then have to check-out before going for our run?

I guess this could be a major factor why there were only 93 FM runners. If the organiser can arranged for a 1500hrs check-out with all the hotels/resorts, giving all runners a minimum of 2hrs buffer time to complete their runs, board the shuttle bus, return to their hotels, wash up before checking-out, I believe there might have been more FM runners. Runners should not have to worry about rushing back in time for a check-out.

If you are looking for a pretty flat course to do a speed test, this might be an option for you considering the excellent support during the run and the flat route. Even if the administrative/logistic kinks I mentioned are not ironed out next year, it should not affect HM runners much. You just need to prepare your own breakfast.

If you intend to do the FM, besides the issues I mentioned, you will need to be prepared for the weather as some of my friends who did the FM were torched under the sun before being rained on by the late morning heavy downpour. But then again, these are part of running outdoors afterall yeah 😉.

The 10km Charity Run starts from the Bandar Bentan Telani Ferry Terminal and ends at the same place as ours which was the Plaza Lagoi. Most of those I know who did this actually only arrived in the morning itself as the flag off was only at 0830hrs. So for those who tire of running in the local 10ks, you can consider popping by for a short day trip with a 10km route thrown in.

Bintan is 1 hour behind Singapore time. So do remember to set your watch/mobile phone accordingly. We have a friend who did not do so and woke up an hour later than planned and had to cab over to the starting point. 🙊 But he still managed to catch us before we were flagged off.

Hopefully there can be some route tweaks next year that allows runners of all categories to see more of the nature habitats Bintan has to offer. And a better finisher tee perhaps? 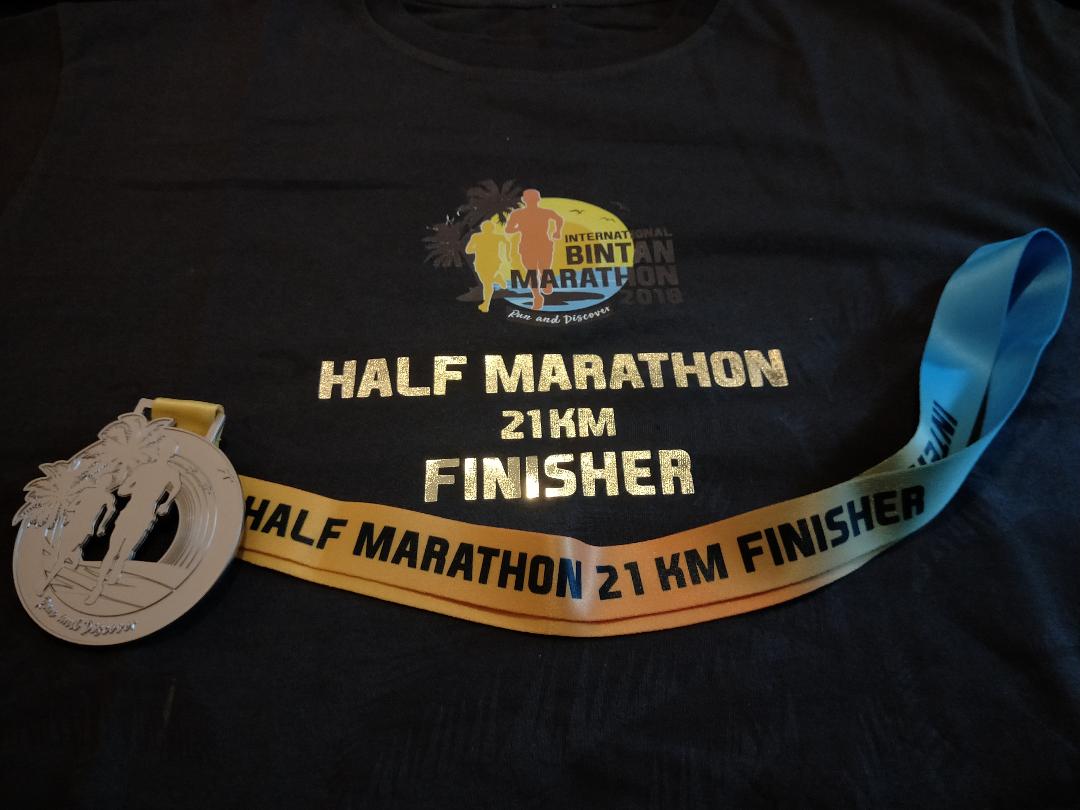 This was a fully sponsored trip courtesy of Bintan Resorts facilitated by JustRunLah! and I thank them for the arrangements.

When I first received the invitation for the trip, one of the first questions I asked was can my run report still be objective as was always the case in my past reports. I was given the assurance that I am free to write as I deem fit as the organisers were also looking to gather feedback from the ground in order for them to improve on any possible shortcomings. The invitation has in no way affected my view and feel of the event as I always believe an honest report is the best way to give other runners a real look on the ground to let them make a better judgement call if they should participate in subsequent events.