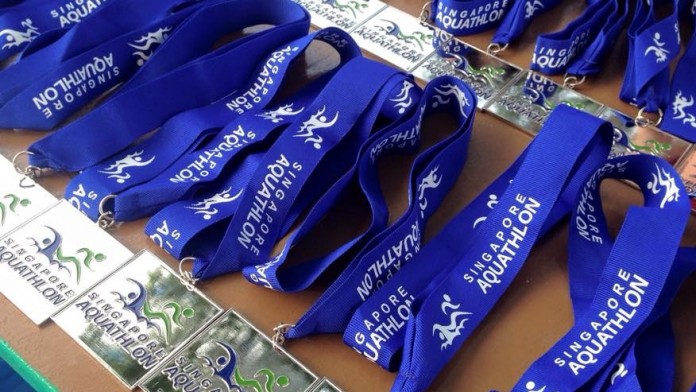 Disclaimer: my race slot was sponsored by MetaSport, the organisers of this event, in return for a pre-race write-up and a post-race review (this).

As with my other reviews, I attempt to provide a thorough and objective recount of my experience. Do look out for the font in italics as they’re aspects which I feel are important in a race.

REPC was held on Tuesday (1st September ’15) at City Square Mall from 11.00am-8.00pm. A single weekday for collection was certainly not the most favourable for me (and perhaps other participants), though an alternative was available. One could fork out a hefty $28 for delivery via courier to be delivered to the intended address on 3rd Sept. Having collected my race pack just before 5pm, collection was swift. The race pack consisted of the colour-coded swim cap, the event tee, a timing device, the bib, a transition area entry tag and some brochures. I noticed two booths at REPC – one featuring some merchandise by JustRunLah! and the other featuring PURE Sports Nutrition, the hydration sponsor of the race.

As this was to be my first multisport event, in addition to a couple of races lined up for the next few weekends, I decided that the Sprint category would be the most suitable for my inexperienced self. The 750m swim and 5km run sounded pretty manageable. The cost of registration wasn’t a factor in my consideration as my slot was sponsored by MetaSport.

I arrived about an hour prior to my category’s flag-off (9.10am). I was new to the conduct of an aquathlon, hence I took some time to observe a few wave starts and transitions before preparing my transition area (entry was exclusive to race participants), depositing my bag, getting the body marking done and thereafter going for a brief swim. The race venue was conveniently located near the East Coast Lagoon Food Village. That meant that public restrooms were easily accessible, along with the sufficiently large Carpark E2 for participants/supporters who drove. I noticed multiple signs reminding participants to return their timing device after the race.

Minutes before flag-off, us yellow capped participants began waiting outside the entry pen. Thereafter, we were ushered onto the beach in preparation for the running start into the sea. Kayaks and other safety personnel were stationed around the course. Promptly at 9.10am, we were flagged-off! The first 30m of the swim was arguably a mass (or mess) of flailing bodies, stumbling and floating all over one another. This was to be expected considering I was not starting right at the back nor was I one of the faster few at the front. I took care to minimise my kicks (for the safety of those behind me) while guarding my face with my arms (lest my goggles came flying off). It wasn’t long however, before participants strung out.

The swim route took us out to sea, before we swam (nearly) parallel to shore and then headed home. The specifics are best described with this image below. I’ve traced the route I suspect I took (in light blue) and as you can see, I’ve some room for improvement 😎 My only defence is that on the way out to sea, it seemed like many participants were around me. Maybe the tide? 😛

After the swim, it was time for transition! I had previously laid out my relevant belongings at the transition area allocated for me, approximating 50cm x 50cm (definitely adequate). This was my first ever chance to attempt a transition, hence I wanted to establish a systematic sequence while optimising my comfort for the run. Therefore, I took quite a while…

Thereafter, it was time for the run! As running was my primary discipline, I was certainly comfortable with the task ahead. The run route took us eastwards, thereafter along a portion of Bedok Jetty before continuing eastwards towards Water Venture (East Coast), before heading back towards the finish. It was a largely flat route hence definitely a pretty fast one. Hydration stations were certainly sufficient along multiple points of the route, serving both PURE Sports Nutrition’s drinks and plain water. Distance markers were available every 1km. In my opinion however (and my Garmin FR15 agrees), the course was short (my Strava data is available here) by about 200m. Having participated in multiple races prior (read all about them here), I’ve come across multiple instances whereby there were discrepancies between the official distance and the actual distance, while some have made great attempts at getting the actual distance to be as accurate as possible. Admittedly, GPS devices aren’t perfect and may underestimate distances. Nonetheless, I’m convinced that 200m over 5km is quite certainly not solely due to GPS discrepancies.

Having said that, other aspects of the run were faultless. As I approached the Finish, it was encouraging having my name called out over the speakers 🙂 It’s a small act, yet it’s empowering and really encourages everyone to finish their race strongly!

Right after crossing the finish line, the timing device was removed by volunteers and a Finisher’s Medal was placed around my neck. It was a generic medal that did not differentiate between categories. Live Results were accessible as well (Official Results were promptly released later that afternoon!). It was nice that plastic chairs and tables were laid out for finishers and supporters, a feature I don’t recall seeing elsewhere. A hydration point serving PURE Sports Nutrition and plain water was available, in place of the typical 100-Plus cans that I receive after a running event. In addition, official race photos via Finisherpix were available on Monday evening, two days after the conclusion of the event 🙂

That’s it for my attempt at an objective review of the Singapore Aquathlon 2015! Feel free to check out my personal experience of this race here. The nature of a multi-sport event adds a whole new dimension to racing. I’m sure many of us have only tried running events, therefore I’d encourage everyone to have a go at a different discipline sometime 😉