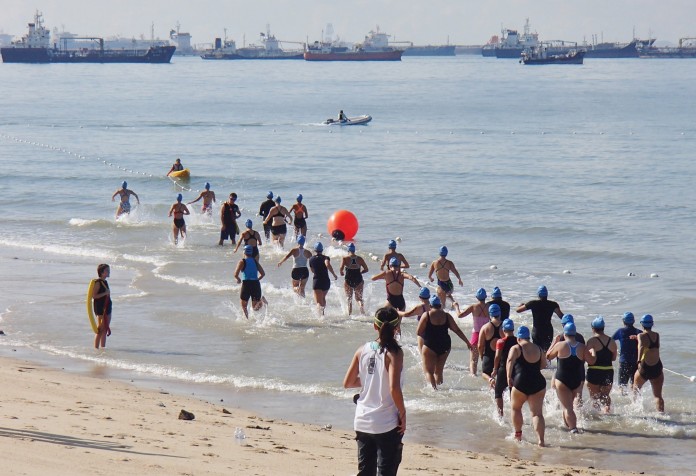 The Trifactor Swim was the first race I could enter after eight weeks laid up with a fractured ankle.  I missed out on the Green Corridor and the Ultra Marathon but I was not going to miss out on the Trifactor Series.

The swim was the first race in the Trifactor Series and I was originally signed up for the 1500m swim.  Two months out of training, I would have been foolish to tackle the distance.  Luckily the Trifactor team helped me out by downgrading my distance to 500m.  Still not fully recovered I figured with a firm ankle guard and minimum run/walk on sand I should be okay to swim provided that I didn’t need to kick.

With only six swim training sessions of which four were the week before the race, I hoped that I had enough fitness still left in me to see me through the race.

Come race day and I was a bundle of nerves.  Scared about my leg, scared that I may not be fit enough and just about everything else I could conjure to mess up my head completely.  What I didn’t anticipate of course were goggle problems.  What could have been a terrific swim, since I thought the sheltered Tanjong Beach Sentosa was a great location, turned into a very frustrating swim.  All because of leaky goggles.

I spent 80% of my race breaststroking and each time I tried to freestyle my goggles would just fill up with water.  An extremely tiring way to swim for sure, towards the end I managed some version of freestyle without fully immersing my head into the water just so I could stretch my arms out and make some tracks in my swim.

Eventually I surfaced at 15:20 minutes which was incredibly disappointing given that I can usually knock it off in under 12 minutes.  I’m reasonably new to swimming (about 12 months) so I am not fast but I am definitely better than 15+ minutes.

The humorous element in all this was that given my veteran category, I still managed to place second.  But wait there were only three in my category so I would have placed regardless.  It was quite a surprise and didn’t know till my girlfriend, Michelle who also swam the 500m in 13:46 minutes let me know a few days later.

Off I went to the Trifactor offices to collect another medal and a new pair of goggles.

The day was not a complete waste since I always enjoy the company of my fellow Team Costans.  As mentioned above Michelle raced the same category as myself, hubby completed the men’s 500m category, Veronika tackled 1500m (with very little training) and Jeff challenged himself with 3000m.

The severe congestion of the longer distance meant that many of the swimmers were slowed in their pace trying to get around or over the top of others, lots of kicking in the face or body was taking place and made the race less pleasing.  To reduce the congestion the women’s 500m category was delayed by 10min which made the swim for Michelle and myself a breeze and free of congestion.

With our kids in tow, cheering on we finished up the day at the Port of Lost Wonder.  We had our race, and the kids had their fun.

As part of the official South East Asian (SEA) Games, Singapore tacked on a swim race for the public in which Michelle and I participated.  I was particularly interested in this race because it gave me another opportunity to race 500m and hopefully improve my timing and preferably avoid leaky goggles.  Even better it was held in my backyard at Angsana Park on East Coast Park.

Approximately 35 participants entered the open all women’s category.  Michelle was super excited whereas I was extremely nervous.  I figured the nervousness was a result of little real competition experience and the constant adrenaline spikes were just simply uncomfortable and counter-productive.

Anyway, as we prepared to enter the racing pen one look over our shoulder at the four 16 year olds, in their swanky bathers and athletic builds we knew we were done for.  A bit hard to be 30+ and 40+ mums trying to compete with teenagers.  We were whipped by all of them.

The extremely low tide hindered our best timing given the nearly 70 meters we had to run/walk before we could reach deep enough water to swim.  Since I’m still recovering and unable to run it was tough covering the distance by hobbling and landing on exposed rocks.  I was tired before I even started.

However, I was pleased there was no leaky goggles and the sea was reasonably pleasant in comparison to Tanjong Beach where we came out filthy.

I perhaps started out a bit too hard trying to make up lost time with walking but it was unsustainable.  Michelle on the other hand took the chance to run in as fast as she could.  She settled into the 6th position and held it all the way to the end. Towards the end she was competing against two other swimmers and with her toughness and competitive spirit she turned her legs into hyper-drive and powered through her swim leaving them behind.

Whilst I managed to overtake five other women and caught up to Michelle, I overtook her a couple of times but just couldn’t hold the pace.  When she went into hyper-drive her legs were like a motor in the sea.  I got a good splashing in the face and she left me in the dust.

For the last 100m I had a swimmer behind me at only one arm’s length distance and I was determined not to be overtaken.  So when I reached sand, I hobbled and hopped and moved as fast as I could as I wasn’t about to be overtaken in the last 20m.  Needless to say when I crossed the finish line, I needed to lie down and catch my breath.

I have mixed emotions about this race from a personal achievement perspective.  Having to walk so much reduced my swimming energy and again didn’t feel like it was my best performance but I guess there are no perfect situations so I’ll just have to keep doing the shorter swim races before I consider anything lengthier or more challenging.

On a positive note, it was great to participate in a race that celebrated the spirit of the SEA Games that hasn’t been held in Singapore since 1983.  An excellent time to be host to the games given Singapore’s 50th year of independence from Malaysia.  I feel privileged to participate.