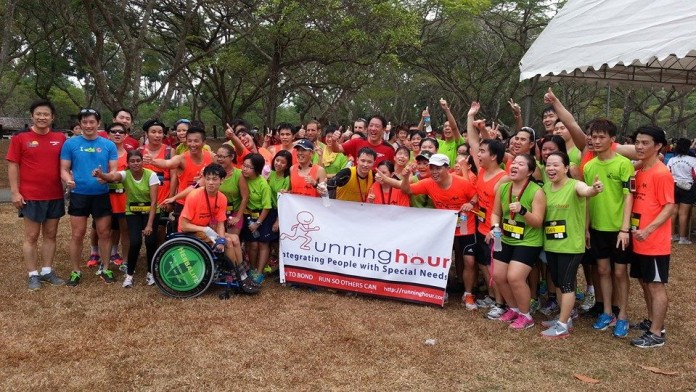 March 2015 brought with it a rollercoaster of emotions for the Singapore running community. Whilst our calendar was packed with popular running events, the passing of Mr Lee Kuan Yew, our nation’s founding father, led to postponement and cancellation of some activities, while bringing a sombre note to others.

Yet, in our grief and sorrow, we recognise and are grateful for all that Mr Lee has done for us. He had built a safe, disciplined and prosperous nation, so that we are free to enjoy and pursue our dreams. May the spirit of courage, determination and perseverance in Mr Lee Kuan Yew live on in all of us runners, and continue to inspire us daily towards loftier goals and aspirations.

The 5km Venus Run in celebration of International Women’s Day changed its programme to an early morning start, as compared to being an evening race as in the previous year. The race nonetheless drew a sizeable crowd of women and children, with Vanja Cnops clocking in at 19:22.2, emerging as the overall winner. The event fared well in all aspects, scoring an overall experience satisfaction of 3.9/5 by our users. With over 7000 runners representing 69 different countries, the long-awaited Green Corridor Run was a resounding success this year. The unique 10.5km trail run offered runners a one-of-a-kind experience in Singapore, and runners received a booklet put together by the Nature Society and the Singapore Heritage Society, containing a map which marked out and described heritage locations along the route.

The race scored well on all aspects, with the overall experience rated as 4 out of 5. To read our JustRunLah! bloggers’ first-hand and in-depth experiences of the event, check out our bloggers’ race reviews.

In conjunction with Singapore’s World Water Day, some participants chose to run with jerry cans of water, an eye-opening experience of the daily challenges faced by the populations in developing countries, of accessing potable water.

Ran at the Green Corridor Run this year? Check our photo gallery to see if you were captured by JustRunLah!’s photographers at the event! RunningHour 2015 was conceived with the goal of integrating people with special needs. Much more than just a race, the event was an opportunity for runners to interact with those who tend to be marginalized in our society, and bond over the simple and joyous activity of running. Some brave runners also took the challenge up a notch by choosing to experience sightlessness with the blind-fold run. All participants of the event deserved applause for their courage and determination.

The race scored average in hydration, amenities, runners’ entitlement and race day activities, but fared better in pre-race logistics and route planning. The overall experience was rated as 3.6 out of 5. To read our JustRunLah! bloggers’ first-hand and in-depth experiences of the event, check out our bloggers’ race reviews.

Ran at RunningHour this year? Check our photo gallery to see if you were captured by JustRunLah!’s photographers at the event! Almost 400 participants registered for the NUS Biathlon this year. JustRunLah! users have rated the event highly on all aspects, giving the overall experience a 5/5 star rating, although the organisers have apologized for the incomplete records due to manual time-keeping for the swimming component.

The 5th edition of the Twilight Ultra Challenge was a resounding success, with 236 finishers brave souls completing the challenge, and Singaporean Wong Hoong Wei setting the new course record of 160km in 15 hours and 55 minutes. The event also paid tribute to Mr Lee Kuan Yew, with runners observing 91 seconds of silence before commencing the race, and event organisers designing a special panel for runners who wish to run 91km in memory of our late first Prime Minister. Notices on Postponed and Cancelled Events

The 4PM FUN:D Run 2015, originally slated for 28 Mar 2015 at East Coast Park Big Splash, has been postponed due to unforeseen circumstances. Organisers have advised for participants to visit their Facebook page for information updates.

The 2XU Compression Run 2015, originally slated for 29 Mar 2015 at the F1 Pit Building, has been postponed in the wake of Mr Lee Kuan Yew’s passing. Organisers have advised that the new date will be confirmed by 10 Apr 2015.

The FairPrice Walks With U, originally slated for 29 Mar 2015 at the OCBC Square Singapore Sports Hub, has been cancelled in the wake of Mr Lee Kuan Yew’s passing. Organisers have announced that all proceeds from participation fees will go towards charity. Participants who have collected their goodie bags and event T-shirt need not return these.