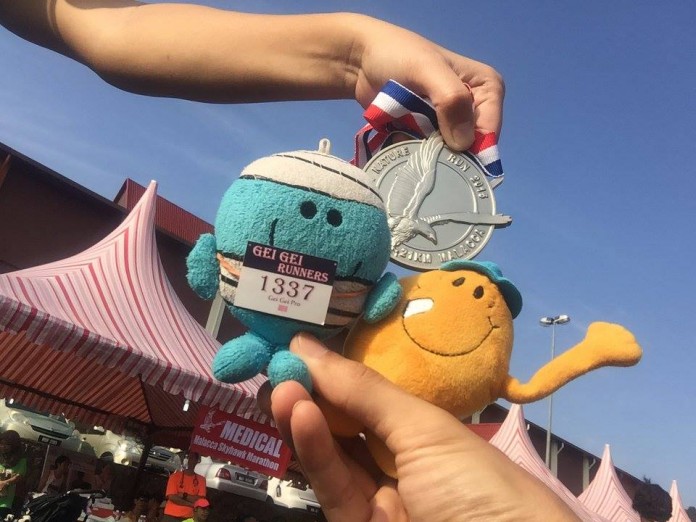 My Human is one who is easily bored.  Despite only flirting with the “local running scene” for slightly more than a year, her constantly roving eyes have their sight set overseas (yes, Malaysia is overseas).  Hence it was no surprise to me that she should register for the Skyhawk Nature Run 2015… way back in July 2014.  LOL ~ yep, that is how kiasu a person she is.  Anyway ~ some of my plushie friends and their Humans we interested as well, and hence, we all attended the race together (duh).

We departed for Malacca on a Saturday morning coach from the Queen Street Bus Terminal.  The 4hr-or-so ride was uneventful.  I spent most of the time either watching the Human poke around on the PS Vita, or snoozing. Upon arrival, it didn’t take long to spot our accommodation – Casa Blanca Guest House, right across the parking lot from where we alighted.  We checked-in, hovered around a little, had lunch along Jonker Street (yummy chicken rice balls!), and took a cab out to collect our race packs.  There we hung around at the Brooks booth @ the race pack collection, where the Human tried on a pair of running shoes… she would have bought it, if only they had a pair in her size. Explored Malacca a little after that, ate more food, went to the night market… then it’s off to have an early night.

Sunday started really early for everyone.  At 4am, the Human’s alarm went off, and I could hear her curse under her breath (as usual).  Really, I am certain that waking up is the worst part of running events for her – there have been a few events that she DNS-ed in favor of more Z-s!  Not for Skyhawk, of cos!  Our chartered van came to pick us up from the hostel at 5am and everyone was in pretty good spirits. Gosh, the atmosphere there was pretty lively at that hour, I must say!  And is it me, or does it seem that about half the participants are Singaporeans?  LOL That aside, the Human got a tad cold, standing around waiting for the race to start keeper check, playlist check, gummies check… and soon it was off we went!

As usual, our little running group broke apart upon crossing the start line, each running at his/her own pace. The route was refreshing, though a tad hilly.  Round the countryside, past housing areas, farms… etc.  A great change from the scenery that runners are accustomed to in Singapore.  The support was awesome – sufficient drinks at the nicely spaced water points, fresh fruit at one of them, volunteers directing the runners and cheering everyone on.  Oh ~ not forgetting the villagers who stood outside their houses and waved at bypassing runners!  I wonder if they knew how much that encouragement meant!  I could see the Human smiling widely despite struggling along with leg pain (doc suspects itb issue) after 12km. She crossed the finish line at 02:51:26, according to RunKeeper.  Her worst result till date, but I think she is satisfied that she managed to complete the entire course.

Post-race was amazing.  There were isotonic drinks, bottles of water, bananas, ice cream, some kueh and a truck serving up small satisfying portions of Mamee noodles! The rest of the day was pretty much food, rest and a food massage, before we took the 4:30pm coach back to Singapore.

A pleasant well supported race not too far from home.  Definitely worth the weekend “road trip”.