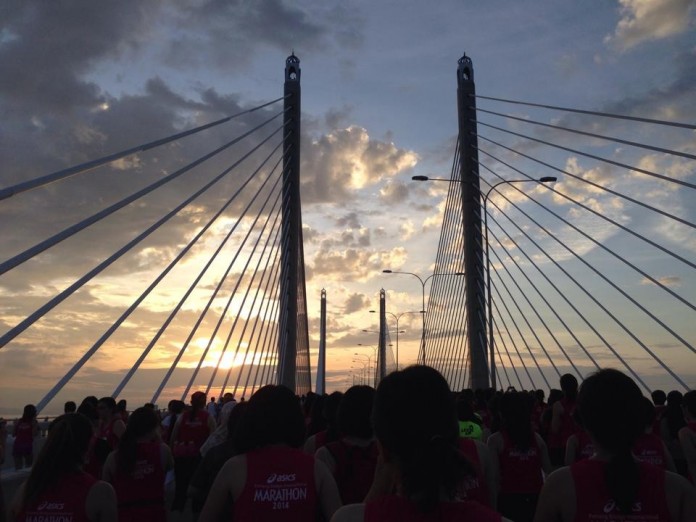 The Asics Penang Bridge International Marathon (APBIM) held on 16 November 2014 is touted as the world’s longest bridge marathon. Held every year since 1985, the run is opened to people from all over the world. It is also the only event and time of the year that the national landmark is closed to traffic. Organised by the Penang State Tourism Development Committee, this year’s race was held at the new 24km Penang Bridge for the first time.

The PBIM is a much anticipated annual event and almost every Penangite knows about the event. Indeed, the event is so popular that all Penang hotels were fully booked over the weekend and we met with some slow traffic on the roads. Nonetheless, the race did bring energy and buzz to the lovely “The Pearl of the Orient” island which is rich in heritage and famed for its delicious street food.

From Singapore to Penang

I have always been fascinated with bridges, so obviously I was interested to do a bridge run. Thus, when I learnt a couple of other friends were going this year, I decided to join them. Eleven of us flew together to Penang on Friday evening and the next day, we collected our race packs. We also visited three malls, shopped (a bit) and ate (a lot).

The organisers offered free shuttle buses from certain pick-up points to the start point but we knew that with a huge crowd, we decided to play it safe and booked a van with the hotel to bring us to the start line. We left the hotel at 5.45am and reached the race venue at 6.20am which gave us sufficient time to be ready for the 10km flag off.

At 7am, the women’s open category were flagged off and when I realised I couldn’t really start running due to the sheer numbers, I decided to enjoy being in the moment – how cool the weather felt at 26 degrees, the gentle slope as we moved up the bridge, the sun peeking out from the far side of the horizon waiting to rise further. This was when I decided to whip out my handphone to take a picture, but first I had to ensure that it was safe and no one would crash into me if I were to stop. Then again, everyone else was doing the same thing!

There was absolutely no shelter on top of the bridge and because I wanted to take advantage of the “coolness” before the sun rose, I knew I had to RUN. This was when the “weaving” began. I found myself zipping in and out of human traffic and was amazed at the numbers that were actually just strolling (or taking pictures) on the bridge! Alright, the clumsy me had to be really careful not to bump into people when I navigated through the crowds.

For 10km runners like me, the u-turn was at the 5km mark. But it was only at the last 3km when we were allowed to merge with the other half/full marathon runners on the opposite side of the bridge. This was when there was more space to run and those who wanted to pick up their pace could actually do so.

At the end of the run, we collected our medals and were treated to various booths of Sunkist orange, Revive isotonic drink, nestle cornflakes, milo, and even milo ice-cream! Boy what an awesome morning it was!

Overall, the run was a smooth and enjoyable one and all 11 of us thoroughly enjoyed our quick weekend getaway to Penang with much fun, food and camaraderie. Best of all, we conquered the longest bridge in South East Asia… oh well, at least part of it 🙂

Last but not least, if you are thinking of doing the Penang Bridge International Marathon next year, here are some tips: