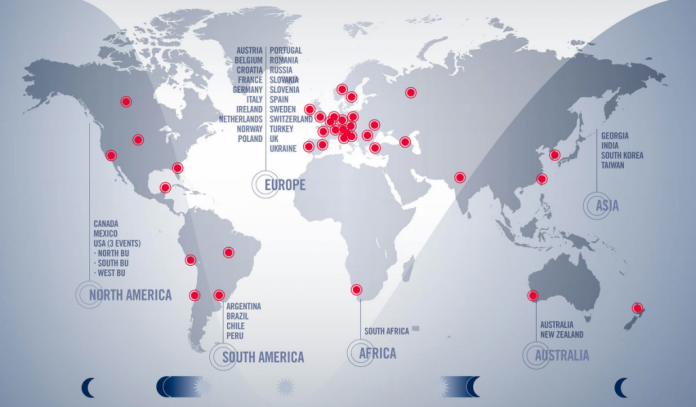 Run For Those Who Can’t

A totally new type of running event, organised for a good cause, will take place worldwide on 4th of May at 10:00am UTC. East Asia is represented by South Korea (Jeonnam) and Taiwan (Hualien). While registration for Taiwan has closed (participation limit reached), there is still time to register for the race in South Korea and be part for this unique event!

The Whole World Is Running The Wings for Life World Run is an entirely new type of event never before seen or undertaken in either running or any other sporting field. It is a truly global adventure, encompassing up to forty locations, in which everyone runs at the very same time all over the world! 100% of the proceeds from the event will go to the Wings for Life foundation, which funds research into curing spinal cord injury. The run will unite athletes around the world in one race, running for those who can’t!

“What is exciting about the Wings for Life World Run is that it actually has a starting line, but there is no finish line, and I think that concept is magic,” said Olympic medalist Colin Jackson of Great Britain, who is the Wings for Life World Run sports director. “A car will be chasing you down, half an hour after you started. It’s never been done before. You could be in New Zealand, you could be in South Africa, you could be in Great Britain. The races all start at the same time.”

With no finish line ahead — just Catchers Cars chasing from behind — this is a race with a twist. It is the ultimate test of each runner’s boundaries and abilities, with the last person running being crowned the global winner. The Wings for Life World Run ace isn’t just about physiological abilities; it needs incredible psychological strength, too. You’re not just running against the rest of the field in your location but against runners worldwide, AND you’re being chased by a car — it’s an extraordinary challenge even for the best runners. You know where you start, but you do not know your finish!

South Korea Is In!

South Korea will welcome thousands of runners to Jeollanam-do’s Yeongam and Mokpo, where it’s past history and modern scenery were created harmoniously. The race will begin on the Korea International Circuit, home of the iconic Korean F1 Grand Prix. Continuing the trail, one will soon cross the 4,000m Mokpo Bridge and discover its beautiful night view. Eventually the runners will discover Mokpo’s Peace Square which is located on a road running parallel to the ocean. You can’t miss the beautiful glow of the fountain central to the square. Passing the Daebul Industry Complex, which is central to the south western economic stronghold in the local area, you will be able to finish the race at the Yeongam Public Stadium.

Wings For Life World Run runners will experience the city’s historical tourist attractions with its outstanding architecture, beautiful coastline and vast landscapes. Most importantly, running on behalf of those who cannot is a unique global sporting event. Runners will also help in taking precious steps for the foundation in finding a cure for those with debilitating spinal cord injuries.

SIMULTANEOUSLY RUNNING ALL OVER THE WORLD The Wings For Life World Run is the first event in which the entire World can race together, simultaneously. This groundbreaking race format means that on the 4th of May 2014, at 10am UTC, and equivalent times across the globe, thousands of competitors will start to run on up to 35 race tracks worldwide. On this day the world will run as one.

UNIQUE RUNNING EXPERIENCE The format of the Wings For Life World Run is a first in not only in running but also of all sporting events. Routes will be defined but runners will not be running a set distance, as unlike normal races the finish line is chasing them rather than them running towards it; in short you know where you start, but you do not know your finish. This is how it works: half an hour after the start signal sounds and the first runners leave the start line official catcher cars will simultaneously set off at each course, pursuing the runners. This pace will accelerate at determined intervals to a rigid global schedule. When the catcher car passes a runner their race is over and its time to catch the shuttle back to start area and celebrate.

So, what does the Catcher Car actually do? The Catcher Car chases the runners; it’s the moving finish line. When it passes a runner, that runner is out of the race. To give participants a sporting chance, cars start at 10.30 UTC, thirty minutes after the runners have set off. For the first hour, the speed is 15km/h, steady and unchanging, and then progressively increasing.