My Little Pony: Friendship Is Magic is a children’s animated fantasy television series developed by Lauren Faust for Hasbro. Hasbro came up with decision to produce a movie and it will be showing in the Philippines this October 2017. In line with this, the first ever My
Little Pony Friendship run Manila will happen as part of the promotion which markets kids, friends and families. The same event was also held recently in Singapore and Taiwan. 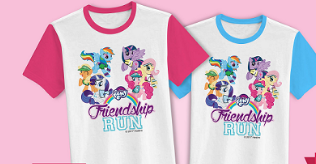