Sensitive topic. Now, it’s still the Phase 2 of COVID-19. Let’s continue to stay considerate and stay safe unless you’re evil and want to see the entire world burn ☹️ The future of this world is still a big question mark.

Because of government laws and regulations of different countries, citizens or people on their land were not allowed out of their home while others willingly stayed home to be safe than sorry. I know of runners who gone coconuts and ran ultra-marathon distances inside of their tiny apartment, on their balcony or even their garage. Some lucky ones had their own treadmill to run on or their house is damn huge to run in.

Luckily in Singapore, during Circuit breaker and Phase 1, we are still allowed out for essential stuffs and exercise with conditions such as maintaining social distancing, exercising with people of the same household only and that unless doing strenuous activities such as running and cycling etc, mask on at all times in the public. Some runners rather stop running and find alternatives such as doing Zumba, Tabata, Yoga etc and stay home to be safe.

Exercising is necessary for some because health may deteriorate quickly especially the elderly, their legs weaken, changes in lifestyle will greatly influence their health physically and mentally. I’m glad that we are not confined, not under lockdown.

Suddenly, there’s a surge of people in the parks during CB. Just be mindful of social etiquette, personal hygiene and safe distancing. I’m actually quite happy as it’s sort of starting point for people to start a positive change in their lifestyle. To go to the park for a stroll, walk, jog or run. It’s something. Phase 2 now and there are still many people in the park be it morning or evening ❤️

When it was February and March this year, COVID19 wasn’t that plentiful and wildly spread yet. I was pretty Garang then and went to Bangkok and participated in a half marathon, as well as to Japan for a vacation even though the Nagoya Women’s marathon got cancelled (only the elites was entitled to run). Then, there weren’t much deaths and cases reported yet, it was still at that period when we were educated as “You do not need to wear a mask unless you are sick” but people already started the panic buying of toilet rolls and rationing food till Sheng Shiong becomes billionaire now.

After coming back, I became overly guilty, worried and paranoid about what if I’ve caught the virus? How am I going to face myself or anyone else if I tio the virus and pass it on to anyone else? I’ll become a 千古罪人 😨  I confined myself to my room and work only. I run lesser and perhaps always being at home rolling on the bed and just looking at all the COVID19 memes, by April, I gained an impressive 6kg in just a couple of weeks! 😨 My colleague even asked me if I’m pregnant 😂 I’m not 😭

So, a few days before circuit breaker kicks in, I went for a run with two friends on a weekend morning. And the scary thing happened. I fainted (Factors to be taken into consideration of why I fainted: Hot weather, no breakfast, not much runs done for quite a while and I’m anaemic). It’s not the first time I fainted, but fainting is actually avoidable. 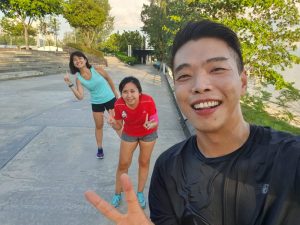 After just an 8km run, we went to Punggol Waterway Point to lim Kak Q(Milo). I FAINTED WHILE I WAS ORDERING FOOD. Yes, I was freaking telling the counter staff I want kaya toast and ice milo then piak, I fainted. I’m sure if I were alone, no one will dare to touch me and I will be lying in that position till the ambulance comes because it did happen to one lady when she was in the shopping mall and I’ll be all over STOMP, Mothership etc and even the on news 🙁  But luckily, I’m with my friend. She was very concerned as she saw the whole faint, that I piak very loudly, head first. It was scary for me but I’m sure it’s even much scarier for her as my eyes were open and I’m unresponsive for a few seconds, she said she almost wanted to perform CPR on me. I regained consciousness shortly, it felt like I’d just woken up from sleep and I wonder where am I. I was lucky there isn’t any sharp objects nearby when I fainted as I can only imagine all the freak stuffs that could have happen.

I’m really grateful and sorry to my friend and I tell myself, NEVER run with an empty stomach again. I can only imagine how frightening it must have been for my friend and I’m in her shoe, seeing any emergency around me, I will definitely freak out and faint together. Ya, so during this sensitive period, especially when the situation of the viruses is not improving, look after your health if not, nobody dares to assist you. If luckily someone heroic did assist you because you’re too handsome or pretty 😏  Then pray hard you won’t become 千古罪人 and pass on any viruses to anyone and let guilt haunt you.

So, I’ve done quite a lot of reading up these few days, and making sense of stuff, I concluded that all these years, my fatness and difficulty in losing weight is caused by anaemia. In short, burning of fats need oxygen, I got not enough oxygen in my blood = Fat. No joke, it’s the answer from Google. Still, don’t let the internet be your own doctor, if anything extraordinary is happening to you and your body, visit a doctor and do investigation tests as well as get treatment. My July’s haemoglobin level is only 8.9 ☹️

So Circuit Breaker comes in and I’m like: I don’t want! 我不要！😭 I like to stick like glue to my boy boy eh 😭 We are not allowed to meet anyone, not of the same household, which means I cannot meet my boy boy. Law means law, still, there are annoying and irresponsible ones posted on their social media that they are meeting people not from the same household to run, run far far away from their own neighbourhood etc.
Reflection: It’s always not OK for others to do something bad, but it feels “Well, it’s not that bad” if you’re the one who’s doing that bad thing. I wish that I have a bigger heart for others as I have for myself, as well as others to have a bigger heart for everyone ❤️  In life(to me), it’s all about humanity in the end. Learn to be a better person each day by doing the right thing, feeling the right way, saying things that don’t hurt people and think in positivity ❤️

No matter what, wanting self-improvement or getting myself into zen mode isn’t easy. I get triggered easily because I didn’t get to meet my boy boy and want this CB and Phase 1 to be over faster and that needs the entire nation’s cooperation. Some people were just strolling without the mask in the park paktor-ing, some were still out fishing when it’s not allowed and cyclists in groups were still cycling together 😖  And the increase of litters around, though some are accidental 😔 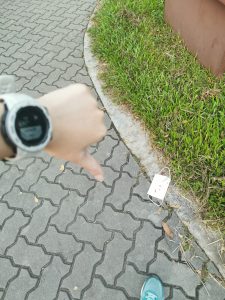 Honestly speaking, I might be one of the people who kena fine the $300 and appear on newspaper with big big headlines like Women fine $300 for finding boyfriend during Circuit Breaker/Phase 1. But luckily, I have someone who makes me a better person. My boy boy and I video chat almost every day to 解相思之苦 ❤️

So it’s a boring circuit breaker. As I didn’t go out much for food and didn’t meet up with boy boy, with the time I occupied myself by running more and managed to shed off that weight that I’ve previously gained with the runningsssss in a very short period.

And finally, it comes Phase 1. It doesn’t feel any much difference than Circuit Breaker because I still can’t meet my boy boy or meet up with any of my friends. I cut down in running again as I have gotten too exhausted 😪 I strongly believe the components/levels of blood affects running and tiredness. I still run, but lesser and I spent most of my time watching seasons after seasons Friends as well as shopping on Taobao.

Then comes Phase 2. My boy boy and I survived the “long-distance relationship” 😆❤️  Prior to this, I have never not seen him for more than 5 days in a row. I deserve a round of applause 👏👏👏 😆 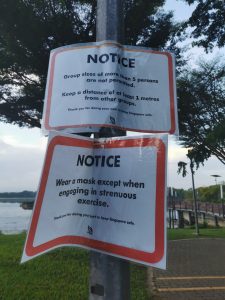 At least now I can meet up my friends for runs, but Safe Distancing rules continue to apply. 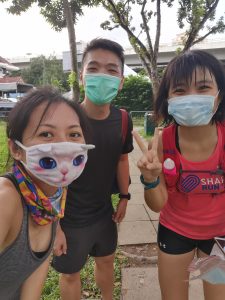 Registering for races and marriages terms and conditions is actually just alike, you agak know what you have sign up for but there is no guarantee that things will turn out perfect. Races kena cancelled, postponed or turns virtual. Some race had already printed their event tees/singlets, their medals. No doubt the 2020 event tees or singlets and the medals cannot be used for 2021, it’s their cost and you paid. So suck thumb only, they gonna mail the entitlements to you, you can’t get a refund as it’s under the long long list of terms and conditions in the event that the race can’t be held or cancelled due to blah blah blah, but we are only given the option either to click on the box to check for “I agree for the terms and conditions”, before entering personal particulars and making payment for the race or not being able to register for the race at all 😆 Lucky me, didn’t sign up for much of the local races yet 😏

2XU Run is postponed, and runners who registered for 2020 still get their entitlements as per their announcement on their Facebook page 👍 Some races announced postponement for a few times and then there are no further updates anymore. Some races let you choose to run virtual arbo it means cancelled. There are sibeh many many virtual runs this year lah! Like run to support healthcare workers, run for Singapore etc

So far the races I registered this year were mostly overseas race. Taishin Women Run(Taiwan) offers a full refund for overseas participants, SCKLM(Malaysia), Hatyai Marathon(Thailand) and Danang Marathon(Vietnam) race slots are brought over to 2021 ❤️ And I look forward to 2021 already 🤩

But I’m one happy girl. At least I enjoyed the first few months of my 2020 to the maximum. I did Skyhawk Nature Run (22km), Amazing Thailand Marathon(21.095km) and Taipei Marathon(42.195km) 😎 Even did my first Ultra Trail, completed a 52km at Macritchie Reservoir 🏃‍♀️ 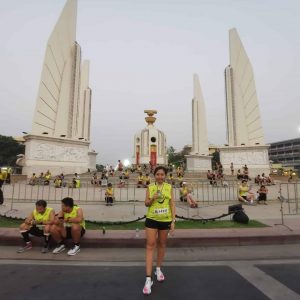 Let’s just hope Singapore can get to Phase 3 sooner as well as other countries improvements in COVID19 situation. Earth is still a place full of wonders and beauty which I want to continue exploring ❤️