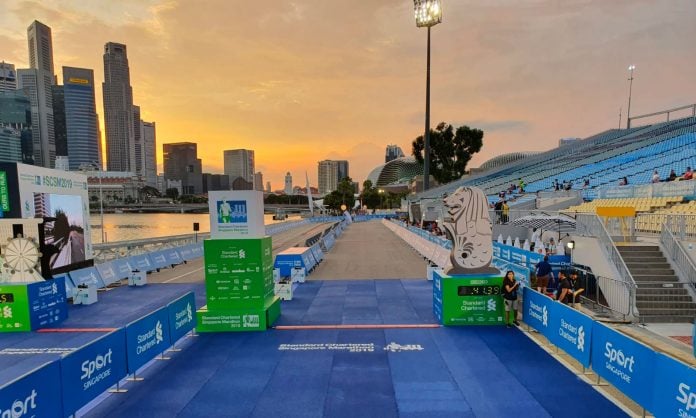 I signed up for the SCSM full marathon because I wanted to double my distance every year since I started running 5km in 2016. I was originally worried about the timing of the race since running in the evening means possibly being more lethargic and heavy. So, I planned my nutrition very carefully for the race day: Cereal for breakfast, Pasta for lunch, Bread for snack, Banana and energy bar an hour before the race. These kept me sufficiently full, contained the sugar that I needed, and did not make me overly full so that I could still run! I also cannot nap on a normal basis, so I lounged around at home watching dramas, which worked!

I was rather nervous before the race, and being in Pen E, I had to wait a really long time before starting. When it was finally time for me to start, I think I felt a bit stuck behind the rest of the people. My aim was to do the marathon in 4h 30 min, which is the end of pen D and the start of pen E. Since I started halfway down pen E, I had to weave through quite a number of people before I could find a space where people were running at my pace. That took me about 5km. I felt a little suffocated before that due to the increase in overall temperature from the body heat of many people around me.

I clocked a good timing of 6:10 min/km overall till about 15km and I stopped for my first intake of nutrition at 11.6km. Thereafter, I basically took in water/isotonic drinks whenever I felt like I needed to cool down or when I was tired. I think I got a little paranoid on that and took in too much, resulting in a bit of bloating on liquids, so I forced myself to skip some rest stops. In the end, I took in 3 gels at 21km, 30km and 37km because I felt that I needed the energy boost at those areas. I totally went off course from whatever I had planned before the race. I also didn’t stop running, except at the points when I was drinking/eating, and I always started running again once I was done (usually it’s an extra 20-30s for that km).

I’m a consistent sort of runner, so I felt that it helped a lot when I maintained my pace, rather than to walk then run faster. I hit a wall from about 25-35km, but I continued to persevere and jog, because in the end, jogging all the way will always still be faster than walking some bits and running some bits. The inertia to restart the running bit is also always very high.

Now, if you know the running route, you would have expected the big slope at 38km called Sheares bridge. But I assure you, it’s not as bad as it seems. You just need to take it one step at a time and not look at the overall. It’s rather gradual and by that point, your legs won’t feel the difference between a slope and flat road so it’s okay! I actually regained my speed on the slope.

With the finish line in sight, I still had it in me to sprint down about 50m! That was awesome. I didn’t stop right after and did a mini cool down jog, since the medal collection point was quite far down the line anyway. I would recommend you to do that so that your legs don’t suddenly collapse when you stop.

It was a good run, and a superb first marathon experience for me! I’ll definitely be going for more. And the key to surviving well is to TRAIN.

For a more detailed race report, read it on my blog at http://lynnoblast.blogspot.com. I’ll also be writing about how I trained in another post!