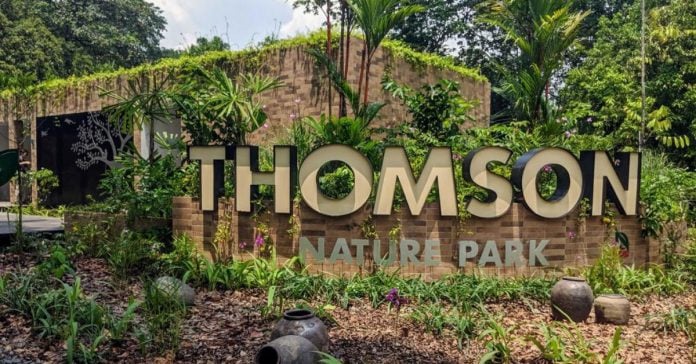 Thomson Nature Park is a key conservation site for the Raffles’ Banded Langur, a shy and elusive primate that is only found in Singapore. Through reforestation and enrichment plantings, their population size has increased to about 60 individuals today.

Apart from its rich wildlife, Thomson Nature Park has a unique cultural heritage as it is the site of a former Hainan Village. You can follow three specially curated walking trails and spot the remnants of kampung life that can still be found here!

Explore the five trails spanning 3.8 km around the former village’s road network. They have been specially curated to provide visitors with an insight into the ways of life during the kampung days as well as into the variety of floral and faunal species found in Thomson Nature Park. The Ruins and Figs Trail gives visitors a chance to experience the heritage highlights of the Hainan Village through carefully conserved ruins, while the Stream and Ferns Trail enables visitors to appreciate the freshwater habitat in Thomson Nature Park and observe the great diversity of ferns and aquatic animals present. Three other trails are Rambutan Trail, Langur Trail and Macaque Trail.

Planning a visit to the new Thomson Nature Park?

Check out the NParks video below on how to get there and what you can see! Look out for the critically endangered Raffles’ Banded Langur, as well as kampung remnants of the Hainan Village that was on this site.