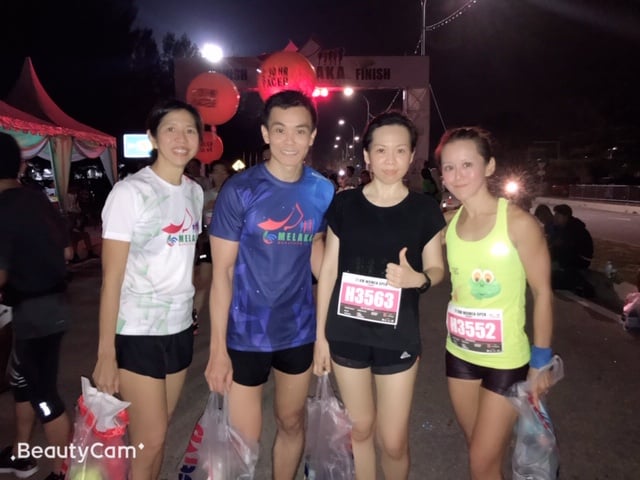 Melaka Marathon is held in the Heritage state of Malacca in Malaysia. In 2008, Malacca was listed as the UNESCO world heritage site for its long history and architectural buildings.

Introduced by one of the Tortoise runners, Ho Kah Leong (we commonly call him Ferrari, for the insane speed of running), he spotted the race and started to ask around for people to join. The lucky draw prizes and being the first time organisation, it really drew interest in many people. So happen, Ferrari’s wife is a Malacca resident too, Julie. So without hesitation, I decided to sign up.

The 21 km cost 90RM and 10km was 70 RM, all these amounted to about 53 SGD. It is really cheap considering that I am going to get 3 tee shirts, 2 medals and a chance to run 32 Km. The goodie bag had biscuits, sweets, active tape and some coupons for discounts.

Strong heritage history and culture, Malacca is easy to get to from Singapore. You can drive or take a coach from Golden Mile Complex.  I board the bus with another runner friend, Katherine Lim.  The journey was about 6 hours.  Kind of long but that was due to the customs.

After checking in to Estadia Hotel. We realise there were many Singaporeans in this race too. There were many of them in the hotel that we stayed. Katherine, quite a popular figure in the running scene, was greeted by many people along the way. We even got free durians from some friends around.

Ferrari and Julie has already picked our race pack the day before so we need not have to make our way down.  Doing two races, I got two bags which felt kind of funny.  After picking us up from the hotel, under Julie’s recommendation, we went to this special Chicken Rice ball shop, Yi Ji Bang Chicken rice.  It was near the hotel and also Halal.  The queue was long but we got our share of carbo loading finally.

Coming to Malacca will not be complete without going to Jonker walk.  So we went there and did some small shopping, I finally got my Peranakan Kebaya and also bought some local snacks for the people in the office and home.

Rock and roll starts at 3:30 Am for Half Marathoners.  I have to finish it before 7 am for the start of 10km.  More like a night race, I felt really sleepy to get to the start line.  So I had a lot of coffee and of course the usual Red Bull to perk myself up.

Ferrari and Julie picked us up from the hotel. And we set off, luckily we were not blocked by any road blocks for the race. We parked, we made our way to the event place. There were already some people there but not too crowded. Putting our baggage, I heard that the Full Marathon sign up was only 800 participants so it was not that crowded. We saw the Full Marathoners flag off and it was quite impressive with the fireworks along the run way. There was also a traditional dance to kick start the run.

About half an hour later, we flagged off, it was really not that crowded. To speak the truth, the race course is really enjoyable. Its not that super flat and the roads are well closed, starting around 3:30 in the morning will mean that we will beat the sunlight and heat. Surprisingly it was not that hot, humidity was also manageable. The water points along the way were well stocked and there was one point with banana, Isotonic and cold sponge. I think this is very good for the Full Marathoners. Along the way I saw Jaijendran, doing his FM. There were many other Singaporean runners whom I met.

The last part of the route brought the runners up a gentle bridge and after coming down, less than 1km, you are at the ending point. I came back around 5:30am, there was ample time to the next flag off for the 10km at 7am.  Though my timing was not ideal, I managed to come in 12 for overall women and 5th for my category.  Something which I thought I would not have managed since my injury.  Another Australian lady runner, Dani, came in 3rd and she was elated because it was like her first time cliching such a title and the fact that there were other Kenyan runners around making the competition tougher.

The best thing was both of us were going for the 10 km.  So we did a quick change, rest a bit at the end point with some red bull, Milo and Aik cheong kopi.  So we both went back to the start line.  To speak the truth, this was the first time I did a back to back.  Usually it is just a full marathon or just a 21km.  But this time I thought, since I came all the way here, I must make my trip worth.  Happy that I made this decision, as I really still have some energy for the 2 leg.

The 10Km route is part of the 21km, it was straight and only last with the bridge.  The rest was pretty flat.  Seems like after a rest, I was still able to tackle the 10 km.  Dani overtook me fast , although in between she seemed to slow down, she started to jet off after 1 km or so.  To speak the truth, the 10km was not really that crowded.  The water points were also well stocked.  The ending part was wide, so there was not bottleneck or Jamming up. I would say for the first time organising, the race committee did really well.  The road closure was well organised.  Water points and baggage drop were well managed.  Although it got a little chaotic at the winner’s pen but things turned out well and they did not bring in cash to give out, which is kinda logical for safety reasons.  Finishers gets the tee shirt ( HM and FM only), Medal, some buns and a can of Milk powder ( however, it was stated that it was for senior 60 years old and above).  While for ten k , there is only the medals.

The ending area is a big park, so there was ample space for all to relax and also the carpark was huge to allow participants to be able to drive to the location.

A little improvement I felt was for the Finishing was that they should segregate the different categories for running in.  As it gets a little messy there.  You also had to walk quite in just to get the finishing entitlements.  Since it was not that crowded , I think the whole process was pretty smooth running.

I would come back next year for more R&R and good food!