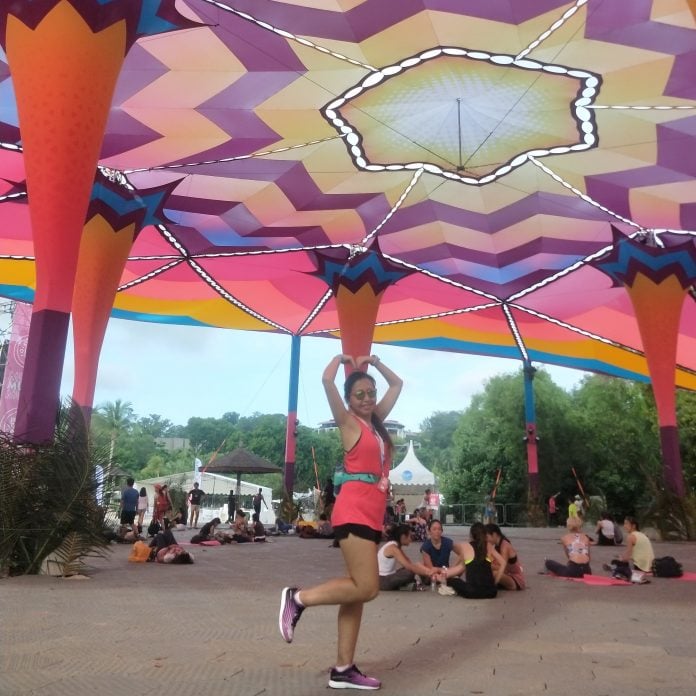 It was an eventful weekend, or I could say it’s an eventful year for me. Or would it actually be a life full of events for me? 😆 Eventful life doesn’t really make sense unless it’s doing things that you enjoyed doing and I can say I really do enjoy going to these events 😁

As I wasn’t feeling well, I could have no show for AIA Glow Festival but I was the one who jio-ed both Eleanor and Yi Jing to register for the Charity 5km run 😂 So roll on the floor and cry I also have to turn up and complete it 😂 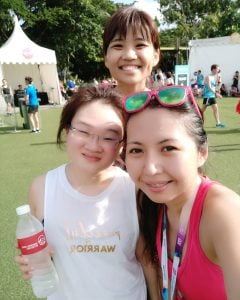 Thank you Team PinkApple and JustRunLah! As both offered me with a Full Day Pass to AIA Glow Festival. I really am not a Yoga person and I don’t even do any sort of stretching before or after my own runs 😂 Yoga to me is graceful and elegant. It’s for the mind, soul and body. I think Yoga will help me with my pole tricks as it will definitely help me in flexibility and I want to do splits since like millions of years ago but I just feel like I have brittle and rigid bones and I’ll break my legs if I try to stretch even just that tiny little bit more 😂

The all-day pass for the AIA Glow Festival cost over a hundred dollars after GST and it was sold out! Wow! But I guess for the yogis it’s worth the money as it allows the registrants to participate in everything they offered at the festival including unlimited access to yoga classes, the 5k fun run as well as the music party! Also comes with a very beautiful bandana and water bottle and a $10 credits to buy food available in their marketplace 😍

One thing good was that I was able to purchase the pass separately, for example, if don’t want to get the All-Day pass, I can just buy tickets for the Music Pass, Yoga Pass etc separately. For the Fun Run, $10 will be donated to charity for every ticket sold. ❤ And eventually, they opened up a certain number of free slots to register for the 5km Fun Run, and AIA will donate $10 to the AIA Centennial Fund for every runner participating, capping at a limit to 10,000 runners! Best was that even the free registration includes the bandanna and finisher medal 😍

Was at first lazy to go collect but sibeh heng we collected our Festival Kit which consists of a bandanna and a wrist tag a day before that was needed for entry earlier and not on event day and I think I’m a genius 😆 Because when Eleanor, Yi Jing and I arrived at the race village around 3.30pm at Palawan Beach Sentosa, we saw a super long queue formed just outside of the entrance to the gate to collect the Festival Kit. The area was super crowded 😨 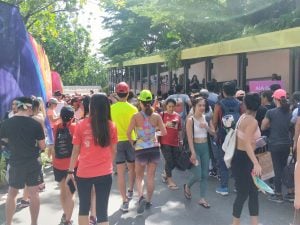 We didn’t bring any bags to deposit along with us as it was stated on the Festival Guide that baggage deposits were limited. Not wanting to risk running with bags, we travelled light with hydration belts and pouches. There wasn’t any queue for baggage deposit though. We went directly to wait for the start pen to open. Flag off for the 5km fun run was at 4pm. So we were being baked under the Sun while waiting as there’s limited tentage around. Hurhurhur.. I want to have fair skin like Snow White de leh 😭 There’s a warm-up being led but it was too hot and I don’t feel like moving at all and maybe I’m the only person around still like a statue 😂 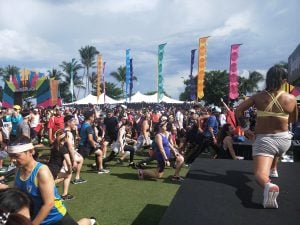 It was the same route as My Melody Run two weeks ago and the distance was also short. It was only 4.2km when I completed the run. I think the route in Sentosa is standardized already so whatever 5km race held there was just that same 4 point something km. So any fun run there I think can also expect a shortage in distance in future 😆 There were 2 hydration points along the route, which I felt was pretty good enough.

As some passageways were closed to visitors/tourists for the fun run, I saw that there were some arguments/dissatisfaction from them with the road marshals 😢

After the run, I collected the finisher medal and a bottle of cold water. It’s a super nice and unique medal as the front side is plastic material (Damn, whatever material is that.. And I studied Material Science while I was in polytechnic 😂) The heart can also spin ❤ And I really love the words “RAN WITH MY HEART” ❤ 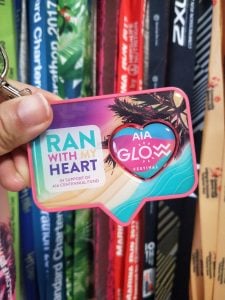 Explored the Festival village for a while and saw a water cooler! ❤ Nice! 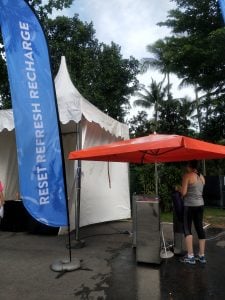 Didn’t wait for the music festival, as I still have National Vertical Marathon the next day. I think that the music festival was the main highlight of the event as it’s the most expensive ticket amongst the different types of tickets if purchased separately, but from what I can see that it’s really a set up well done and it would be great. 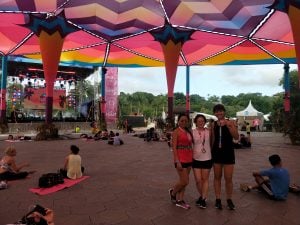 While we were leaving, I saw super long queue everywhere at the baggage collection, and even for food at the Marketplace was a long queue. Those food were like Instagrammable food, looks healthy and yummy 😍 I was relieved that I didn’t use the baggage deposit and glad that I’m not hungry 😆 Sentosa monorail was also super long queue, so we decided to walk out of Sentosa ❤ 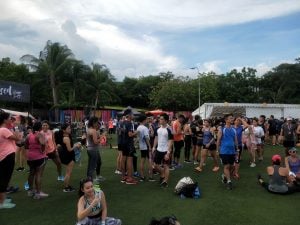