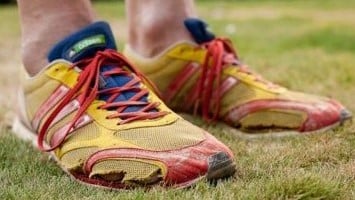 Singapore’s trail runners don’t seem to figure much, if at all, on the radar of the city-state’s planners. Our fast growing community has to make do with a limited and diminishing set of options. I am vaguely hopeful that the need for more, and more continuous unpaved options may be picked up by that radar, but in the short term, the only substantial change can come from us runners looking at our environment in a new way. As I’ve argued in an earlier post, great trail possibilities might stare us in the face, right next to the unforgiving concrete our complaining feet are pounding.

This post is about a version of that cleansing-our-doors-of-perception so as to see the obvious: I recently went out to MacRitchie with the objective to see how many trail kilometers one can actually do without doing the same again and again. I came up with two loops, one of which I’ll describe here. The full write up with both options is available on my personal blog.

Start at the Mushroom cafe and head out past the paddle lodge, onto the regular MacRitchie trail. Include the first two entry/exit trails going off to the right as out-and backs. Then continue toward the turn off into Windsor Nature park . During the first traverse of this section, at junctions, always take a left until you can see the toilet block ahead of you. Past the toilet block ignore the park connector and make for the grassy slope. I have marked this next bit of trail red as I am pretty sure hardly anyone knows about this perimeter option. It’s all trail, mostly lining the gardens of upmarket landed properties on one side and the jungle on the other. When the park connector ends, keep following the grassy slope, first straight East, then straight South before turning East again and hitting the dead end of Gardenia Rd. Look for the rickety metal bridge across the ditch into the forest again. You’ll see a trail to the left which makes for a 1.2k out and back to where the second entry/exit trail emerges from the forest. After this out and back, head into the forest on the faint and wild 3rd of MacRitchie’s Eastern entry/exit trails and hit the main trail  after 150m, about 1.35k from the turn-off to Windsor park. Doing this bit of main trail twice is unavoidable if you want to explore this 5k loop.

At the turn-off go into Windsor Nature park once more, now take right turns at all junctions until you hit the park connector, turn left toward the boardwalk you emerged from first time round. On the way back on the route you came in on: include the Hanguana trail – a little loop just after the bridge to the toilet block.

Back in MacRitchie, it is quite straight forward all the way to the Petaling hut via the tree top walk (with the exception of including the concrete footpath on the right just before the ranger station to the Bukit Kallang service reservoir as an out and back). Obviously the suspension bridge is non-running territory but the stairs and board walks after should be no problem outside weekends. From the Petaling hut do the sims track to the ranger station as an out and back and then continue toward Riffle Range Rd (taking a right at a t-crossing – following Bukit Timah signage).

When you hit the road (which is a broad trail here) an “entry only for authorized personnel” forbids you to add an out and back on Riffle range Rd to the East and one along the rapid water flow channel to Upper Peirce reservoir to the North – good for a combined total of 3.7k of trail (both shown on the map so you know what I am referring to). Signage along these tracks suggest that they were accessible in the past, and neither conservation nor security arguments make for plausible reasons to close these trails. Sigh…..

But you can take Riffle range Rd to the West as an out and back, return to the t-crossing and continue to the Jelutong viewing tower – which, as I have argued before and before you should climb: free altitude meters and in this case a stellar view. From the tower make the out and back detour to a side entrance of the Singapore Island Country Club, climb the viewing tower once more, just for the heck of it, and then take the regular around-the-reservoir trail back to the Mushroom cafe. Throw in the two entry/exit trails from the Lornie trail for good measure.

The Southern section of MacRitchie offers the possibility of another loop, using the board walks hugging the reservoir and trails you’ve ruin in the above described circuit, but now to be run in the opposite direction (for the description of that 11k possibility, go here). May I stress that yes, it’s indeed a changed world when you turn your head the other way! Which also means that the various mentions of out-and-back in the above description shouldn’t scare you off. Give them a try.

Three highlights and one bummer summarize my experience of this exploration. Let’s start with the bummer: everyone complaining about available trails being closed off for no good reason, unfortunately they are right.

But the highlights outweigh the negative:

You have made it through a long bit of text, by way of making it up I offer this fabulous Belgian jazz singer as some auditory icing on the cake: