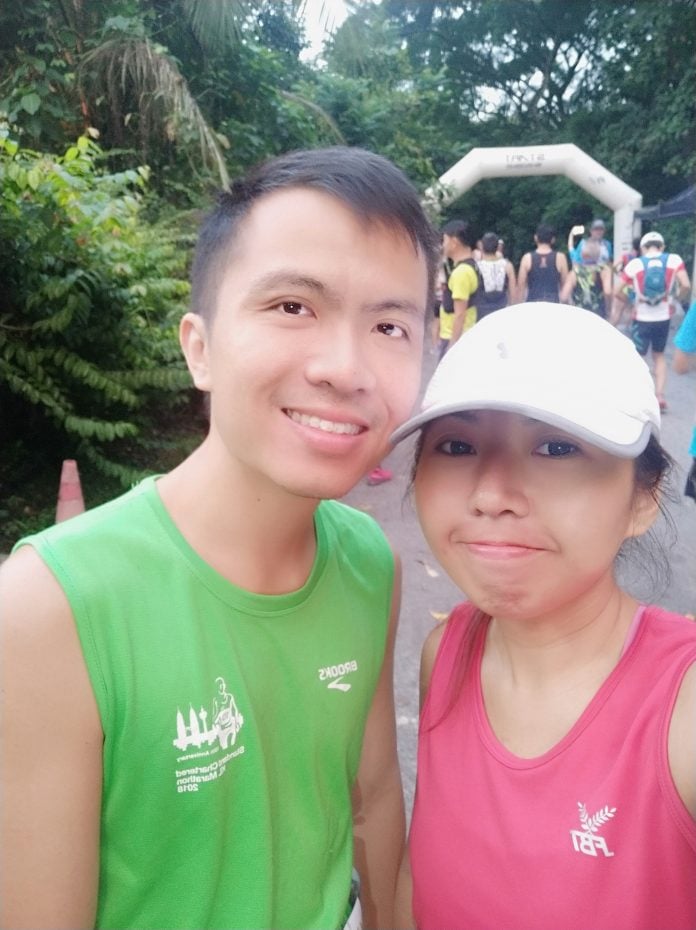 It was the first edition of Forest Force 50. And the race site was at Dairy Farm with the scenery much different than the usual Gardens by the Bay, F1 Pit Building or the high rise buildings. This time, the highlights of the route were just simply nature and the greenery 😍 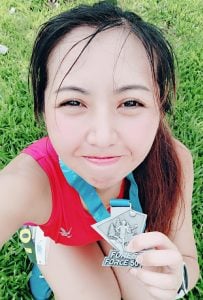 Willis and I participated in the 15km category and there were 25km and 50km categories as well. Flag off was at MOE dairy farm located near to Hill View Station of Downtown Line at 7.15am for the 15km, 5 mins earlier for the 25km and 50km runners 15 mins earlier. But we would not be possible to reach on time by public transport so we took Grab to the race site.

Though dark clouds soared above us and the sky looked scarily dark and I did hear some thunder as well but we were blessed that it didn’t rain. I love to see trail runners all dressed and geared up in their hydration vest and armed with trekking poles, looking all colourful with all the accessories you could think of such as caps/visors, arm slevees/calves sleeves, compression top and bottom and scarfs and all geared up like serious and professional runners. They looked prepared. Unlike me, always in the usual shorts and singlets and a arm band for phone. It was a BYOB race but I didn’t bring any hydration because I know Willis have hydration belt and I can just rely on him and look for him when I’m thirsty 😆 Anyway, I’m pretty amazed with technology nowadays. Thank you to Forest Force 50 organisers, though distance short, I have forgiven them as to a certain point it’s still a awesome race ❤ Its the first time I came across something I had never experience in my hundreds of races that I participated in before. While waiting to start, I didn’t see any timing mat but theres a chip behind out bib so we should have timing available for the race. I told Willis no timing mat and he said now got other technology nowadays which I was quite skeptical about. I even jokingly said maybe got infrared scan or something which we can’t see. But still it may be more than what I thought, I don’t know what sorcery or magic(ok, maybe it’s science 😆) but it’s really super impressive, I think it’s even with GPS I think 😨

You may check your results here.

Once flagged off, it’s up slopes already. It was quite funny as I heard all the awkward and forceful laughs by the runners 😂 Willis and I ran together and he took care of me, warned me of slippery and uneven ground and walk with me when I was tired of running the up slopes. It’s not fair that I run more, I had clocked higher mileage and a higher frequency in running than him but running seems much more easy peasy for him. At first I thought yeah, I would slow down and wait for him to catch up but LMAO, it’s the other way 😂 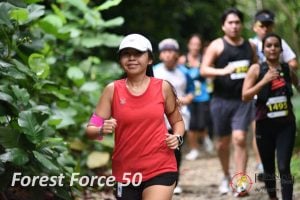 I love the greenery but not the up slopes 😆 But up slopes are good trainings. There’s different type of terrain for this race such as tarmac, grasslands, dirt trails and also some rocky parts. I remembered telling Willis it’s so well done as direction signs were clearly displayed for the 15km runners but I might have praised them too early 😢 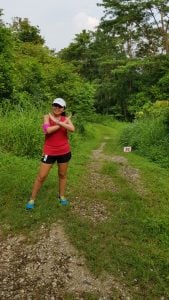 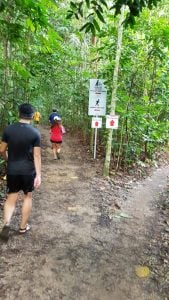 I sompa I studied the map just to agak agak know where I’m running to at least but I have not been to Zheng Hua Park before so I’m not familiar with the area. And we came to a point where 5 or 6 volunteers/marshals stand ahead in a line like a human wall very firmly on the path, blocking what’s ahead and they told us to u-turn. It dosent make sense for us to question them at all. I could have if I have downloaded the GPX file of the route but I’ve not yet explored the function of my sports watch 😂 All runners before us made the u-turn so we u turned as well. At about 9km, a runner run towards us in opposite direction and said something like running the wrong route and I thought he was sharing his experience and I felt sorry for him. Then another runner make a turn and we accidentally followed him and he stopped and told us the whole story that road marshals have directed runners wrongly and everyone had ran a shorter distance and he’s running additional distance on his own. Turns out I think that the majority of the 15km runners ran the wrong route and only completed 9.5km 😲 Sian to the maximum right?

The runners looked so angry as if they could kill somebody. Just kidding, runners are generally the most nicest people in my opinion lah. For no reasons I also have crazy logic that people who loves to drink ice milo were nice people as well 😆 Willis and I were rather calm, no questions asked nor did we go to the organisers to bang table and shout shout demanding for an explanation. We just approached a group of runners to gather some information and felt relief that it’s not we blur sotong nor the only ones with shorter distance.

I happily go to the Milo Van and drink my cold cold Milo ❤ Good that they have Milo Van, it’s my second favourite drink in Podium after Milk Tea with Pearls so I think I still consider this as a awesome event 😅 Drink till I shiok already then Willis and I walked a little further down to collect the medal. 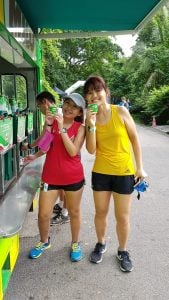 The support was awesome with apples and bananas for runners and even free massage services for runners! And I saw ice popsicles! 😍 It’s available in different flavours and I’m seriously happy to see ice popsicles as well! 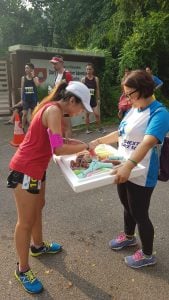 While I was happily eating the ice popsicle, I told Willis that the medal we took machiam not meaningful and have no value to us at all. I only ran 9.5km and I will be constantly reminded that I didn’t complete the full distance. Just like that Yolo run medal I took a few years back which kept haunting me that I took a 10km medal but the race was cut short to only 7km 😕

We felt that we should run and complete another 5.5km on our own to make the medal worth keeping and the trip not wasted. Willis suggested that we could run to Bukit Batok Nature Park since I have not been there before and at the same time I could do my virtual race challenge by JustMove! Asia 😍

Bukit Batok Nature Park used to be an abandoned quarry and now its a small park but that offers a stunning view of the quarry! 😍 I was there for quite a while to admire the view or simply call it as nature appreciating 😆

It’s a peaceful and beautiful park though its quite slopey 😆 There’s a memorial plaque situated within the park to pay tribute to the soldiers and victims that sacrificed during World War II. 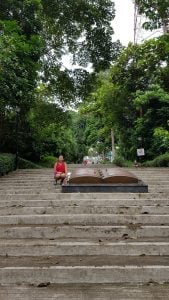 Turns out that the distance to Bukit Timah Nature and back was perfectly fine and we hit our 15km target! 💪 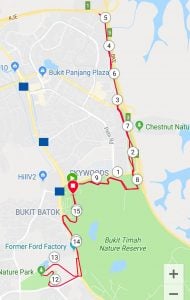 While we were on our way back from Bukit Batok Nature Park, we passed by a restaurant which is so kind and sweet to offer free ice cold water! I mean who else will pass by there other walkers, cyclists and runners! ❤ 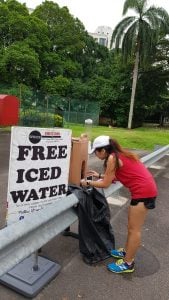 Though I’m not really affected by the shortage of distance of the race since I completed the rest of the short changing distance, I felt that it would leave a bad impression of Singapore races to the foreigners. I saw many Caucasians in this trail race and I heard that some of them flew in to Singapore all the way just for the race! 😢

Although they sort of messed up for the 15km, but I didn’t hear much complains from the 25km and 50km runners. At least the organizer admitted their mistake and apologize through Facebook which I felt is a sincere apology and they assured us that they would make amends to the 15km runners through email. So let’s just be patient and see! ❤ 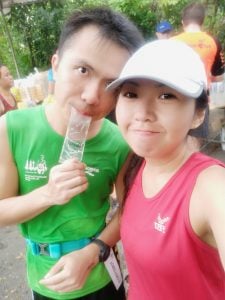