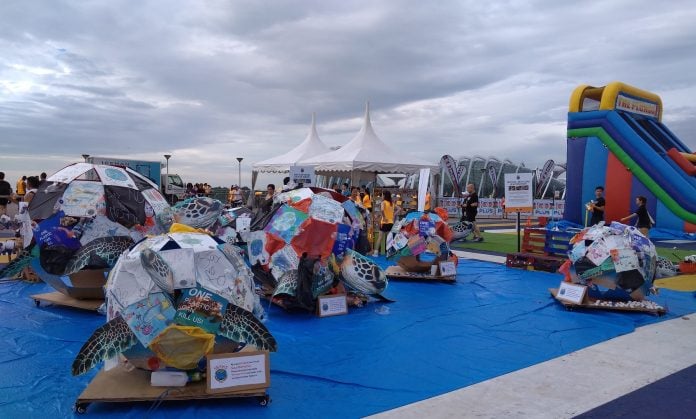 The annual Income Eco Run champions environmental conservation and aims to encourage everyone to play their part in support the cause for zero waste. Held on 28th April at the F1 Pit, it includes the following categories: 21.1 km, 10 km, zero waste 5 km and Kids Dash. Last year I participated in the HM category and having just run the 2XU HM 3 weeks ago, I decided to opt instead for the 10 km category for this year’s edition.

Collection of race pack was at the F1 Pit 2 weeks earlier and just like last year, the retailers at the Farmers’ Market offer runners a wide variety of healthy snacks and lifestyle products. Income is really one of the few organizers offering runners a good range of pre-race activities.

The weather was very cooling on race day morning as it had been raining on Saturday. The 10 km runners were scheduled to flag off at 6.30 am. However, I chose to start later and forgo taking Grab or shuttle service to the race venue and instead took the train. I arrived at around 7 a.m and commenced my run after some warm up.

There were only a handful of runners running along with me as the majority were already way ahead. It was ‘surreal’ as we literally had the whole Nicoll Highway to ourselves. But I had just run here 3 weeks ago during the 2XU race and is expected to cycle along this same road 2 weeks later during the OCBC Cycle.

I managed to catch up with some of the front runners at Tanjong Rhu and Gardens By The Bay. These were familiar routes and were uneventful in the early Sunday morning. I completed the race within my usual timing. Specific lanes were arranged for each size of the finisher shirt so that the collection process was faster.

Hydration stations were sufficient, providing runners with choices of 100 Plus and water. There were also many volunteers along the route and some provided directions at critical junctions. In addition, I noticed some volunteers were on bicycles. I believe they were helping to cover the race routes and ensure anyone needing first aid or medical attention was promptly attended.

At the race village, there were many post-race activities for the runners to participate. There were games which involved (or constructed) with recycled materials. There were also displays or artwork which encourage us to ‘Save The Earth’ by reducing and recycling. 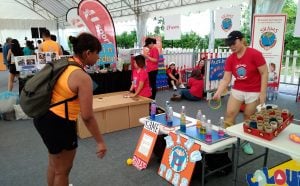 Starbalm provided free massage and a ‘bouncy slide’ was set up to keep the kids entertained. But I guess one of the main attraction was getting the free ice cream after you ‘pledge’ a recycling option at the booth of Shaws Preschool Singapore. 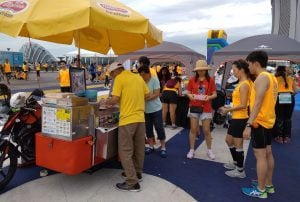 Volunteers were also seen going around to persuade the runners to return their safety pins and the red clips from the shoe tags for recycling purposes.

I feel that Income Eco Run is one of the very few local events which provide participants with ‘total’ experience, right from the day where we collect the race packs to the race itself and post race.  Preliminary race results were also made available within the same day, which I feel is pretty efficient.

The only drawback is the design of the finisher shirt for the HM runners. Personally, I don’t appreciate the ‘cartoon’ design at the front and the faded finisher wordings at the back. I think the 2017 edition was much better.

In all, I feel this is a good race and I congratulate the organizers for a job well done!

This year’s The Performance Series (TPS) consists of 3 road races and 2 virtual challenges. Together, they make up a collectable Finisher Medals set. I probably will not be able to achieve it as I am seriously not a fan of virtual runs unless it is for a special occasion, such as the Raffles 200 Bicentennial Virtual Run.

Held at the Event Lawn beside Safra Punggol on 5th May, this is the first of the road race. It is called ‘Emerge’ and have 4 categories: 21 km, 10 km competitive and non-competitive and 5 km fun run. I was participating in the 10 km category.

There were thunders in the early morning, but fortunately, that did not translate to rain. I took LRT and alighted at Sam Kee Station, which was just opposite the race site. The flag off was at 7.30 am and I arrived slightly later.

The route took us along Punggol Waterway to Coney Island through the East Entrance. I last visited this place in March during my North East Cycling Expedition. But my last run in here was during the Real Run in 2017. So I was quite happy to have the opportunity to revisit this route through TPS.

The weather was hot and runners helped themselves to the H20 provided by the hydration stations at every 2 km. I was perspiring profusely and on hindsight, I surmised bringing along a towel would have helped to clear away the sweat and enable a better run. I did that for half marathons and had thought this was not necessary for a shorter 10 km run. Well, I learned it really is a matter of what time the race was conducted and how comfortable I want myself to be!

I completed the race within my usual timing. It was already near to 9 am and it appeared many runners had already taken their entitlements and left. Perhaps it was because the sun started to beat mercilessly into the Event Lawn and also, there wasn’t much post-race activity. There were not many retailer booths, with notably just Garmin which was the title sponsor. 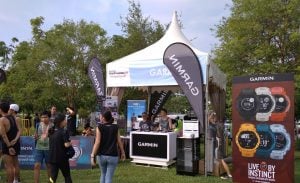 I left shortly after the prize presentation to the podium winners.