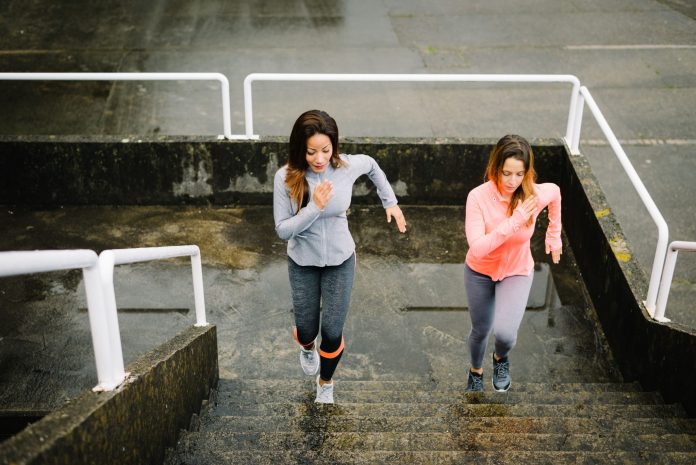 Cities offer many amenities, but wide-open, pollution-free spaces for running are rarely one of them. You can still have a great run in an urban environment, but it takes extra planning and precautions to make your experience safe and enjoyable. From running at off-peak times to sharing the sidewalks, here are 10 tips to follow during your urban runs:

Listen to the world around you.

While earbuds are great for blocking out ambient noise, they’re terrible for listening to the world around you because the rubber tips seal up the ear canal. Staying aware of your environment is paramount for running safely in urban environments, so keep the volume down low or leave your headphones at home entirely. If you’re in the market for a new pair of headphones, look for a model that rests on top of the ear rather than inserting into the canal, as this design will still let you hear ambient noise.

Run on the best side of the road.

The conventional wisdom is that you should run against traffic so you’re facing oncoming cars, which improves both your visibility as well as drivers’. However, running against traffic isn’t always the safest route, especially if only one side of the street has a trail or sidewalk. Use common sense and choose the side of the street that gives you enough room to run and good visibility. Try not to run right next to walls or other areas so you have space to dive out of the way in a worst-case scenario.

Find a running buddy or two.

As the saying goes, there’s safety in numbers—not to mention that having a running buddy can keep you accountable and make the time pass quicker. There are many national running clubs that can connect you with compatible runners. Whether you run solo or with others, vary your route often to make it harder to follow you, don’t share too much about where you run on public social media sites and always tell someone where you’re going.

Carry only the essentials.

Obviously, you’ll need to bring your phone and your keys with you. You should also bring identification such as your driver’s license, cash for emergencies and a transportation card (if applicable). If you’re running at night, you’ll also want to bring a flashlight to illuminate the way. You’ll probably need an armband or small fanny pack to fit everything. Some running shorts have small pockets, but they’re usually only big enough to carry a few bills, not an entire phone.

Whether you run at day or night, you need to make yourself visible to drivers and other pedestrians. Wear brightly colored leggings, shorts, tops and compression socks to make yourself stand out from the pavement. If you run at night, you’ll also want to invest in a vest or other reflective clothing that will show up well against headlights.

Run at the right times.

Alas, pollution is a problem in many cities and it can actually make it tough to breathe as you run. Try to avoid heavily polluted areas altogether, and don’t run during rush hour either. Not only is traffic much worse then, but the exhaust from all the cars can also seriously mess with your lungs. Instead, run early in the morning or later at night once traffic has calmed down.

Just because you live in a city doesn’t mean that crowded sidewalks are your only option. Do some research to see if there are any urban parks or running trails near you. Depending on the park or trail, you might be able to avoid cars altogether, as well as pesky stop lights that break up your running momentum. Even if you’re not within walking distance, driving out to a trail for a long weekend run is often worth it.

Plot your route ahead of time.

Speaking of pesky stop lights, planning out your route ahead of time will cut down on frustration and possible hazards. Double check that no construction is blocking your route, and see if there are runarounds (pun intended) for busy intersections and other tricky crossings. If you use a running app, it may offer the capability to plan out your route digitally as well.

Many runners try to jog a certain distance in a set amount of time or to only take so many breaks. However, it’s really hard to maintain a pace in a constantly changing urban environment, so if you’re running in the city, don’t fret too much about setting a personal record. It’s much better to slow down and use caution when crossing the street than to spring across an intersection because you’re trying to beat your time.

Sidewalks and trails are public spaces, and following the proper etiquette will ensure that everyone can share the road with a minimum of fuss. Just like driving, you should generally run to the right of the trail, but pass on the left. If you’re passing some oblivious pedestrians, a simple “excuse me” or “on your left” will often give them a nudge to move to the side. If you run with other people, try to keep it single file if you’re running a crowded track, and definitely use single file when you pass others.

Running safely in an urban environment requires some foresight, but with the proper planning you can enjoy it just as much as running in the country. Follow these 10 tips to keep yourself safe whenever you run in a city, and don’t forget to use your common sense and stay aware of your environment at all times.