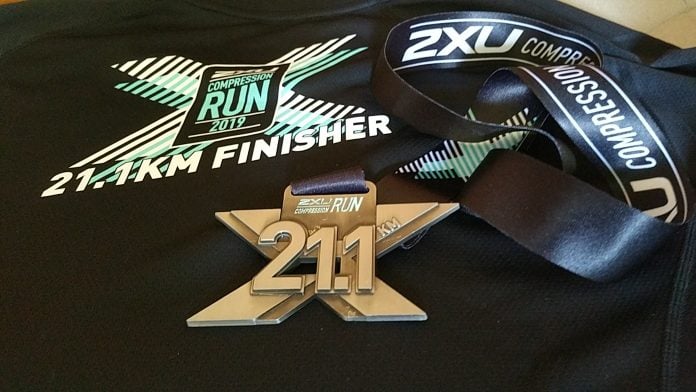 A week after Terry Fox Run 10 km, I was going for my first signed up race of the year, the half marathon with 2XU Compression Run.  I quite enjoyed the Terry Fox Run though it started late and ended with a bit of the morning sun, maintaining the heat of March on all runners.  The heat and humidity followed onto April’s first weekend too !

When I collected the race pack for 2XU, I was struck by two things.  One was the bareness of the race pack.  So I guessed it was going to be a lower key event this year vs other years.  When I joined the queue for the race pack, I had my NRIC scanned first and then given a slip of paper with some numbers (bib number I guessed).  There was very few people in the queue but I waited a few seconds at this process but the one behind me would have to wait for me to finish too.  At the proper counter, I asked about the size of the tee shirt and handed over my IC again for them to verify.  I thought that the first step was probably going to cause some bottleneck if the queue was really full, though the original idea might have been to divide up the distribution of ‘work’ and thus left the proper counter to just use the paper to gather the pack items.  Since the items were few, I thought having it done at one counter would be efficient.  Anyway, as there was just not many folks at the time, I didn’t spend more than 5 minutes so it was still acceptable. 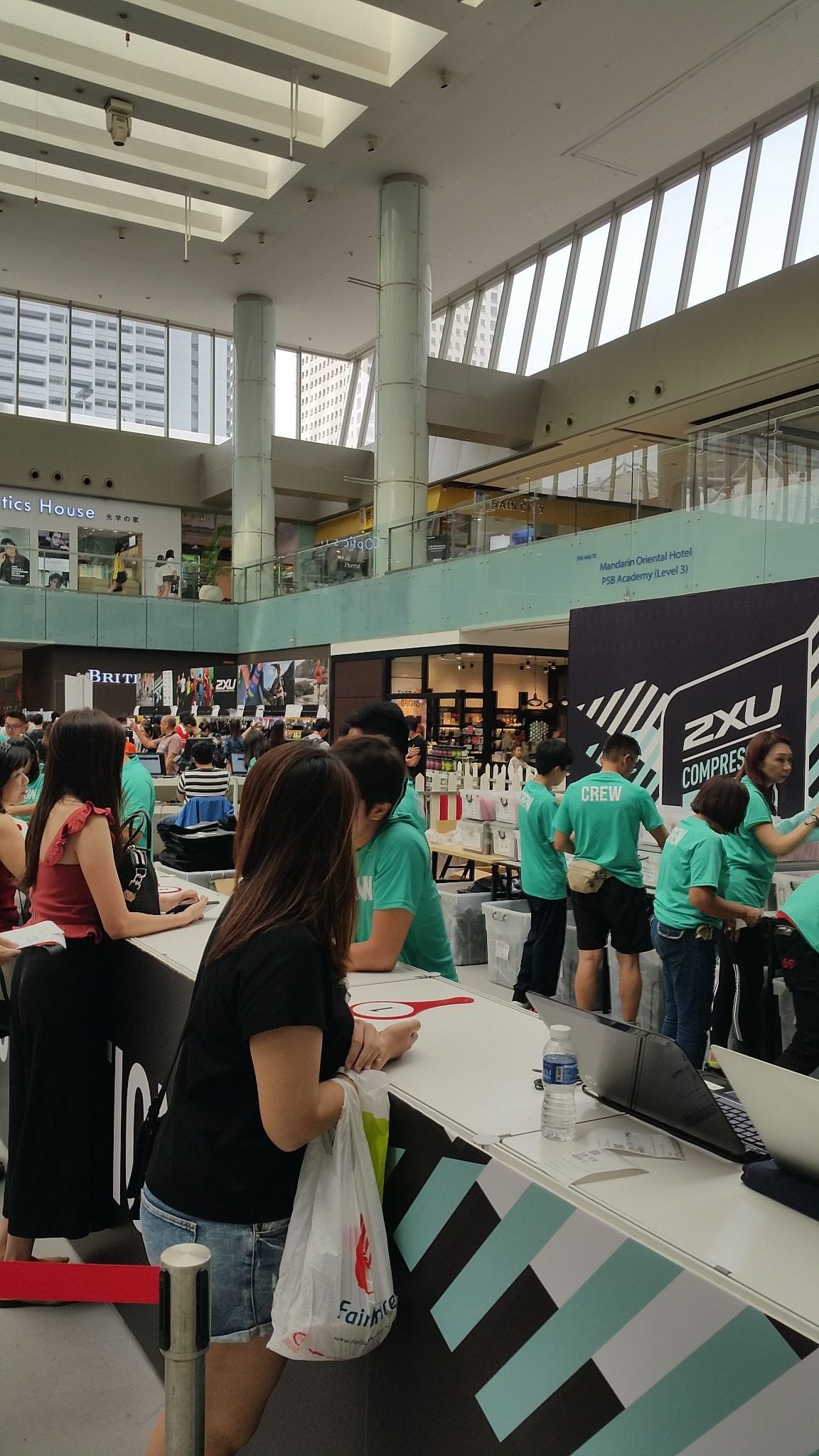 There was a board for folks to indicate their tee shirt size for exchange if necessary.  This was pretty convenient and efficient.

On night before race day, I planned to sleep early at about 10 pm and then woke up at 2.45 am to prep before driving off to the venue.  As always, I set my phone alarm, though on almost every event in the past, I woke up by my internal clock earlier, so that I didn’t have to alarm the whole household with the phone’s blare of music.  I found myself still awake at 11 pm, and then dozed off.  Woke up every hour till 1.45 am.  Feeling rather frustrated, I forced myself to get some real sleep since I still had an hour more.  And then in the middle of a dream stage, I found my internal clock chiming, wake up, wake up.  Bang ! I woke up with a start and found it was 3.30 am and then I think I did a real race.

I shortened everything which I normally do in half an hour to just 8 minutes or so.  I even skipped my ritual of eating my two slices of bread with peanut butter and my race cup of coffee.  I was at least 35 minutes away from the venue since I was in the north west and some roads might be blocked.

No hope to be in wave 1 !  I managed to park at Marina Square Mall and then walked a few hundred metres to the F1 Pit Building.  It was crowded and I joined the human jam.  And found myself in wave 4.

So I made it but each wave was at least 7 minutes apart based on my estimate.  I started off at 5.02 am according to my watch.  Wave 1 would have started at 4.30 am.  The flag off was also a fairly quiet affair.  No music and the DJ just interacted with a few participants at the front.  The reason given was that there were residential estates nearby and we didn’t want to disturb the peace.  Good, I also had some quiet peace before we were flagged off.

For most parts of the route, it was still in dark shadows of the early dawn light.  I had skipped my toilet break as I was late and saw the long queues.  Before two km was up, I knew I needed to relieve my bladder.  As I didn’t have a PB in mind for this race, I did detour to get that cleared at the appropriate place.   Then I just focused on running, and tried to keep at consistent pace.  I was wearing the UA Hovr Sonic too, which I found comfortable but not exactly what I would take as my sprint shoes.  Of course, readers should take my comments to be just personal and relative to myself only.  I’m not a fast runner and still a very amateurish one at a veteran’s age (5 years of running with a lot of breaks).  Whatever I do for running is based only on my own experimentation.  My sprint is not your sprint pace and my fast is not your fast.

Anyway, I felt fairly relaxed and started to check in each km signage.  They were fairly accurate, my Garmin beeped a hundred metres or thereabouts ahead of each signage for practically every one that I noticed.  I did worry about not following my food intake ritual initially, so I downed one gel at the beginning in place of my ‘breakfast’, and then another one at about 3 km.  After that, it was 11 km and 16 km.  I stopped at almost every hydration point and every single one was just jammed with runners.  There were bottlenecks at narrower paths that we crossed.  But everyone just slowed down and it wasn’t bad enough to cause stopping of footsteps.  The first two tunnels we had to go through were dark but well equipped runners shone their torches (phones) and helped improve visibility.  The first one was almost pitch dark and it was still quite amazing nobody tripped over something.  Somehow the usual lights were not functioning.

As it was a rather subdued run (looping here and there, narrow paths, across grass patches), there wasn’t much scenery to look out for.  But yes, there were otter signboards but no otters in sight.  But there was a huge monitor lizard which attracted a couple of runners to take photos.  I saw such lizards almost every week near my running track but this one was pretty huge.  That was probably the most amazing sight for this run.  Someone did crash into one of those orange cones but picked himself up.  A few runners were stretching their legs near the 19 km point.   Luckily for me, I didn’t feel any tightness yet and continued to pick up pace in the last 3 km.

I saw the finishing point and saw a few runners put up their hands in victory.  I followed them just for fun though I didn’t see any cameraman in sight.   I did get a surprise later when I checked Garmin and found it recorded my half marathon as a PB (2:37:01).  I was more surprised that I wasn’t as tired after this race.  Perhaps there was something good in the short daily runs I did since beginning of the year.  So day 97 of the year passed and my running streak continued.  The PB was secondary.  Still, I’m not too sure if could finish my own ultra challenge that would be coming in less than 2 weeks’ time.  I hope I could finish that challenge and help raise some funds to fight against cancer for all cancer patients.  Till then.  Run Happy, Run Safe.