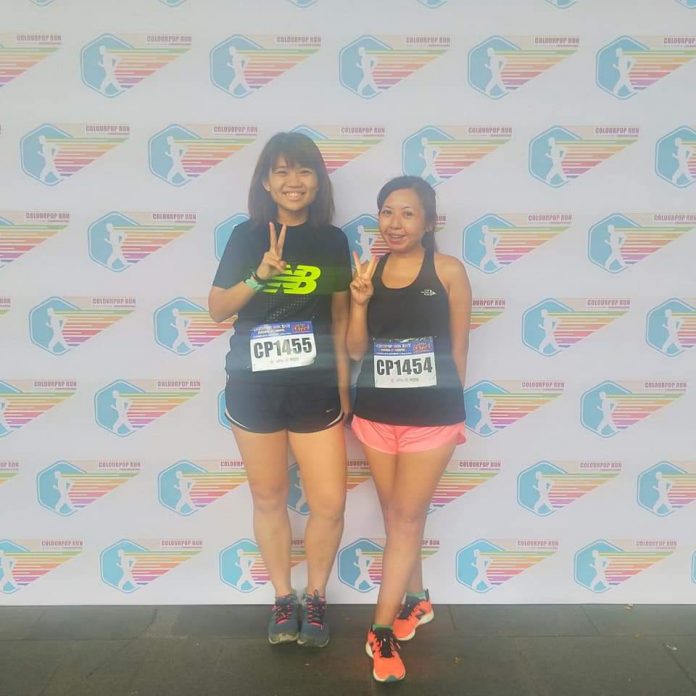 It’s sometimes just nice when you found out about about a race, registration was closed just the day before 😓 Luckily, registration reopened 😍 When Eleanor and I went directly to Woodlands Community Club to register,the run was just the next day 😁 Though even when registration wasn’t close yet, there’s no online registration available as I know of 😢 Not much information is available online as well other than the poster below, didn’t know if there would be any baggage deposit or what’s the route but I expect it to be well organised as it involves the community club and it would be fun as there’s stage performance, a carnival and National Step Challenge Roadshow that may draw a huge crowd. 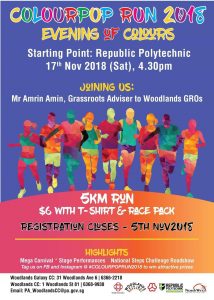 It’s a run I wanted to run because the start point was at Republic Polytechnic. A memorable place which I used to dread to go in the past. I took my diploma there and I almost couldn’t graduate. During my first-year school term break, I took up a part-time job at KBox as a receptionist to pass time and loved the job damn much till I converted full time. Many times after work my ex-colleagues and I would stay back to sing and drink. Sibeh enjoying till can’t resist working there! 😆 Work starts at 6pm and ends at 2am. By the time I’m home, I only have a few hours of sleep before school at 8am. Many times I was absent from school that’s why it took me 5 awful long years than the normal 3 years to get my diploma. I don’t know how is it now, but attendance during my time plays a great deal to grades. My GPA almost got me a “Thank you for your participation” towards the end of the 5 years. Luckily, I graduated with a GPA of 2.02 😆 This is already my 2nd “Luckily” I’ve used, I’m lucky. Blessed! 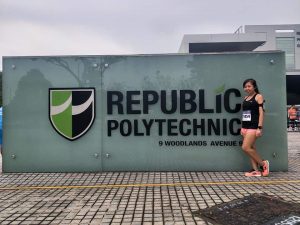 The run was organised by Republic Polytechnic, collaborating with People’s Association and Woodlands Community Club. Registration fee was only $6 which cost even less than a cup of Starbucks, upon paying for the registration fee, we collected the event tee-shirt(blue/green/orange colour to choose from) and a matching colour running headband with the tee-shirt colour you chose with a ticket which shows the running route, according to it, it’s just a 4.5km route and not 5km. 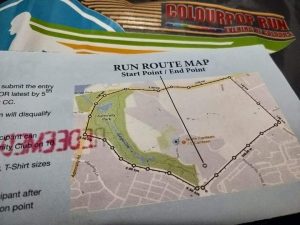 No matter what, it’s cheap cheap, I like 😆 It’s a fun run, and I find that usually fun run distance would be shorter than the actual distance stated. 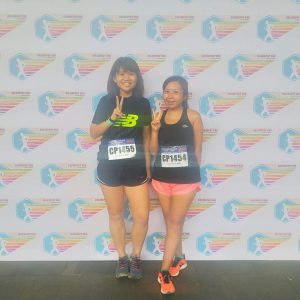 On event day 17 November 2018, Eleanor and I reached Republic Polytechnic just a while before 4.30pm. As the event bib stated the event time is from 4.30pm to 8pm, we expected flag off for the run will be at 4.30pm but it’s at 5pm. No where states the flag off time as well 😂 We went to the toilet to pass time and saw counters to collect the step tracker with no queue! So shiok lah, I remembered last year I queued about an hour for it 😓 It’s a new step tracker with heart rate monitor, returned participants and new participants(Singaporean and PR) of the National Step Challenge can collect the new step tracker for free 😍 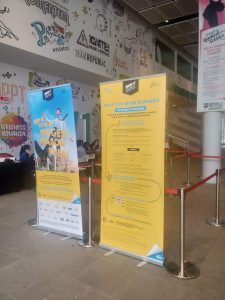 It’s a colourful event in a sea of green, blue and orange. Quite a big turnout, with many families participating together and that’s quite sweet. While waiting for flag off, instructors from Active SG which I feel did a rather awkward warm up 😆 It’s really awkward and I guess many participants don’t know what are they “stretching” or doing as well 😂 At 5pm, we were flag off by the Grassroots Advisor of Woodlands GROs. Weather was awesome, not sunny like I thought it would be. 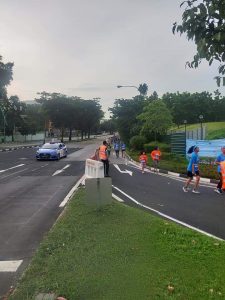 It’s a new route to me as I don’t usually run in this area. It was well organised and we ran on the tarmac roads, one lane of the road was cordoned off for the run. There were volunteers and traffic police around directing traffic and we were pretty safe as the entire(other than exits and bus stops) 4.6km showed on my Garmin we’re protected by water/sand barriers. Though there’s many lorries and air was bad at as it’s at the construction site.

It’s a big loop back to the end point and there’s one hydration point at about 2.6km into the run which I didn’t stop for water. At a last turn, I heard the volunteer said I was the second female runner and I chased though its a fun run with no prize 😆 Finally I overtook her at the last hundred metre of the run just feeling a sense of accomplishment that treasure knife haven’t old 😁 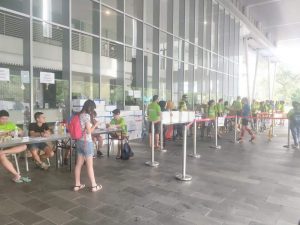 After the run we collected the finished race pack inclusive of medal(though quality not very good but at least there’s medal and it’s just $6 we get so many other goodies as well😍), bottle of water and 100 plus, and collected muffin, yogurt and a sandwich(which I ate on the spot). We left soon though there’s stage performance and carnival as Eleanor needs to go One North Run REPC and me to Santa Run REPC. 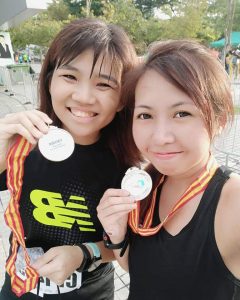 I would want to participate in the run again next year if there is! I think it’s the cheapest running event ever(other than free runs) and all the things I’ve gotten altogether seems worth more than $6 already 😆 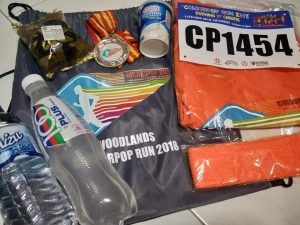