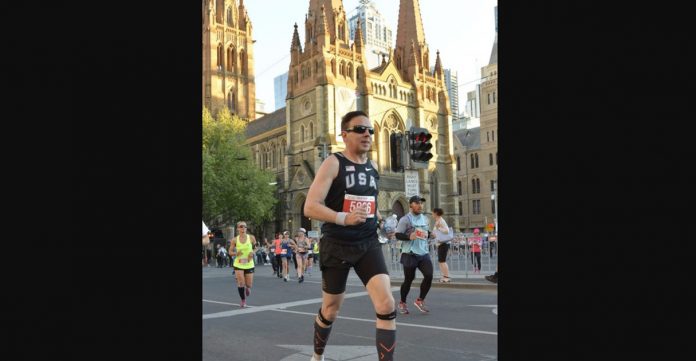 On a work trip to Melbourne three years ago, a friend told me about running toward the Melbourne Marathon’s Finish Line by taking a lap inside the iconic Melbourne Cricket Ground, and ever since then this race has been on my list. Finally, this month, I saw what all the fuss is about.

The organizers of the Medibank Melbourne Running Festival say that this is biggest field of runners in Australia, and once you add the 21km, 10km, 5km, and 3km events to the 6,000+ marathoners, I see how that can be true. I’ve run Sydney and Gold Coast before, so I’ve seen that Australian hospitality tends to create a good event, and that was definitely on display here.

After arriving Thursday morning following an overnight flight, I decided Thursday would not be my day to visit the expo and race pack collection. Instead, it would be a day for taking a nap and then enjoying some of the cafes for which Melbourne is known. The desk agent at my hotel was suggesting a 3-hour walking tour of the central city, but I tried to explain that with the marathon coming up on Sunday, I would do my touring in smaller doses.

I finally wandered over to the Melbourne Cricket Ground on Friday to pick up my bib and figure out how I would get there on race day. The expo itself was outdoors and fairly small compared to others like Gold Coast, but they had someone selling Gu, so I had all I needed. The Starting Line would be nearby, close to the Rod Lever Arena at the tennis center, but they would have a bag drop-off at the MCG, near the Finish. The website called it the Warm Clothing Drop-Off, so that gave me some expectations for race day, expectations that were about to be destroyed.

One reason I was excited about the race was the prospect of cool temperatures, which would be a nice change from running in Southeast Asia. However, on Friday, things seemed to be warming up, and when I finally checked the weather forecast, I saw that Sunday’s temperatures were projected to be 17-26C, not exactly what I was hoping for. The Warm Clothing Drop-Off suddenly seemed to be a cruel joke. Local folks whom I talked to told me they had the heat on in their homes just a few days earlier, but the temperature had spiked. Wonderful.

Race day arrived, and I took the tram to the station closest to the MCG. Start time was 7am, and I got there a little before 6, early enough to duck into the Warm Clothing Drop-Off (I still had my fleece in my bag, in hopes that a sudden Antarctic cold front would come whistling through). Everything there was very well organized, and soon enough I was walking over the Starting Line. There were no waves, no corrals, everyone just lined up, and when the gun went off, then off we went. It was all very relaxed, fun, and friendly.

The sun was just coming up, and the streets were wide enough that we didn’t feel too crowded, with no need to weave around each other. There was one small bottleneck a couple kilometers in, where there was some construction going on, but otherwise things moved smoothly. The early part took us through the city, and but within a few kilometers we had moved into a park. I’m not always a big fan of spending a lot of time in parks, unless they are down near the city center, because it’s hard for supporters to get there, and I always get a lot of motivation from cheering spectators. Plus, I like to break up my run into a series of little landmarks instead of just going for the next kilometer marker, so I aim for a building or a sign or a streetlight, then pick the next…but in a big open park, you don’t have many landmarks. So instead, I aimed for a pacer group ahead that I wanted to pass, and made it my mission to get beyond them. It worked, but about 10km later they passed me. Oh well.

Once we got out of the park, we had a lot of local folks along the roads helping us out. Kids were out there giving us candy, or just some high-fives, and that’s always awesome. At one point I saw two guys with a small hibachi grilling prawns, literally putting “another shrimp on the barbie, mate,” which was fantastic and not at all feeding into stereotypes haha. As we ran around the bay, the sky was a gorgeous blue, and the water looked wonderful, and it was a really good day for a run.

I entered the race with two timing goals: first, to shave time off my races from the last few years, and secondly, to come in below a particular time. I’ve been getting progressively slower the last three years, but I’d recently seen some positive changes in my running and fitness, and combining that with the low temperatures (which turned out to be a fantasy) I set some ambitious goals. At the 28km point, 2/3 of the way through, I was on track to finish 30min faster than my timing goal, which would be amazing. I had tried to slow down a little bit early on, because I was getting overeager, but doing well at this point was very encouraging. Looking back at my splits, I was still in good shape at the 36km point, and was predicted to come in 19 minutes below my goal, but that’s when the trouble started.

Though the course was mostly flat, there were some hills toward the end that proved a little painful. The real problem, though, was I developed a tingling sensation in my fingers, which is a sign of heat problems, either dehydration or heatstroke. I started doubling my water intake at each station, but I knew I needed to be careful. Looking at my watch, I still had a shot at making that second goal, but I would need to keep a steady pace. When I hit 39km, I could feel the tingling again, but now I was feeling dizzy, too. I had seen plenty of runners lying on the sidewalk with medics, and didn’t want to join them, so I started walking and tried to concentrate through the dizziness. If I had started seeing blue spots in front of my eyes I would have sat down, but fortunately it didn’t get that bad. I quit looking at my watch and just tried to run, albeit slowly, through the end. I was pretty upset at this point; it sucks to be so close to a goal and feel it slip away. Ultimately, though, you have to listen to your body.

During the final kilometer I quit worrying about goals and just focused on the finish. Entering the MCG was as cool as everyone said it was, and taking a lap around the inside was a great feeling. The stands were crowded in the final few hundred meters, and I yelled at them to “make some noise!,” getting some chants of “U-S-A, U-S-A!” in response. It’s pretty awesome to run through a 100,000-person stadium, even when there aren’t 100,000 people in it.

Crossing the Finish, I sat down until the lightheadedness disappeared, then made my way back to the Warm Clothing Drop-Off (by now, just something to laugh about) and collected my gear. By the time I got back outside I was feeling ok, and happy to have finished rather than upset about my missed goal. Of course, the fact I was faster than I’d been in three years took some of the sting out of it.

Melbourne is a great city, and the Melbourne Marathon is a fun race. A course made up of wide roads, a crowd that is big enough to be exciting but small enough not to be overwhelming, and (usually) cool temperatures, make this a great event for people from warmer climates to come and do well. And maybe, if you’re feeling up to it, you can do that 3-hour walking tour a day or two after the race.