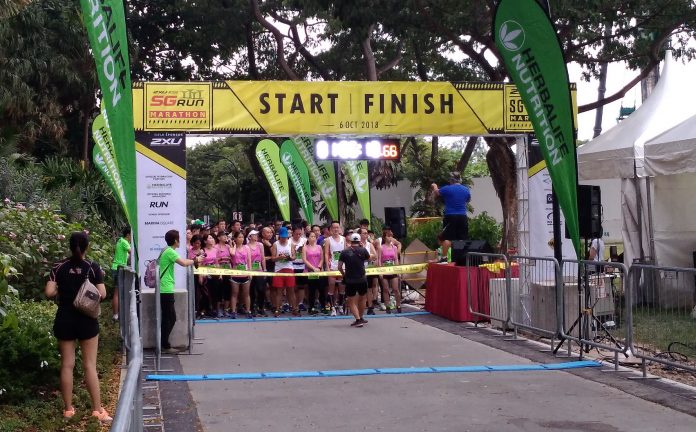 The 2XU SG Run is a 10 km and 21 km run that was held together with the 2XU SG Ultramarathon on Saturday, 6 October, at Gardens By the Bay East. The Ultramarathon comprises of 50 km, 84 km and 100 km and commenced earlier than the Run category. I took part in the 10 km run.

The annual Compression 2XU Run is held usually at the F1 Pit while 2XU SG version is held at the Gardens By the Bay East. The key variations between these 2XU events, apart from prices, distance and location, was that finisher shirt was given to the 10 km runners as well in the SG Run. In the Compression Run, only the 21 km runners are entitled to the finisher shirt.

The sky was overcast and it was lightly drizzling in parts of Singapore. Fortunately, the weather turned fine after a while and we had clear skies for the evening run. The 10 km race was scheduled at 6.15 pm. What I like about evening races is I have ample time to reach the race venue. Some morning races are held just too early to be arrived punctually via public transport.

I took train to the Sports Hub and arrived at around 5.30 pm.  Upon exiting, I saw a vast number of people wearing pink shirts starting off a walk. I realized these were the participants of the Pink Ribbon Walk. The Pink Ribbon Walk aims to promote awareness for breast cancer. This must be one of the events where the participants were mostly ladies, apart from The Great Eastern Women Run. I walked with them for a short distance, before parting ways at the Tanjong Rhu Road and headed towards Rhu Cross, the event site for 2XU SG Run. 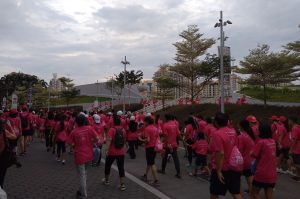 Many runners were already waiting at the Start pen when I arrived. The first wave was flagged off at 6.15 pm. I did some warm up stretching and joined the last wave. The route was the familiar Gardens By the Bay, Marina East Drive and East Coast Park. The 10 km and 21 km routes are the same – the 10 km route u-turned after the green pedestrian bridge (after Bike Stop) while the 21 km route extends to u-turn at East Coast Lagoon Food Village. 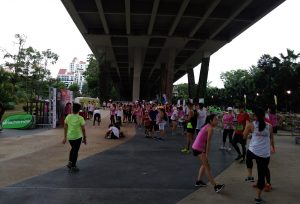 The Marina East Drive was closed to facilitate this run. There were 2 hydration points along the route, giving runners choice of cold water or herbalife . There were also pacers and cyclists, who rode ahead of fast (top) runners to clear the way for them.

The early evening was humid and by the time I reached the 5 km mark, night had already descended. I made my way slowly to the Finish Point, taking in the peaceful surrounding. My favourite part of a night run here was the beautiful scenery across at the Gardens By the Bay and City Centre. This was one of the reason I came today – to enjoy the night scenery and stay healthy with a good run.

I completed the race in my usual timing. I had considered to clock more mileage to prepare for my upcoming half marathon at HometeamNS Real Run, but decided to relax for the night. There were massages for the runners, but I decided to give it a miss. 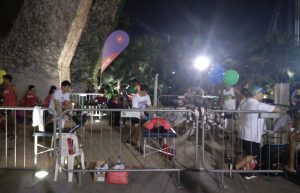 The organizers had prepared trophies for the Top 3 runners in each category. I felt this was a good gesture as I believe to some, a trophy means more than receiving prize money. It is a clear symbol of achievement and coming out tops in a competition!

I lingered a while more, before slowly walking back to the Sports Hub.

2) I wonder if there is any way to avoid running into Marina East Drive. That area is under construction and lots of dust. An alternative route could have been upon Start, head directly towards East Coast Park, u-turn and back to run along Gardens By the Bay East. I ran this route during last year’s Light of Hope Run. It was a run in support for those with depression and mental health issues. A simple but well organized event and it remains one of my more memorable runs.