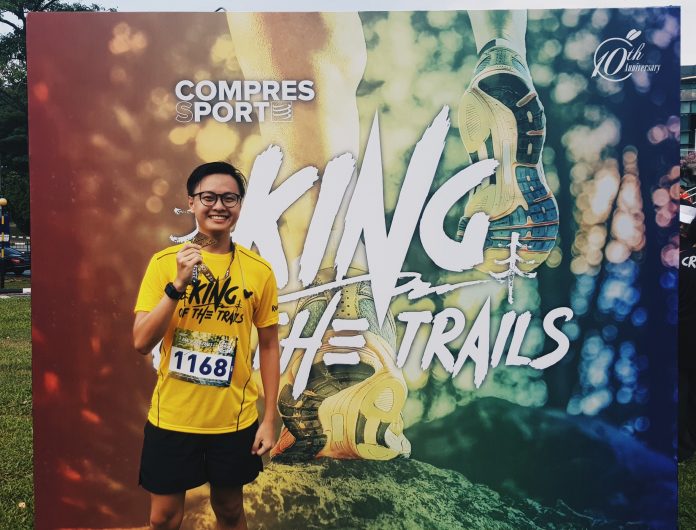 rugged (ˈrʌɡɪd): having or requiring toughness and determination

seeker (ˈsiːkə): a person who is attempting to find or obtain something

Initially, these were the definitions I understood of the term “Rugged Seeker” – the title for Leg 2 of the King of the Trails Series of trail running routes.

“What a daunting title“, I contemplated: “Not really for someone like me to take on“. Of course, there was some degree of hesitation on my part (considering my smaller frame), to take on a tougher physical activity. Yes, I do enjoy looking for challenges, for new what ifs and for their possibilities but this time, it was different. After much contemplation, I decided to take the plunge and just run lah. Again, I chose to register for this race with my Dad, considering how he has been into trail running recently.

This race (as well as the preceding leg) required us to bring our own bottles, in efforts to prevent wastage of plastic cups. This arrangement impressed me, knowing that the sight of plastic cups littered along the trail would put me off. Kudos to them for that idea! With that in mind, I decided to bring a handheld squeeze-bottle from my running belt.

Trail running (unlike regular road running) was more strenuous and mentally draining. In the months leading up to the race, I went on several runs at MacRitchie Reservoir (the initial location for the race) to test out the difference in terrain. Several main differences stood out: the inconsistency of the elevation, the presence of rocks and roots and angle of incline of the path. To compensate for all that, I learned to readjust my gait to take smaller, light-footed steps, which allowed for more flexible movement.

Gradually, I came to a realization for trail running – it is never about how fast or agile you were. Instead, trail running increasingly brought out more of a greater connection of self to nature and creation. My perception of being on the trails was changing and my anticipation for the race grew.

Just two weeks before I hit the trails, I headed down to Velocity Shopping Centre, where I collected my race entry pack.

As expected from a small race event, there was no queue for the collection! However, due to some logistical reasons, we were not able to collect our drawstring bags there. Nonetheless, the staff-workers were patient in explaining the details for collection during race day.

Race day arrived and began with an early morning rise to reach the venue by 7 am. This leg of the series was held near Bukit Timah, along Hindhede Drive. My Dad and I arrived early, so there were no issues regarding traffic congestion in the area. 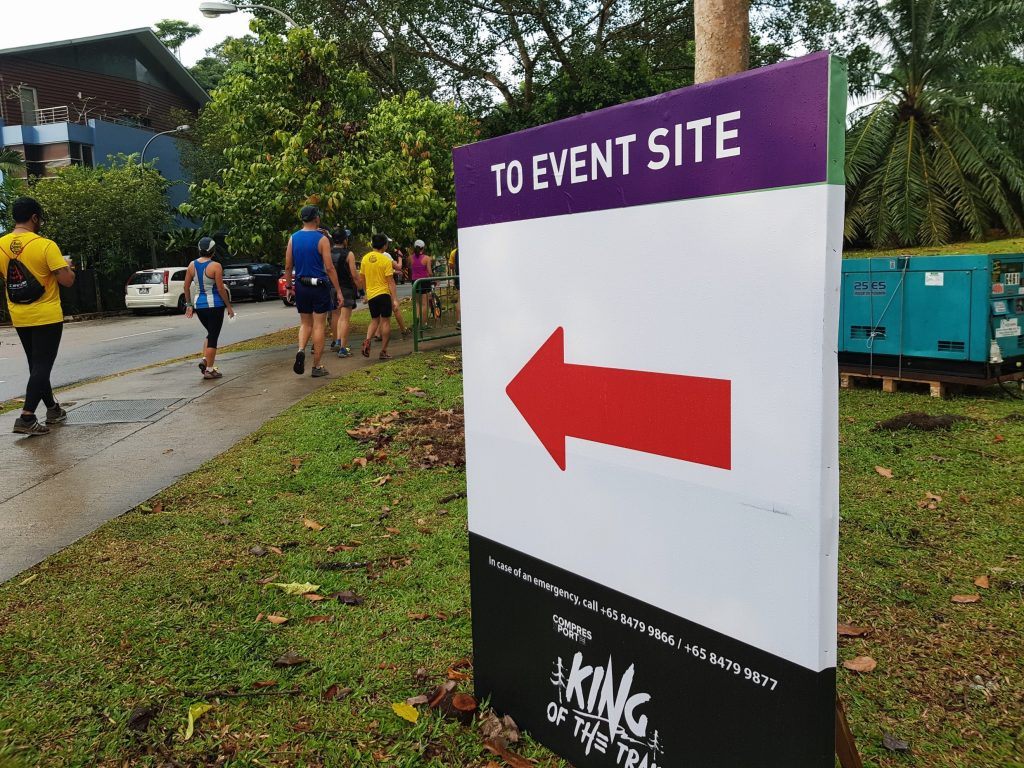 The road led us to a clearing, where loud, upbeat music greeted us and volunteers welcomed us. Across a smaller road was the starting point for the race. The carnival had the usual first-aid post, baggage deposit stations, water point, and photo-booth.

The crowd was just nice: neither too thin nor too congested. That might have uplifted the atmosphere substantially, breaking the morning silence of the surrounding forested areas. Just 5 minutes before flag-off, I lined myself up with the other race participants at the start point (which I admit was slightly stuffy) to prepare for the race. Several stretches and deep breaths later, the air horn sounded and the runners took off.

I held my head high for a deep breath and began my journey on the trails along with the rest. The initial track was less technical: starting with gravel and small rocks that were relatively even. This path brought us through the next 2 km before the upward incline came. Larger rocks were being introduced, with the occasional tree root in the way. As I approached this section, my music stopped abruptly, which threw me off momentarily. After regaining composure, I soon realized my blunder – my Bluetooth headset was not charged beforehand! Barely recovering from my mistake, I put away my headset and dove into the canopy-enclosed section of the trail, unaware of the blessing in disguise lying ahead.

Almost immediately, scents of all sorts hit me, but mostly of earth and floral ones. As the trail was cutting through the forest, I found myself among the trees, taking in all the sounds and sights around me. It then hit me – it was because of my Bluetooth headset failing me that made me all ears to the sounds of nature around me! For once, I was contented with running without my “EDM Running Workout” playlist. In a way, it was a reminder for me to pause and open up to appreciate the surroundings around me. Nature, you never cease to amaze.

Shortly after, I approached the half-way point (demarcated by a sign) with multiple water-refill stations. Having taken only a few sips from my handheld squeeze-bottle, I decided against taking any water and carried on with the race.

The next challenge came up no further than 1 km away: the mudflats. The trail led us (the participants) along a slope with a decreasing incline which ended up in a clearing. As others let out sighs at the sight of the mud ahead, I was more than ready to tackle it. The entire path was filled with ankle-deep mud (which honestly wasn’t that bad), and there was no way around it. This was where everyone slowed down to a walking speed to wade through the muddy soil. The invigorated, inner child in me came alive as I made progress through the mud. Although my shoes were completely covered in mud, I paid no mind to them and moved on. I wasn’t going to let mud stop me.

While racing up the grassy hill incline ahead, a light rain started showering overhead, cooling my face and body. This only motivated me further as I pushed on towards the upcoming rocky area.

Once again, I had no choice but to slow to a walk to scale the sharp ascent of the rocky hill. “Great! Finally some variety in the trail“, I thought as I tried to keep positive throughout. However, in all honesty, I was breathless. Really. A few gulps of water (from my bottle) and many painstaking steps later, I neared the top. Upon arrival at the peak, a sense of accomplishment swelled within me and gave me a brief energy boost.

Up next in the trail was another forested area, which brought me amongst the foliage. This time, I knew the finish line was near – the slope was beginning to make a descent and cheers could be heard. As I crossed the finish line, a second wave of accomplishment swept through me.

Volunteers cheered as they handed out finisher medals, alongside cans of 100 plus isotonic drinks and bananas. I took my share of entitlements and left the area for the carnival.

The carnival was more lively after the race, considering that most finishers were looking for somewhere to cool down. Many race participants were foreign, who seemed to appear only for trail running races. My best guess was that they joined just to feel closer (although possibly slightly) to home. After the skies cleared up, I met up with my Dad to snap some photos at the photo-booth provided.

After collecting our drawstring bag runners’ entitlement, we lingered a little longer to hear the announcement of the race winners. After finishing our cans of 100 plus and bananas, we finished off with some cool-down stretches and left for home.

As a whole, this 10-kilometer trail run was much better than expected. From the change in the venue from MacRitchie Reservoir to Bukit Timah to the environmental conservation efforts, my expectations were surpassed. The whole outdoor experience won me over. Despite being a small event and for the minor logistical problem regarding the drawstring bags, I would still consider the event a success. Trail runs have officially become one of my favorite. 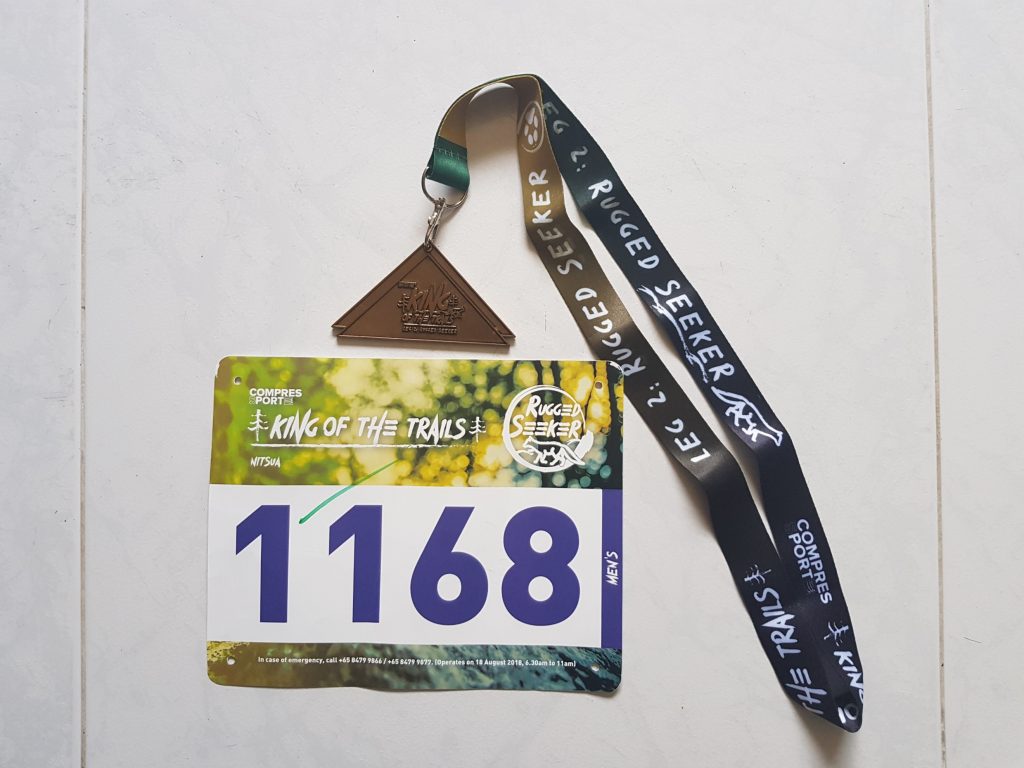 My initial decision to join “King of the Trails: Leg 2 Rugged Seeker” was purely based on the definitions I had looked up online. I signed up, hoping that I would be able to witness how a person could be deemed as “Rugged Seeker“. However, throughout the course of this entire trail running experience, I felt them being redefined.

The main point was that there was seeking involved and no one has actually “found” ruggedness. It was the idea of running enthusiasts (despite the difficulty) continuing to contend against their mental barriers and push their physical limits that brought me to this realization. I realized that the whole idea was to start seeking experiences, just like how others there were doing. Without the first step, no one would be able to face a challenge and improve themselves.

This race also rekindled a spirit of adventure and an inner bond with nature with all its limitless things to offer. I never would have known that the nature sounds, the light drizzle, the muddy plains, and rocky hills would have brought out so much joy in me. This was indeed a refreshing experience.

However, all things considered, you might not share the same opinions as me. Do not just seek after anything and everything but things that are of importance to you.

This race reminded me to seek after the Kingdom of the One above, even if it gets rugged and tough. As I know it would be far more rewarding than a finisher medal could ever be.

Thanks for reading and till my next write-up, continue chasing after new experiences, God bless and have a great day ahead!