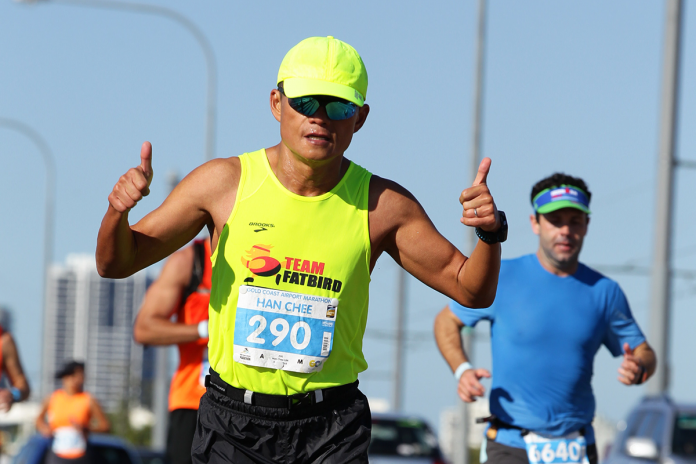 Why do you keep returning to run GCM?

Gold Coast is a beautiful place to go to for marathon running. The course is flat and fast, with the added lure of the golden surf beaches and the spectacular Pacific Ocean. I like the Gold Coast marathon course a lot. It is a course designed to be enjoyed.

The other main appeal of GCM is the cooling conditions, also known as the ‘air-conditioned weather’. The chilling temperature of between 10 to 20 degrees is ideal not just for running but fast running.

In term of race organisation, GCM is a gold-label road race of the very highest order in which the organisers got everything right. The race has real qualities stamped all over it, and they looked after runners very well every step of the way.

As a race per se, GCM offers runners very good potentials to run our personal best finish time. I have achieved seventh PB in the 10 years that I’ve been running the race – I am in seventh heaven!

Gold Coast continues to make me feel good and keep me going back for more. There are plenty of reasons for me to keep returning to run GCM.

Is there a memorable year for you? What is it?

The 2010 edition, my 2nd race, is my best and the most memorable race. On the cold Sunday morning of 4 July 2010, I ran my heart out to finish under four hours for the very first time, a significant personal time barrier.

The whole race was a great experience. I had a good pace from the start and held it for the most part of the run. In the closing stages of the race, I ran as fast as I could, and crossing the finish line in 3:57:23 was pure euphoria!

The 2018 edition, the 10th race that I just did was also memorable as I will be using the finish time to register for Boston Marathon 2019. In a way, you can say Gold Coast is the making of my running dream: My road to Boston.

Through the good timing that I achieved in GCM, I really hope I can get a slot in the world’s oldest and most prestigious marathon when the registration for next year’s race opens in September 2018.

What tips do you have for running GCM?

GCM starts at 7:20 am. With the great ocean view, crisp morning air and very runnable conditions, it is easy to just run lah and then run too fast at the initial kilometres. So the advice is to exercise restraint, start at a moderate pace and to conserve energy for the second half of the race.

The first half does not quite matter. What really matters is the second half. In term of effort, the second half equals, if not more than the first half! For me, the real start point of GCAM will always be at the 32 km mark near the McDonald’s along Gold Coast Highway.

So do make sure you are still feeling great and have good energy for the second half of the race. The final 10 km is what GCM is all about. That’s when the race gets tough and runners start to hit the wall.

Another advice is a fuel plan. Though GCM offered drink and isotonic at all of its drink stations, including energy gel (Endura) near the aid station at the 31 km, it is highly recommended that you carry with you the brand of energy gel you trained with and were used to. This will avoid unnecessary stomach issue during the race.

Have you run other overseas race? And if yes, what do you think sets GCM apart from the race?

Yes, I have. I have run and finished 55 marathons including 23 overseas races, 14 ultramarathons and five World Marathon Majors.

Personally, I find most of the big city marathons that I have run, while mostly flat, have too many turns. E.g., Chicago Marathon has 30 right-angle turns and Rome Marathon has a staggering 77 bends and corners!

As runners will agree, turns, bends, corners and quick changes in direction will disturb the pace and slow down the race. Turns especially sharp corners can also lead to race congestion. And if you don’t run the tangents, they can really add extra distance to 42.195 km.

In Gold Coast, the runs are mostly along straight roads parallel to the coastline of Pacific Ocean, with only two u-turn points: one at the south and one at the north. By straightness GCM definitely stands out as a fast course and sets it apart from other races I have run. 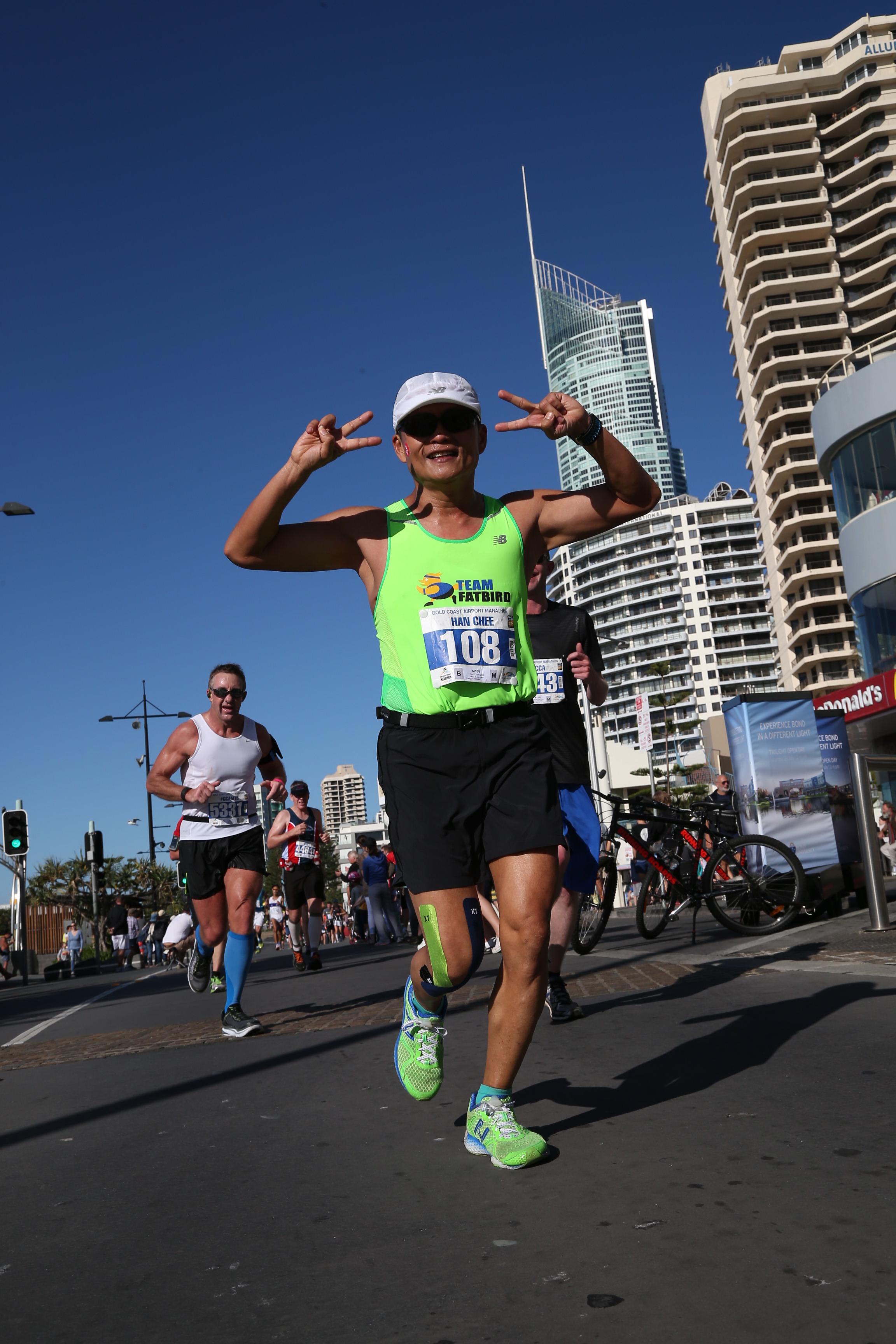 GCM’s slogan – come for the run, stay for the fun – what fun will you recommend?

Marathon aside, Gold Coast in itself is a fun tourist destination and famous for its many theme parks that bring smiles to people of all ages. Those who are adventurous can also go for sky-diving and jet boating for more fun.

Other than pure fun, Gold Coast is also famous for its ‘shopping fun’. For sports enthusiasts and running fanatics, I would recommend the Habour Town outlet shopping where you can like buy major sports apparels at hugely discounted prices.

If you have a bit of time, do consider heading out of city centre to Robina Town Centre, the second largest shopping Centre in Gold Coast after Pacific Fair. With food and sale galore, Singaporeans will love this as a fun place to chill, dine and shop after the hard race.

Will you return for 11th year?

After a decade of running it, GCM continues to reward me with solid race experience. Running straight along the Pacific Ocean, Gold Coast is a great fast course. The conditions are always good and the race has real qualities stamped all over it.

Gold Coast is still very appealing. I will definitely run the race again.