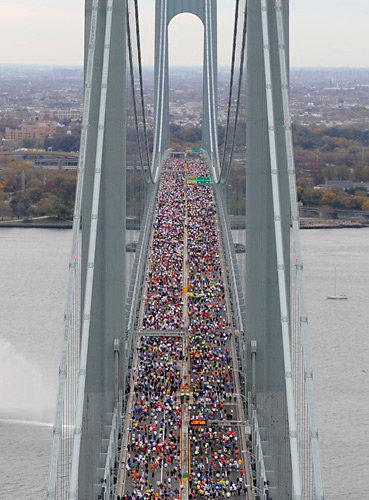 On November 4th, New York City will pretty much shut down (well, as much as New York can ever shut down) for the TCS New York City Marathon. The registration period for the lottery is open now, but closes on February 15. As an Ambassador for the Abbott World Marathon Majors, and as someone who ran it in 2010, I feel it is my solemn duty to say SIGN UP NOW!!

Why sign up? Why fly all the way to the US just to run around a city for a few hours? Well, here are 5 reasons:

The picture of crowds running across the Verrazano Narrows Bridge at the Start is one of the most well-known scenes in marathon running. This is the largest race in the world, with over 50,000 finishers in recent years. If that sounds like it could get pretty crowded, well, it can, but these folks know how to organize a race, and they have figured out how to get all these people around New York (just don’t try to pass people for the first mile — as you can see, it’s a bit tight on the bridge).

I ran New York only 2 years after my first marathon, but it seemed like such an amazing race that I wanted to be a part of it. Unlucky in the lottery, I instead ran on behalf of a charity, raising money for the Memorial Sloan Kettering Cancer Center. On the charity team, as well as at the Start and Finish, I met some very cool people from all around the world. People come from everywhere to run New York.

Not only is New York the biggest field of runners in the world, the crowd of spectators is also among the biggest. Expect upwards of two million people to be on the streets cheering you on. Yes, you read that correctly: TWO MILLION. Put your name on your shirt and you will have strangers calling out to you pretty much the entire route. At times, there were so many fans that they seemed to flow off the sidewalks and into the street, giving us a narrow passage, but the energy and enthusiasm they bring will keep you moving fast. 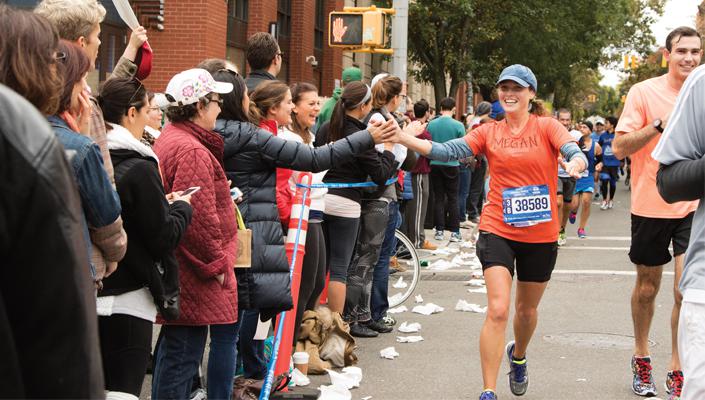 I’ll never forget running over the Queensboro Bridge from Queens into Manhattan, and hearing a roar that sounded like huge air conditioners. I thought that was strange, since it was November. As we crossed the bridge and turned onto 1st Avenue, I found the source of the noise: thousands and thousands and thousands of people along both sides of the street, packed 10 deep, cheering and screaming and yelling our names. My friends were along there watching for me, but there was no way I could find them. That’s OK, though; I saw them near the Finish in Central Park, where I really needed a boost the most!!

One of the very cool things about the race is that it covers all 5 boroughs: Staten Island, Brooklyn, Queens, the Bronx, and of course Manhattan. Each part of New York is different, and you will see a wide range of bands, choirs, street performers, and just fans in general as you make your way through every part of the city. Of course, running between the boroughs means running across plenty of bridges, so do some hill work before you go! 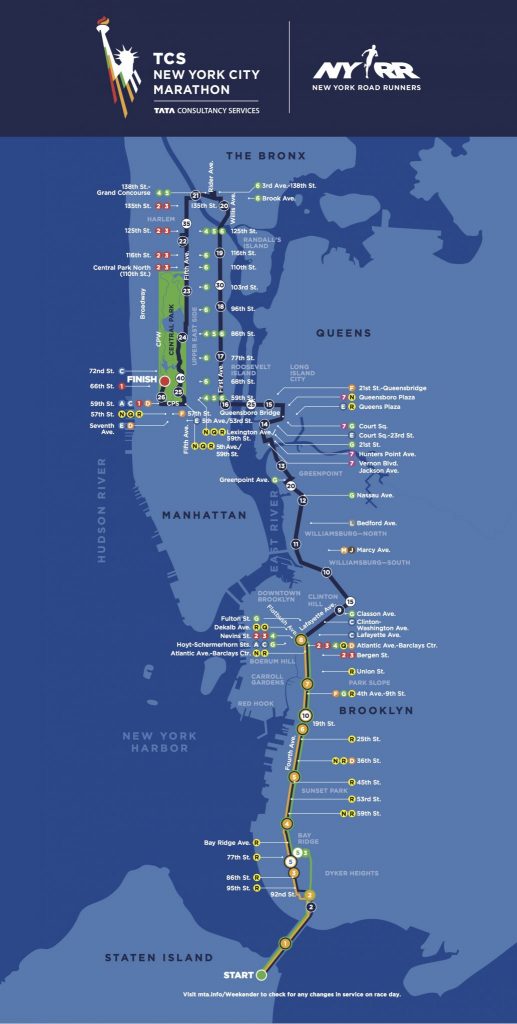 We spent a lot of time in Brooklyn, and the seamless transition from one neighborhood to the next reminds you of just how diverse this city is. We went from hearing music with a Latin beat, to people yelling at us in Italian, to little kids in Hasidic Jewish clothing screaming and waving. Running from the Bronx into Manhattan we went through Harlem, with a great sense of history around us and a gospel choir that would send chills down your spine, before racing down 5th Avenue toward the Finish.

The six biggest marathons in the world – Boston, London, Berlin, Chicago, Tokyo, and of course New York – comprise the Abbott World Marathon Majors. The best runners in the world compete in these races, and you are lining up at the same Starting Line as them. That’s one of the great things about running in the Majors; in what other sport will you play on the same field as the champions? And of course, if you run all 6, there’s a very special award for you. 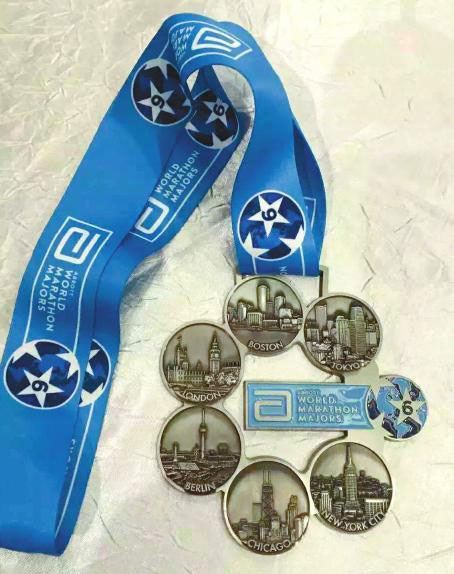 When I ran in 2010, I beat Haile Gebrselassie, who at the time was the reigning world record holder at 2:03:59. Now, when I say “I beat him,” what I mean is that he got injured and had to drop out around Mile 16, whereas I finished. So, I completed the race, he didn’t, and therefore I beat him. OK, so maybe that’s not exactly “beating the world record holder,” but when you are all in the race, you are all competing against each other, and there aren’t many other places where someone coming in off the street gets to compete against world champions.

If you’re looking for an excuse to visit New York, this is a pretty good one. Wouldn’t you like to see the city at least once? Whether your vision of New York is the Manhattan of Sex and the City or the Brooklyn of 2 Broke Girls, you’ll not only get to see it all during the race, you’ll have the days before and after to enjoy it, too. 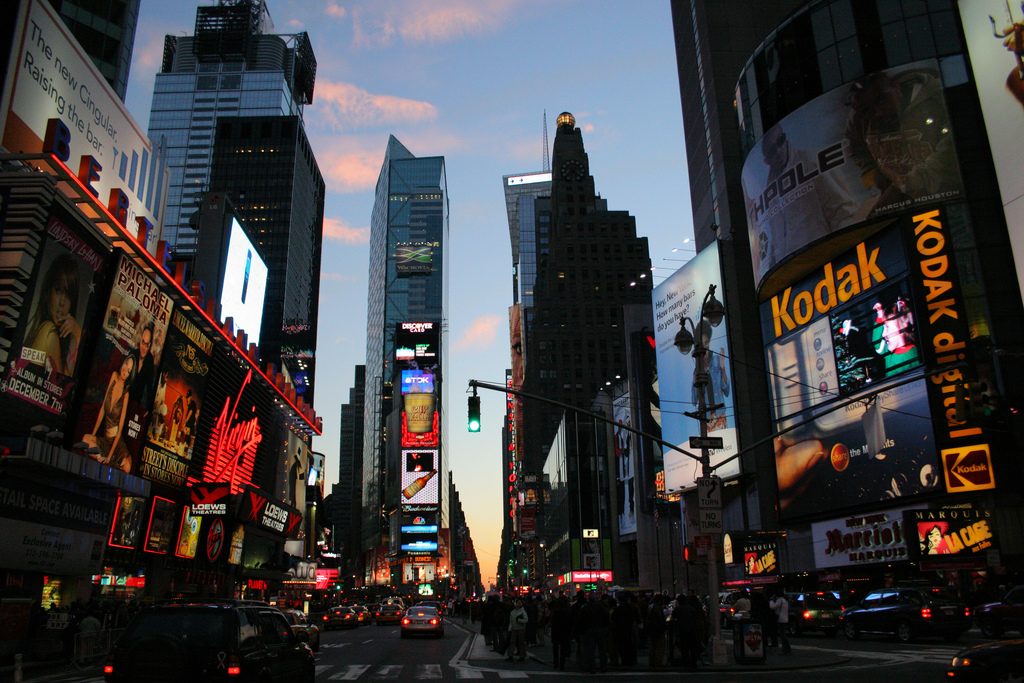 Tell people you’re there for the marathon, and they will turn on the charm. New Yorkers love the marathon, which you will see on Medal Monday, as finishers wear their medals all day (and walk a little funny, too – it’s pretty obvious who ran, especially when they try to go up or down the steps at the New York Public Library). If you have never run one of the Majors before, you will be surprised by how much the city gets behind this race.

So there: 5 good reasons to sign up, and no good reasons not too (because I didn’t include them haha). Remember, you have until February 15 to register for the lottery (and if you don’t get in through the lottery, consider one of the many charity options).