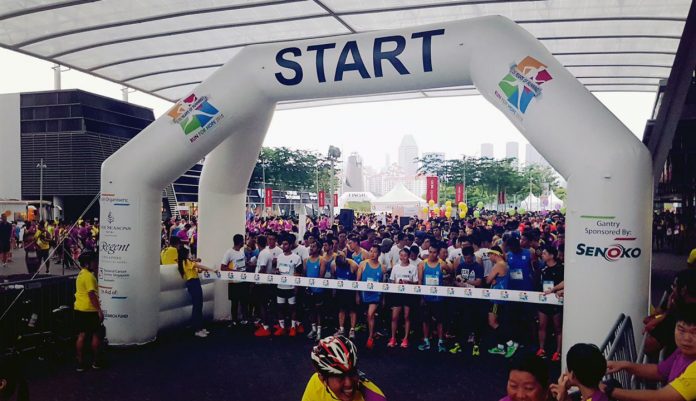 Singapore, 21 January 2018 – Run For Hope 2018 celebrates its 25th anniversary as Singapore’s largest run for cancer awareness and research. Co-organised by Four Seasons Hotel Singapore, Regent Singapore, A Four Seasons Hotel and the National Cancer Centre Singapore (NCCS) since 2008, Run For Hope has raised close to $1.5 million in nett proceeds for the National Cancer Centre Research Fund. A new logo was unveiled to commemorate this milestone, using the design of a silver ribbon emblazoned across the iconic Run For Hope logo, symbolic of a runner crossing the finishing line. The logo illustrates and represents medical breakthroughs, a will for victory and a determination to reach a desired goal, both in a personal capacity for patients and their support network.

This year’s run was graced by Mr Chee Hong Tat, Senior Minister of State for Health, Communications and Information, who flagged off the 10km category and participated in the 3.5km run. Joining in the good cause were Team Singapore athletes as well as celebrity Paul Foster, Daniel Yun (local filmmaker) and Eden Ang (YouTube influencer), who all ran along the stunning city view route that passes through the Kallang Bay area, Marina Barrage and Gardens by the Bay. In addition, 23 children from the Singapore Kids Philharmonic Orchestra played the violin, viola, flute and trumpet as they greeted runners at the finish line.

Cancer survivor ambassadors who were present at the run, shared their personal stories to raise awareness on cancer research:

Ms Sherona Shng, Run For Hope 2018 Chairwoman and Hotel Manager of Four Seasons Hotel Singapore said, “For our Silver Anniversary, we wanted the focus to be on our cancer survivor ambassadors and their support network. Each year, more than 12,000 people in Singapore are diagnosed with cancer, and chances are we might know someone dear to us who is affected by this disease. Cancer research has resulted in a higher chance of survival and our contributions today give hope for a cancer-free tomorrow. We are grateful for the support of close to 10,000 attendees at this year’s Run For Hope and we thank all for their commitment to this meaningful cause.”