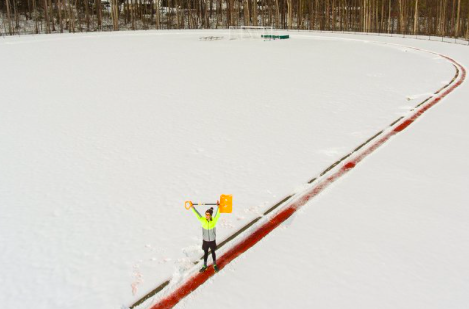 Often the treadmill is referred to as the dread-mill. One high school runner however probably hated running on the treadmill more than any one of us.

Quinn Schneider woke up to 8 inches of snow to his doorstep. Everyone loves the snow because it means – school’s off! Quinn loves it too, but being named the State’s best cross country athlete of the year, he is different.

He could have easily taken the day off, but he thought about what an Olympian would do. No snow was going to stop him from his training regime. He wasn’t going to let the snow be an excuse not to run! He truly embodied the no excuses phrase!

He needed to stay on his routine. Straying from your routine would make it less effective! So, he picks up a shovel – and – walks out the door.

He waded to his high school track and started digging. He ended up doing a workout before his workout. He shovelled the snow off one of the lanes which took him about an hour and was well worth his effort. All that work was so much better than having to run on a treadmill, Schneider says.

He ended up running 10 miles that day. What a great cross training workout, and a great run to finish it off! So so cool!