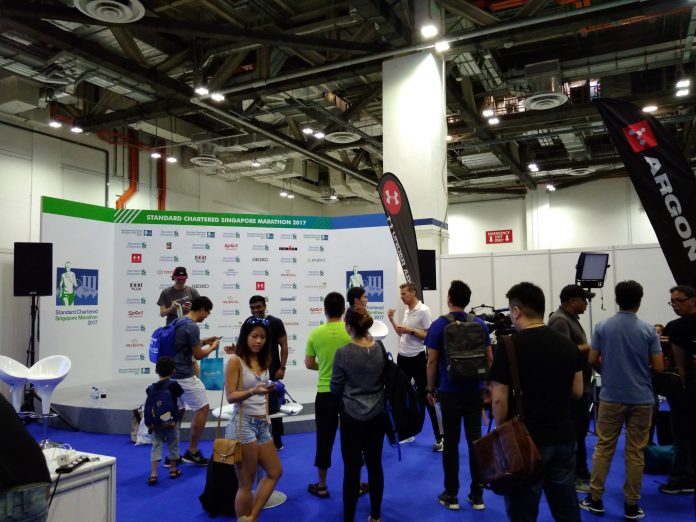 This marquee event, aptly called by some the ‘Race of the Year’, took place from 2 Dec to 3 Dec. The running routes encompassed going through the many iconic heritage places we are familiar with.

Personally, I think this is also one of the very few races where the authorities allow the closure of major roads to facilitate the run. It is little wonder then many serious runners opt to run in this race, with participation from runners around the world. This is one reason I decided to try my first half marathon in SCSM!

I do runs once every 4 days, one longer run during weekday and a shorter recovery run during weekends. To give my body enough rest before SCSM, I stopped doing any physical training one over week before the race day. This was also to create the ‘hunger’ to run.

Runners can retrieve their race kits from 30 Nov to 1st Dec at MBS – a 3 days period before the ‘Kids Dash’ event started on the 2nd. Though I believe this arrangement of collecting the race kits just before the race itself is probably to maintain the ‘hype’, personally I would prefer to collect the race kits at least one week in advance. The reason is because I like to try out the event tee for a final preparation run before the race – either to have a feel of the tee or to exchange to another size with other fellow runners. Well, this is only my perception.

There were many counters for the race packs collection. There wasn’t much of a queue when I collected on Friday at around 11 am.

One thing I like during the race pack collection is you were able to deposit your bag right away. I think this will save a lot of time queuing for bag deposit on the actual day. Things may simply get dis-organised or ‘rowdy’ when you have so many participants!

The REPC itself was like a mini market of sorts, with the sponsors and partners marketing their products. This must be one of the largest of its kind in local races, apart from the OCBC Cycle where merchandisers market on cycling products.

There weren’t too many people, so I managed to get a photo shot after a relatively short queue! I think this is the advantage of collecting during weekdays?

I tried to give myself at least 5 hrs of sleep before waking up at 1.15 am. But ended up didn’t sleep a wink, perhaps due to the ‘excitement’ of the race couple of hours away. Also, not used to sleeping so early. So far, only the duathlon and spartan race had given me sleepless nights (Lol)!

I opted to take the shuttle service. Pickup location was at Bedok Interchange at 3 am. It was nice to see runners gathering at the stated time to go together, even though we may not know each other. Well, there was this ‘sense of common purpose’.

The atmosphere was good. People were chatting, taking group photos, doing warm-up exercises etc. I proceed to search for the available restrooms to use, but some volunteers whom I asked did not know where they were located. Until I headed towards Mandarin Hotel where the staff (Lol) directed me to ‘Scape’. It was also then I realised that was where the bag deposit areas were as well as the mobile restrooms – just outside Scape.

The baggage queues were really long. Fortunately, I had decided not to bring any bag as I believe the queues could be long. I had this bad experience in another race where the queue was long and after depositing my bag, I did not have the time to queue to use the restrooms (Lol). Lesson learned, I guess.

I entered Pen ‘D’, which I guessed was for runners with the same projected finish times (which we indicated during registration). Everyone was full of expectation waiting for the gun to go off.  After kicking off a number of waves, my turn started off at around 5.10 am.

It was a very hot and humid morning. I had hoped for a rainy saturday and followed by a cooling sunday morning (Lol)! The event tee was not dri-fit, so the perspiration really took a toll on me. Really not comfortable to run when your shirt was ‘sticking’ on you.

Fortunately there were sufficient hydration points along the route. Both plain water and 100 plus were provided, which I think was good, giving runners options to choose. Not only did I drink up, but also pour some water on myself to cool off to prevent heat exhaustion.

My knees started to hurt quite badly and ‘locked’ when I reached around 16 km mark. The rest of the run wasn’t easy then, as I started to walk, hop (Lol) and jog. Each stoppage I needed to do squats and stretching to relieve the pain before continuing to run along at a very slow pace. I controlled each stop to 1 min or 2 min, as I know anything longer than that my heart rate will slow down and cause ongoing running even more difficult as momentum was lost. I certainly did not want to DNF for my first half marathon!

The run up Esplanade Drive was excruciating, as I need to endure knee pain and at same time, tried to hurry along to pass the Finish Point under 3 hr, a personal target.

At the Finishing Point

The crowd was good. I believe many had come to cheer for their friends. There were  tourists too, some of whom encouraged runners to endure the last few metres to the finishing point.

Medal collection was smooth and each runner was given a hand towel dipped in ice cold water. Apples, bananas, bottled water and 100 plus were provided as well.

The closure of major roads allow the runners to run in relatively wide roads. I feel this was good as it gave faster runners a wider berth to run without having to ‘zigzag’ through front runners. The routes were relatively flat, except for the slopes we (half marathoners) encountered at the Sheares Ave and Esplanade Drive.

I also feel the event was well organised, considering the huge number of participants, though there were some feedback regarding the bags deposit and road closures affecting some residents/businesses in Chinatown. Well, the event organizer and authorities will have to think of ways to improve this for next year’s run.

On hindsight, I believe this timing could be improve if I increased my training activities before the race, and of course, my knees gave lesser problems. I had expected to finish between 2:30 to 2:45 hr, so the result was a bit disappointing even though it is a ‘sub 3’ (Lol).

Targets for Next Year

I don’t aim for specific PB, but having said that, I do hope to improve my timings. I will probably take part in another 2 half marathons, which events I have more or less identified.

Lastly, congratulations to all runners who completed their races and got their well deserved finisher medals.