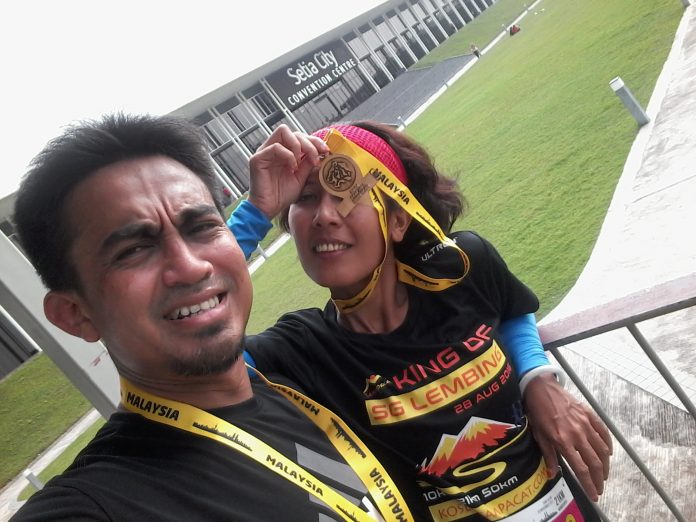 So we’ve ran some races before, but this was a different ballgame altogether. 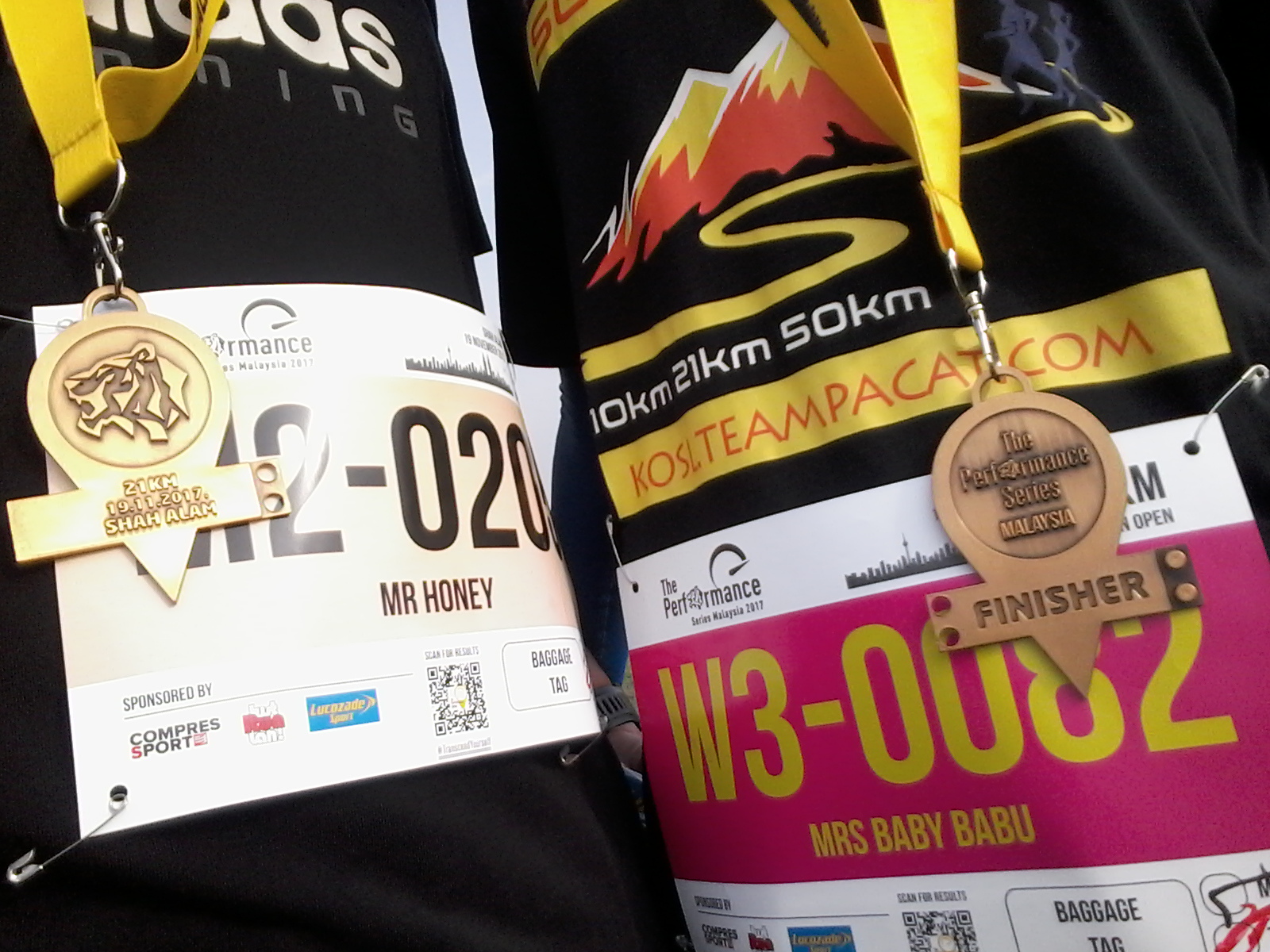 It wasn’t easy, to get here. Or there, depending where you’re at.

I’ve never been able to just sit still,
as he always asks me to chill.
It took us forever to get here,
With loads of challenges to endure. 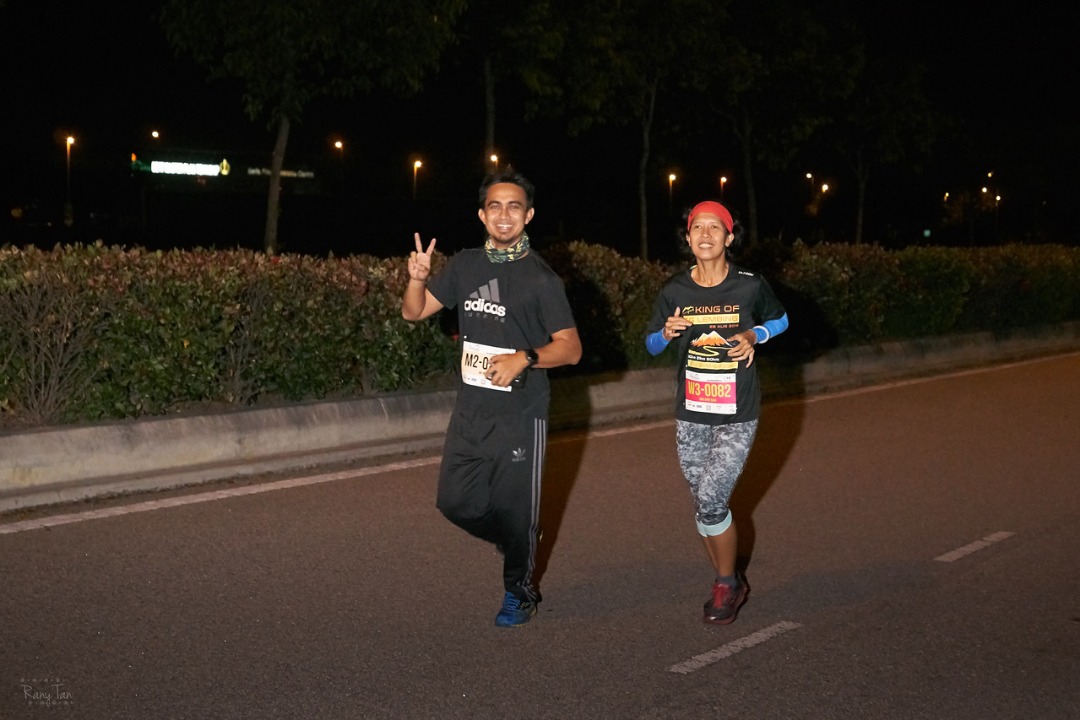 I’ve always had goosebumps before any games – no matter how far the distance is.

But this time, somehow, it was unlike any others before.

I finally get to run with my soul mate.

Before you think I got all mushy and cheesy, the goosebumps were also due to that I was worried and anxious of running with just one contact lense on – the left one refused to co-operate that morning.

So I was going to run with one eye clear, and the other so blur that I could only see what’s right in front of me.

But least I’ve got The Hubba to guide my vision. 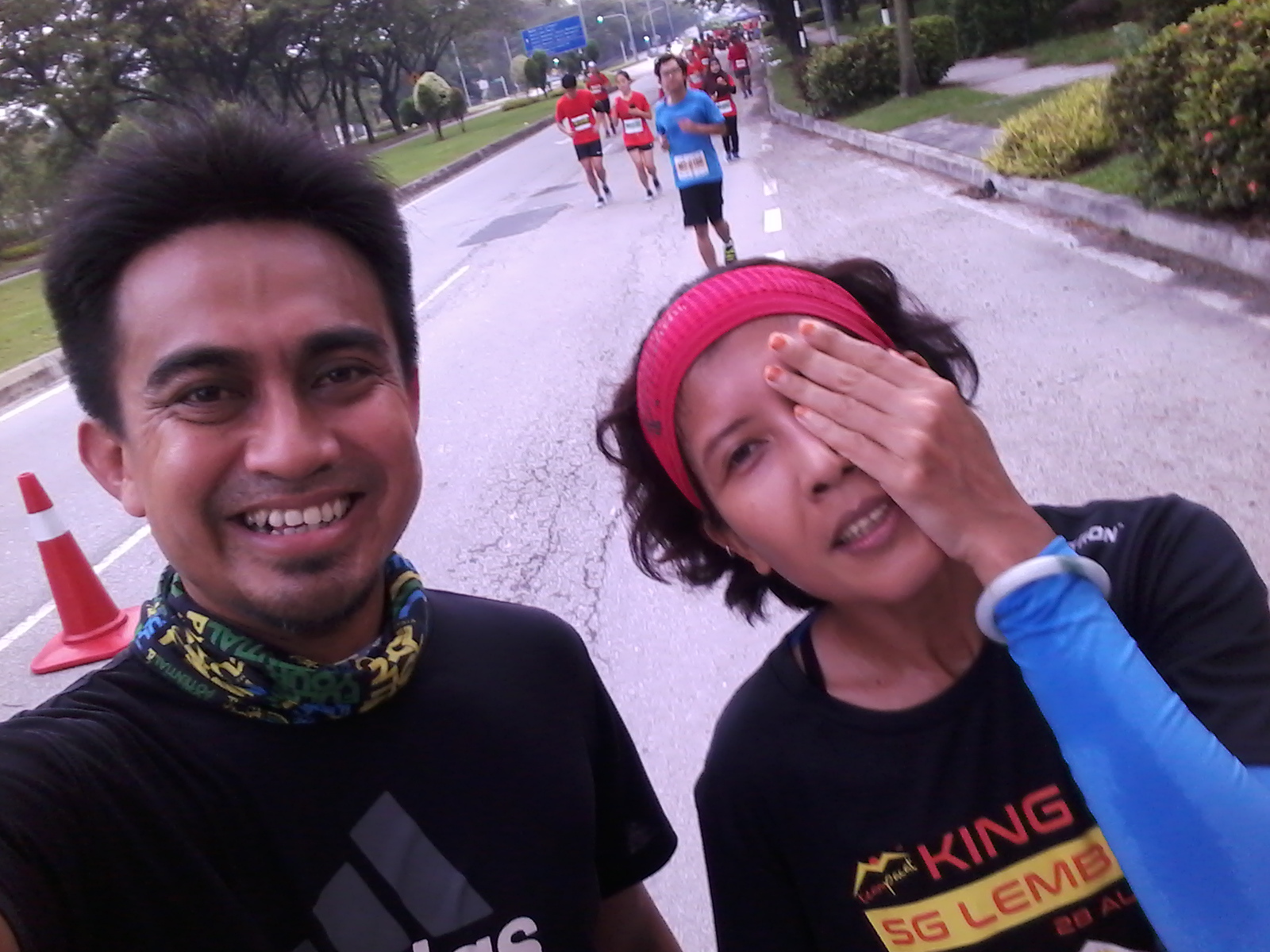 We got to Setia Alam plenty of time before the start at 6am. However, The Hubba needed to perform his Subuh prayers first, and there was a long line of queue to get to a water source (translated as: the portable toilets).

And then, as he was about to perform the prayers, there goes the 21KM runners, being flagged off.

All of a sudden, memories of high school flashed before my eyes – how I always avoided running by giving many (false) health excuses, when they were just fears that I’d either finish last or didn’t get to finish the run and being teased mercilessly by my classmates.

And that was some 20 plus years back.

Then The Hubba snapped me back to reality and said ‘Eh, just run lah (see what he did there, justrunlah.com?). Don’t worry. We’ll catch up’.

So we pushed off about 10 minutes after gun time. No one else was around, except for a few late-starters like us. 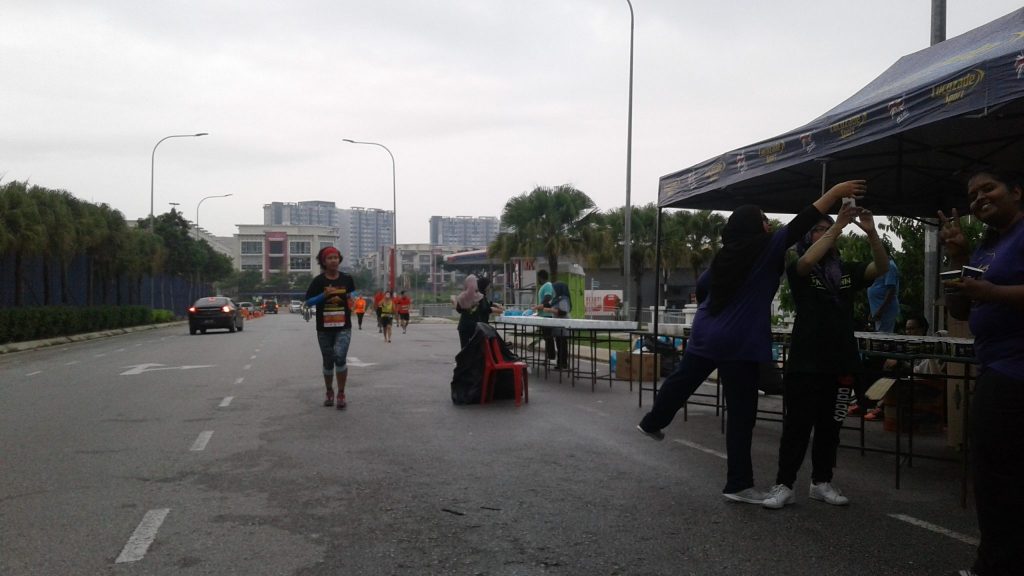 Everything looked deserted and then suddenly, The Hubba saw a very familiar sight – it was Rany Tan, the famed photographer!

He’s always around during our running games, capturing all the great running moments – but then he went off the radar for quite awhile.

Only then we knew that he’d been having some problems with his shoulders – but he was back in action on that day!

So off we went, and caught up with the rest of the other runners (flashbacks of being last in the game was then gone). 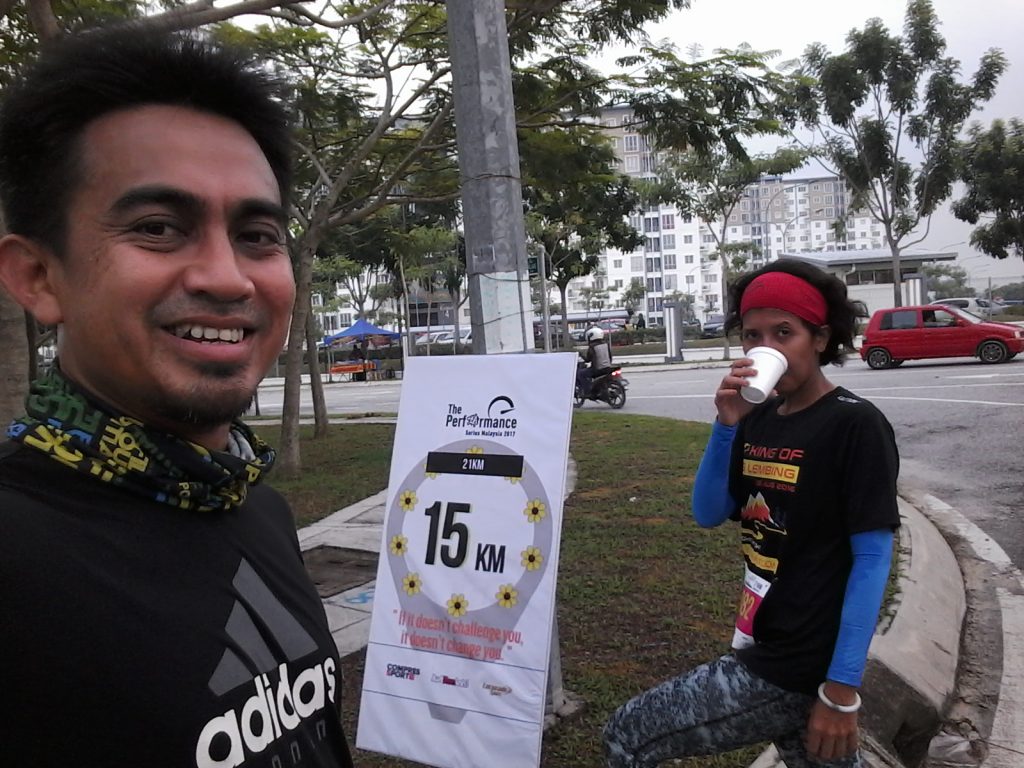 Along the way, the attentive marshals and cheerful volunteers kept our spirits up, always cheering and projecting positive vibes to all the runners.

At this moment, I’ve totally forgotten that I was running with (uncomfortably at first) just one eye clear vision.

Thank goodness I didn’t run into any water stations or runners! 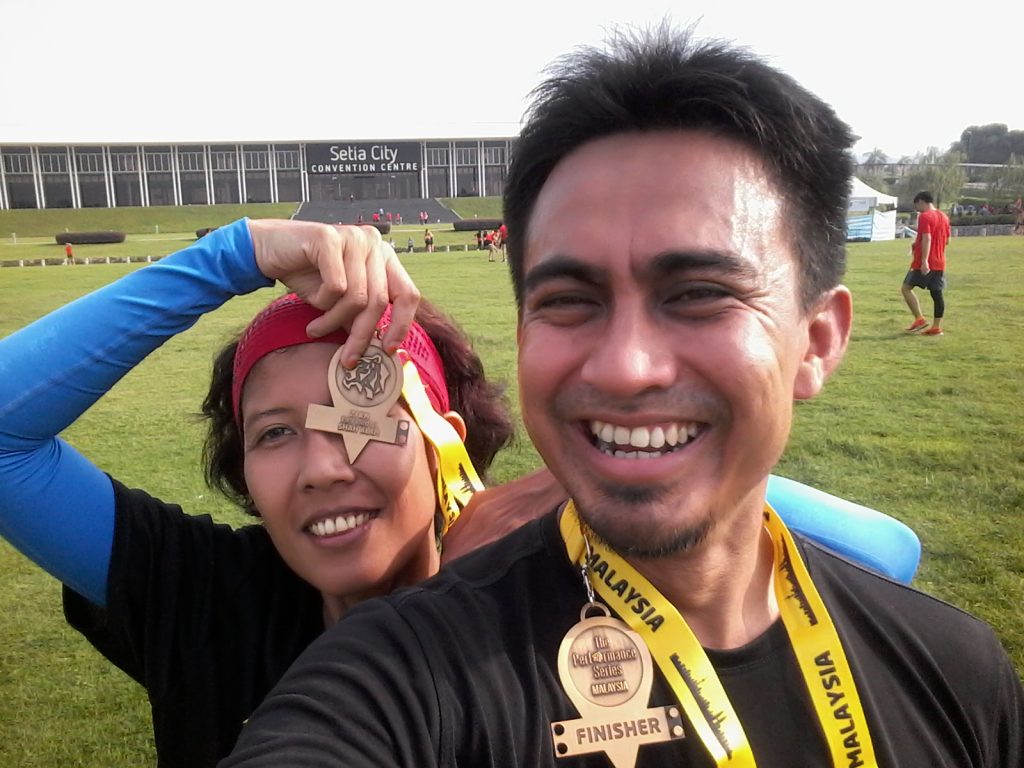 Both The Hubba and I agreed upon running at a very comfortable, chit-chatting pace – not pushing nor taxing ourselves.

After all, “it’s not about the destination that matters; it’s about the journey”, right?

We just wanted to enjoy each other’s company, without thinking about anything else in the world.

It was just, the two of us.

In the end, we got to the finish line at 2 hours and 35 minutes, picking up our treats, t-shirts and medals.

Thank you justrunlah.com for the wonderful complimentary slot – it might be mundane to others, but to The Hubba and me, it was an extraordinary run indeed. 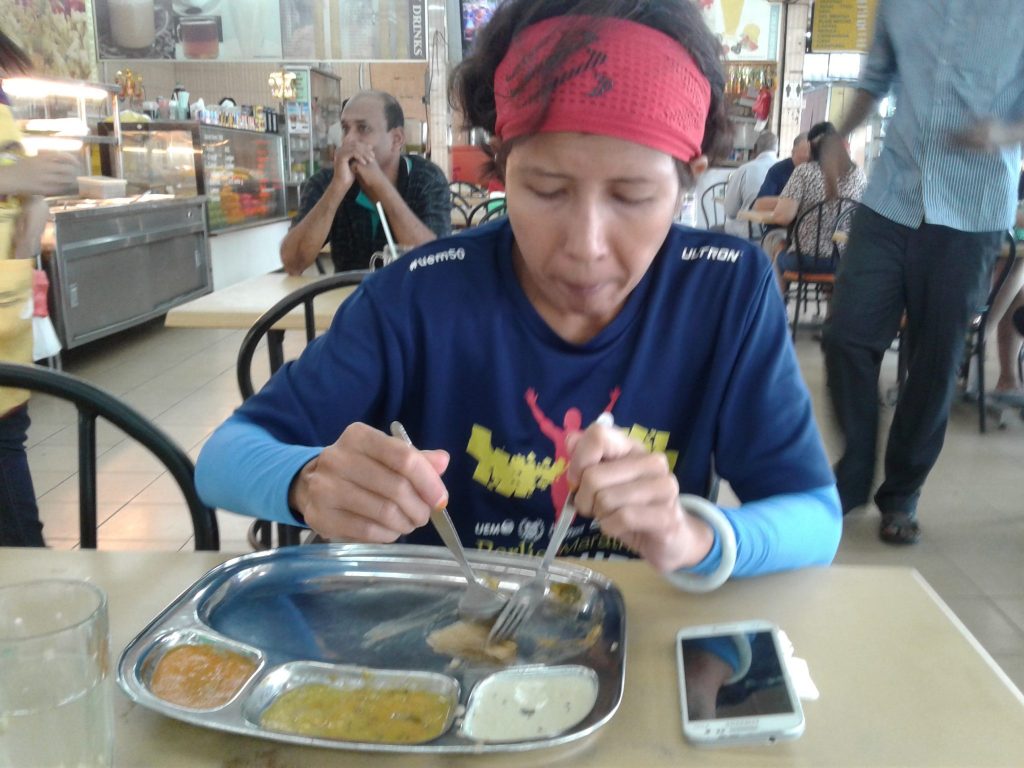 I guess, some dreams do come true.

That, and having thosai as breakfast after the run.