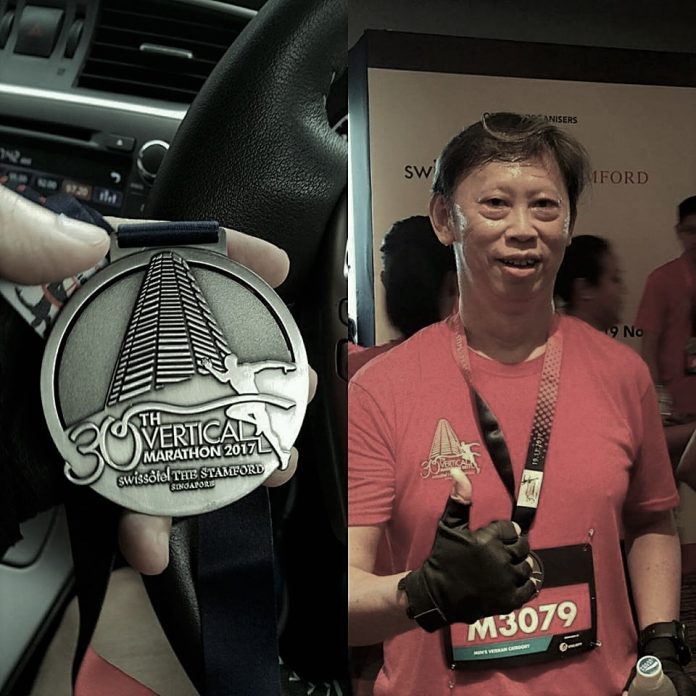 On May 24th of 2015, the year which I got rather active physically – where I attempted them all: half marathons to full, aquathlons, Spartan races, OCBC Cycle, I also did my first official vertical marathon (National Vertical Marathon it was called then,  63 storeys) because I wanted to accompany my son.  But it turned out that as we were in different category, we had very different starting times – a couple of hours’ differences.  As memory faded, I forgot how hard it was to run up vs the usual horizontal plane and also mistook that I had climbed 40 plus storeys !

Recently again, on the last day of early bird, I signed up for the Swissotel Vertical Marathon (SVM2017).  I did this partially because I had to skip the Spartan Beast Race due to my back injury.  And I felt there was a vacuum.   The other motivation was that I thought I would really like to see the Sunrise from the rooftop and dedicate this marathon to my father who would have turned 82 years old just 3 days before this event.  As it was, by coincidence, I also dedicated the 2015 vertical marathon in his memory because he had left us 4 years then on that very date, 24th May.

Overview of Event before I dive into a narrative of sorts.

Race collection was pretty much a breeze – took a few minutes especially in contrast to YOLO run then, the week before.  I have yet to blog on YOLO Run because I was awaiting some information back from the organizer – will follow up later.  In fact, that day, I finished the YOLO Run very early, and I decided to stick around the area till about 10 am to collect the race pack from Swissotel itself.  I walked from the race site to the hotel and sat in the lounge there for the volunteers to get ready.

One volunteer suddenly talked to me.  Turned out that she was an ex-colleague.  Somehow she had seen me several times during race pack collection and recognized me from my old working place.  She made the observation that I was not active in running while working there.  I told her she was right.  I didn’t even like running then actually.  She was soon called to man the ‘counters’ and after waiting for a few minutes, I joined the queue for the race pack.  After collecting the race pack, I waved to the lady and left, thinking I do have a lot of volunteer friends from the races these days.

I thought the back pack and the bright red tee from CompressSport was rather attractive in this race pack.

I woke up at 5.00 am, attempting to sleep earlier the night before.  As usual I wasn’t very successful.  Still, I think I was getting used to race day routine.  Looking at my schedule, for every weekend since October 7th, it was always a race day except for one week where I took a break and first week where there were two races.

I reached the venue early and the first category was getting ready for flag off at 6:15 am.  The first group was non-competitive and meant for those who wanted to go up to catch the sunrise.  The second category was the Veteran Men (ie my cat), to be flagged off at 6:50 am.  So I thought it was good that they were giving priority to veteran to have a go at catching the much harped upon sight at the rooftop.

After almost 3/4 of the first cat had gone off (in waves of 4 and subsequently bigger groups), the DJ said due to lightning warning, there was a possibility that the race would end on the 69th storey instead.  I had heard no thunder nor saw any lightning nor any dark clouds nor experienced droplets of rain falling on my head.  She also said, just a maybe so perhaps it would still be clear.  I didn’t think too much of it because the weather was pretty good.

I had brought a pair of old gloves to protect my hands because I had injured my hand while pulling on the rails of the stairs.  Looking back, I had only trained by climbing stairs 5 times before this actual race.  The first 4 times were between 10 to 22 storeys, and the 5th was up to 44 storeys and this was over a span of about 4 weeks from mid October, so about once or twice a week at most.  Most of the activities the last 43 days had been spent on running.

I was in the 6th row of 4 persons when our category were flagged off.  Blare, the trumpet went off.  I ran a short stretch and then up the first flight of stairs.  I used my hands to pull myself up as I covered two steps at a time.  Think on the 7th storey or thereabouts, we ran a very short landing and then up the stairs again.  Reached 10th storey, climbed, climbed then I saw 20th storey. 30th storey, I was feeling the heavy thumping of the heart against the rib cage.  Breathe..breathe.. then I looked up and it was only 34th storey, not 40th.  Continue to go up, breathe, move, breathe, move.  40th storey, 45th…

Suddenly it was 60th storey… but I was already almost bent over, and breathing very hard, though I was sensing that the finish is close by and getting ready to ‘sprint’ with last efforts.  63rd, 65th… then I thought I was just at 68 or 69th, and the volunteers were standing on the stairs leading up and pointing to their left.  So I started to walk quickly and then bang again.. (almost like YOLO 7 km for 10 km race).  Finish at 69th storey – sudden death !  Lightning alert so race stopped at 69th storey.  No rooftop.  I had carried my smartphone in vain.  BIG Disappointment in an otherwise well organized race.   A volunteer hung the medal over my neck.  I forgot to stop my watch so I pressed the button too.

I joined the small crowd which was there and walked around briskly to look for the window views.  Didn’t look like it was raining out there.  Anyway, I took a few photos and then caught my breath again.  I took the Pocari Sweat and finished a bottle.  I took another one after walking briskly again.  Then it was time to take the lift and go down.

Then I heard a young man saying to an old man:’Wah, if you can do it, then we have to be able to do it too.’  The old man asked ‘Why ?’.  There was an uncomfortable pause.  They were behind me so I didn’t turn around.  The old man answered himself, ‘Oh, because of my age ?’.  I walked into the lift and turned around to look.  Guessed the young man was probably mid 30s.  He said, ‘Yes, you are a good example so the young should follow.’  Okay, at least recovered a bit with that.

I thought to myself, sometimes there is an art to a conversation and you can’t just blurt out whatever you think of first hand.  Anyway, somehow it ended up I was walking with the older man down the escalators.  He asked me if it was my first time so I said it was first time for Swissotel and he said he had done it a number of times.  He seemed to be someone who exercised very actively.  He was 81 years old, proudly saying he was born in 1936.  That was one year after my father’s.  I just said so.  After he asked how is my father, I explained my father had passed away already.  Oh, sorry.. it’s ok.

We then continued to talk about ways of keeping active.  I asked if there was a chance that he was the oldest in this race.  He said he wasn’t sure.  He was eager to check his results and I told him that it was announced that the results would be available within 2 days.  We saw the information counter on the ground floor, and I suggested that he might want to check with them too.  The volunteer told him that it would be available within a day.

We parted and I left for home.  I thought it was still early so I went for another 2 km run.  But realized that the climb did end up with me quite spent as I wasn’t able to keep my usual pace.  So in my ongoing challenge to complete running 500 km in 86 days for charity as a SCS athlete, I’m currently at 239.25 km on the 44th day.  Running slightly behind in terms of average per day if I were to run every day.  Will catch up later as I still have two more races to go, the last one being the full marathon in December.

(Afternote :  I had looked up my ‘records’ of the last vertical marathon after the race.  Somehow at the back of my mind, I thought I had done only 40+ storeys in the National Vertical Marathon at One Raffles Place Building – it was in fact 63 storeys and I had done that in more than 18 minutes.  This time round it was 69 storeys and I had done it in 16:32 min, unofficial record for now ! So it is possible to improve even as you get older each year if you put your heart to it.  Would have been nice to be able to say a belated ‘Happy Birthday’ to my dad if he was around still !)