This year Singapore Airlines is celebrating her 70th Anniversary and the SIA Charity Run is one of the charity activities being organized to raise funds for the less fortunate and all proceeds from the run will be donated to the Community Chest of Singapore. What greater way is there than to run and at the same time, doing a good cause for charity! The last time such a charity run that took place was back in 2014 at the F1 Pit Building. There are various categories in this year’s run and that includes the 10KM Competitive Run, the 10KM Corporate Challenge and the 5KM Fun Run. Also for the first time, a 3KM Wheelathon to host the physically challenged competitors is also introduced as a special category to encourage inclusiveness.

It was a humid early Sunday morning on 8 October 2017. The rain earlier the night before did not help to cool down the air temperature. I arrived at 6.25am and there were already “passengers” (runners) which stood outside the “boarding gates” all getting ready to board their flights. Some were seen doing their pre-flight checks (warm-ups) and engines were already raving on the tarmac ready for take off on the runway once air traffic clearance has been given (flag-off). The “boarding gates” were soon opened and the “passengers” enthusiastically made their way to the start pen that was located near to the Singapore Flyer. The Estimated Time of Departure (ETD) for the flight was 7.00am local time (GMT +8). At 6.45am, the “Final Call for Departure” was announced and the runners for the 10KM categories both competitive and corporate were ready and seen “taxiing” to the runway threshold (start pen).

There were a total of 3,234 runners who took part in this year’s 10KM run. After some warm-ups by the good people of Triple Fit, the run for the 10KM categories was finally flagged off at 7am sharp. One by one, the runners took off their flights with pride and departed the runway soaring the morning skies. V1! I too, cruised passed the runway and airborne with speed for my 10KM run. 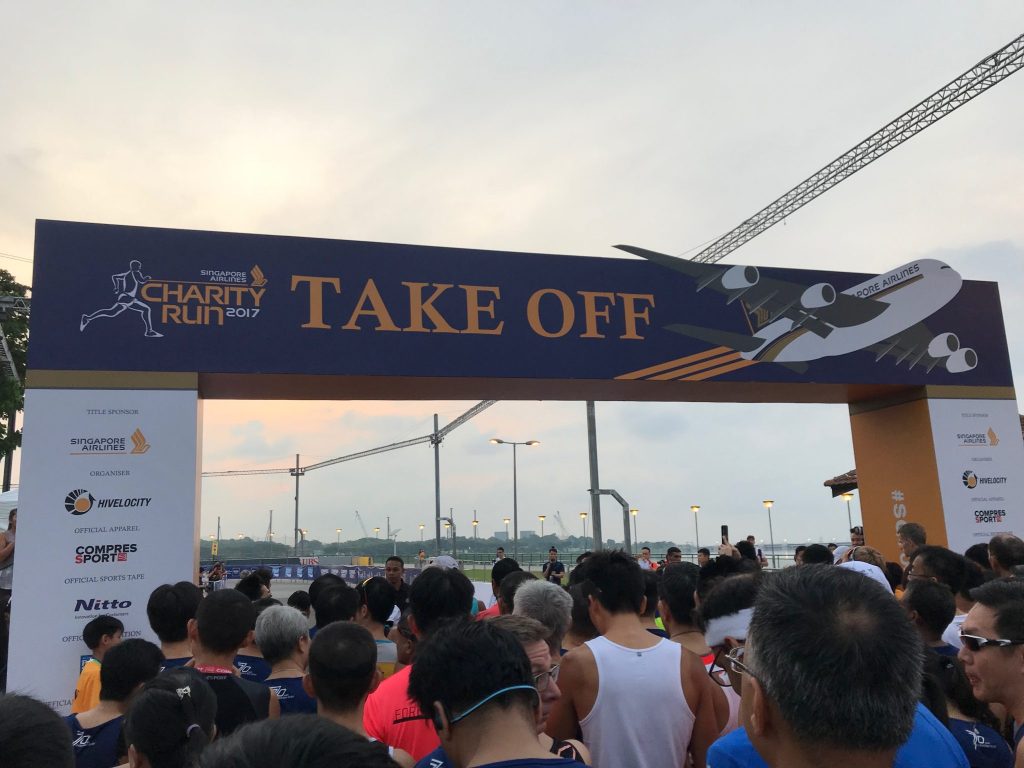 The flight plan for the 10KM run that took us to some of Singapore’s scenic route and landmarks was as follows: 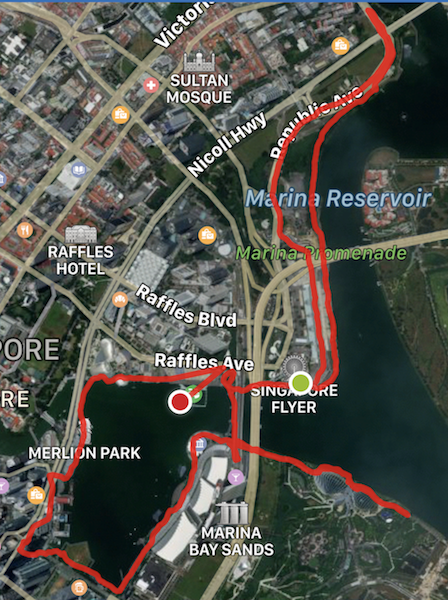 It was a smooth start to the run under Visual Meteorological Conditions and the weather was getting warm and humid. Suddenly before the halfway mark of the run, the skies turned dark and distance thunders could also be heard too. Soon drizzles started falling on our heads and the droplets got bigger although it was not a heavy downpour. Many runners would welcome the rain as it actually did cool us down quite a bit although the ground was wet and slippery. Even though the skies had turned dark and rain poured, there was no necessity to switch and fly under Instrument Meteorological Conditions as visibility was still good and we have visual contact with the other runners.

The marshallers did a fantastic job, as they were significantly alert and constantly announcing to the runners where to turn during the run even there was signage prominently placed. There were also 3 hydration points along the 10KM route and I only stopped by the 2nd hydration point to “refuel” myself.

Soon before I completed my run, the skies cleared and the rain stopped. At my last 1KM mark, I hastened my pace and sped towards the finishing line hoping to do my personal best for this run. I “flew” passed the Merlion Park, Jubilee Bridge and the Esplanade and had sight of the runway before reaching my final destination: The Float @ Marina Bay. “50…40…30…20…10…Retard, retard, retard.” My flight has finally touched down the runway and landed uneventfully whilst the “throttles were set to idle and the engines in reverse trust” to slow down my pace after passing through the finishing line. I “taxied” back to the “apron” (collection point) to receive my “wings” (finisher medal) and other entitlements that comprised of a bottle of Pocari Sweat, a bottle of water and a banana for me to “refuel and reload.” Although I did not do my personal best for this run that was slightly passed an hour, generally I was still feeling great and like all the other runners, I have proudly earned my “wings.” 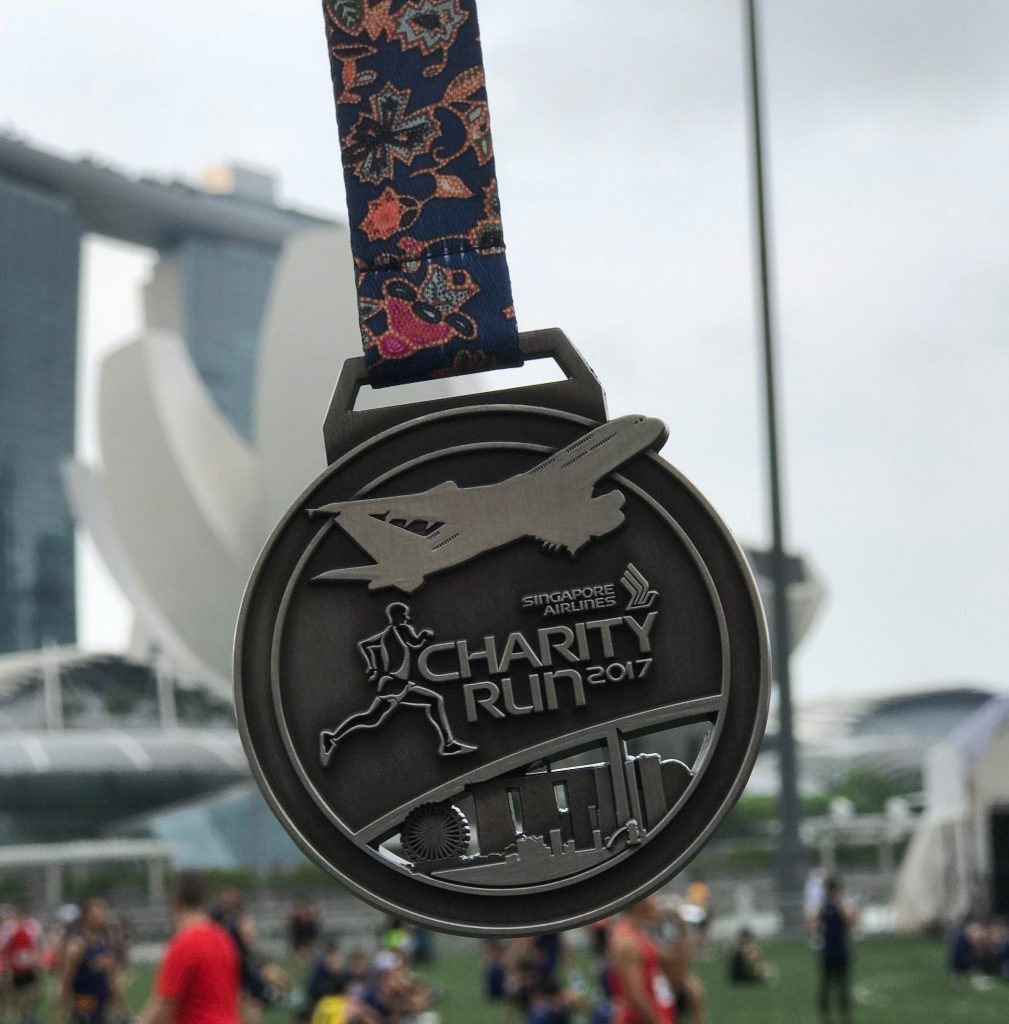 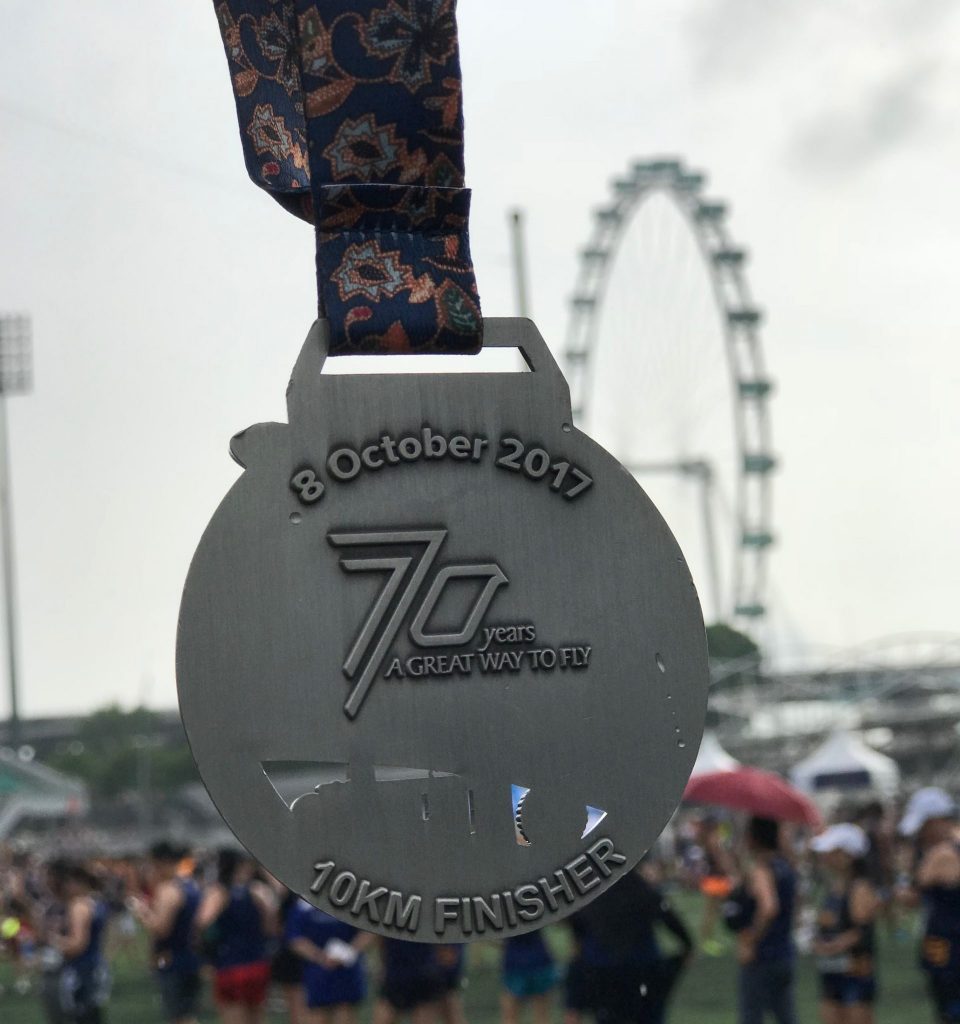 At the race village, there was a stage performance by the SIA Cabin Crew Dance Club & Music Society that gave the audience a great song and dance performance and photo opportunities for the runners to take pictures with our very own Singapore Girls donned in their famous Sarong Kebayas together with the pilots who ensure that we are in safe hands every time we fly with them. There was also a booth that gave out free mini Cornettos sponsored by American Express as well. The drizzle returned back shortly but luckily, it only lasted for a few minutes. 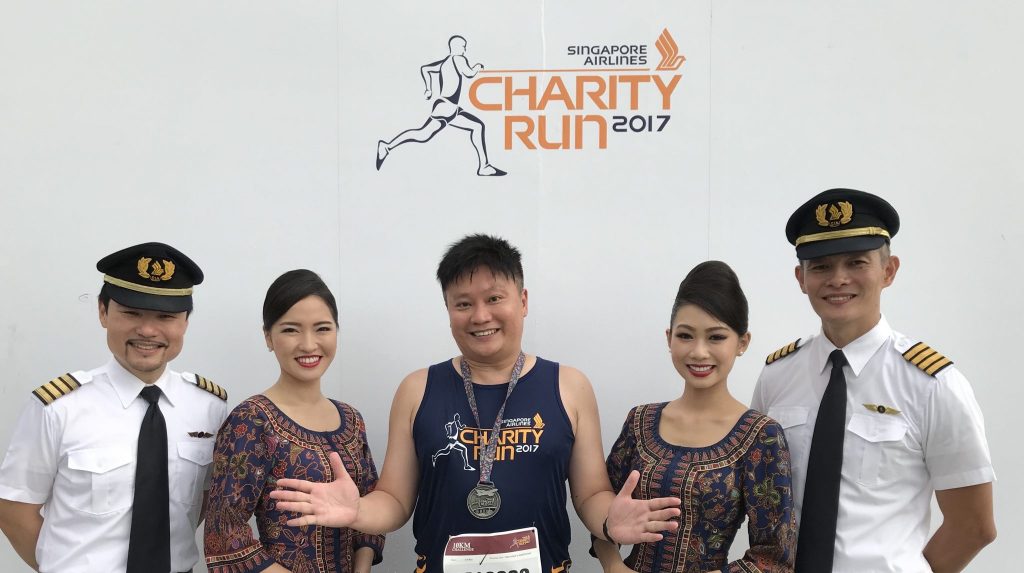 Many runners like myself stayed back after the race, as we were all eagerly waiting for the lucky draw to commence. I am pretty sure that this was the highlight of the event day as the top 3 prizes were respectively a pair of Singapore Airlines Business Class tickets, a pair of SilkAir Business Class tickets and a pair of ScootBiz tickets to any destination of the prizewinners’ choice. There was also the early bird lucky draw and the prize was a pair of SilkAir Business Class tickets to any SilkAir destination. Before the lucky draw commences, there were the prize presentations to the top 3 winners for the 10KM Competitive (Men/Women), 10KM Corporate Challenge as well as the Best Dressed Prize. After these prizes were given out came the lucky draw prizes. However Lady Luck did not smile on me and I just have to wish myself a better luck next time 🙂 Anyway, I congratulate all the winners who have won for themselves the air tickets!

The event day for the race ended at 9.40am and by then, the sun was out again in full glory and shining his rays on us. Overall, the SIA Charity Run was a great event that was well organized. Singapore Airlines – A Great Way To Fly! Let’s Run and Soar Together!