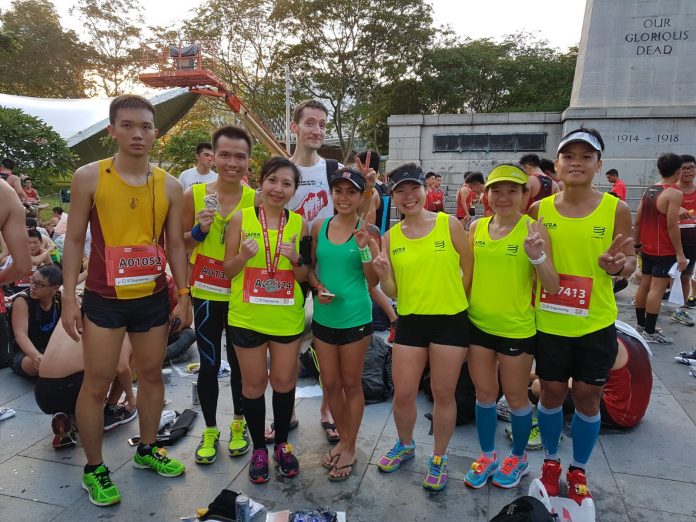 The ultimate laziness is actually not taking Grab than buying shuttle bus tickets to the race venue. This time, I had a staycation! Decided on Swissotel The Stamford because it’s just beside the Padang, the race village also the start and end is just near by 😆 And I got an awesome view from the balcony of the hotel room 😍 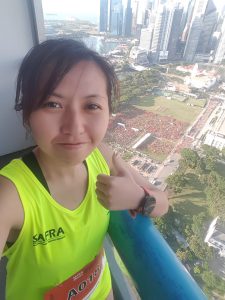 Some people will think siao izzit? Waste money got house don’t want stay but pay a few hundreds to stay for a night. But trust me, it’s super shiok! No need to wake up super early on race day and after race can immediately head back to shower 😍 Staycation for races is actually also becoming a trend already 😁

There’s is many different categories for the event. The half marathon, 10km and 5km fun run and familes for life 800m challenge which I see so many cute little kids and sweet families participating 😍 I’m running the half marathon with a crazy flag off time super early at 4.30am, the struggle to wake up is real 😂 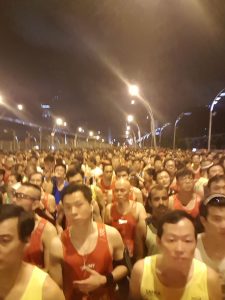 As expected, it’s a people mountain people sea running event 😂 It’s not a good run today as I walk a lot for the run 😭 Flag off was delayed for about 10 mins and while I was waiting to enter the start pen, I start to feel giddy. Maybe there’s too much crowd, maybe it’s too humid or maybe because of anaemia. But I was still hopeful that I can follow the 2hour pacers so that I could get a personal best from what I achieved in 2XU this April of 2hr 6mins. End up, I’m just glad enough to finish seconds before the 2hr 30mins pacers or blessed enough to complete the run because at one point I even wonder will this be my first Did Not Finish run?

2 hours pacers was too fast too follow since the beginning. Which I thought their average speed would be about 5’40 pace, but they were running too fast at the beginning and many of my friends were complaining too that they are running too fast which my first 4km was an average pace of 5’15. Till I started feeling a little bit giddy and started walking at about 5km and decided I should just run my own instead 😂 I don’t want to end up collapsing or hurt myself or trouble any medic. 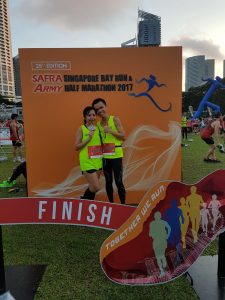 Willis is running together with me as usual being the supportive boyfriend where at first I zoomed off chasing the 2hrs pacers at first while I “abandoned”him behind 🤣 But he caught up with me soon after I dropped out from chasing the pacers and run with me although he could chiong. When we reached East Coast Park he went to the toilet and tell me to run first as he will catch up soon. He was held up in the queue at the toilet and I ran quite a while by myself before he catch up with me again at the last few km 😊

I was drench with sweat entirely. Seriously very drenched like it had rained heavily during the run, I squeezed the sweat out of my singlet and shorts and wonder how many calories I burned or how many kg lighter I will be at the end of the run 😆 The irritating part is I feel my socks and shoes super wet since at about 10km.

At certain part of the run it’s very crowded. Was surrounded by people front, back, left and right but luckily there’s no human traffic jam for me. At the last part of the run, there’s many hydration points. Almost at every 1 or 2km away. 100plus is cold and shiok as always but why the mineral water at runs cannot also provide cold one 😩

The 2hrs 20 mins pacers were really doing a good job and very encouraging, I really had wanted to follow them but guess I’m not that determined since I can’t get a PB timing already, just completing is good enough already. Wonder if the guy pacer was the one that I followed in 2015 Standard Chartered Marathon as he is just as good, he was motivating runners along the way, saying things like don’t walk, follow him to finish in 2 hrs 20 mins, really 👍🏻 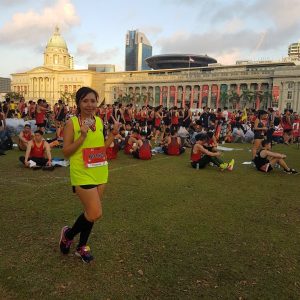 At the last few km I spotted many familiar runners, it’s nice at that point we were offering each other encouraging words to persevere to the end of the run. 21km is very fierce and no mean feat. At the last few hundred metres before the finishing line, even got sexy belly dancers to motivate runners 😍 After the run I just want to leave immediately the people mountain people sea race village 😨 Went McDonald’s for breakfast but no appetite and just gulp down a large Iced Milo 😋 Congratulations all runners, rest well and hydrate yourself! Now I look at my dirty clothes and shoes and wonder how come they cannot miraculously clean themselves 😩 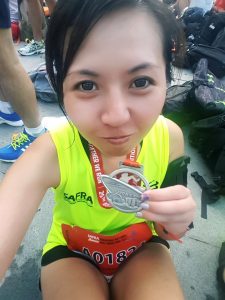