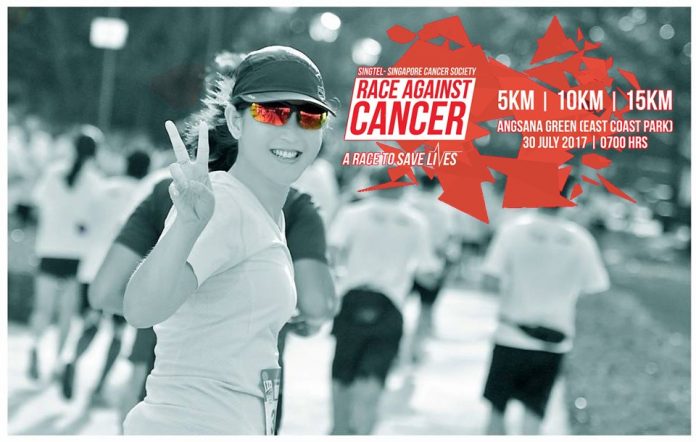 Cancer refers to a group of diseases. Although there are over 100 different types of cancer, all cancers are characterised by abnormal cell growth. If left untreated, this disease can lead to death. In Singapore, about 37 people are diagnosed with cancer every day and the number of cancer cases is on the rise according to the statistics of the Singapore Cancer Registry, Annual Report 2015.

A big thank you to my friend, Jennifer, who helped collect the race pack for me. When I opened the race pack to check out the contents, I was pleasantly surprised. It did not just have your typical race event tee and brochures; it had a few snacks like a box of Hello Panda biscuits, 2 packets of oat biscuits, a bottle of Pokka Green tea and a micro-fibre cleaning cloth sponsored by SingTel. It was a very nice race pack as compared to other run events. I’m glad that RAC had generous sponsors. 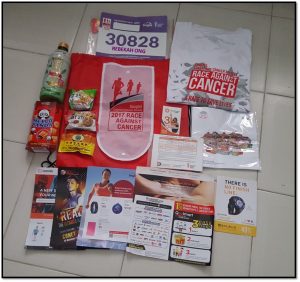 For me, not only was this first time participating in the RAC event but it was also my first time attending a run event at East Coast Park (ECP). Since the event flag-off was at 07:30hrs, Jennifer and I had decided to try Grab Hitch to get to the event site. We were successful in securing a Grab Hitch! Though there weren’t any GRAB X RAC promotions, we were entitled to a first time user’s discount which made our trip to the event site very reasonable. 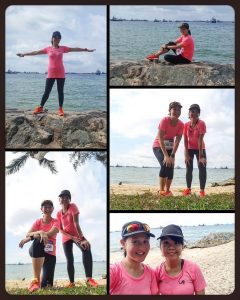 Above: Taking some photos at East Coast Park Beach Area.

We arrived at the race site around 07:05hrs. The race site was bustling with lots of activities. There were no queues at the toilets. Jennifer and I decided to take a few photos around the event site as it was still early. The 15KM runners were already in the race pen and were about to be flag-off.  When the Guest-Of-Honour (GOH) arrived, the emcee also invited some children dressed up as superheroes up onto the stage. The children in superhero costumes represent the cancer patient caregivers who are always there for them. To the Cancer patients, their caregivers were their Superheroes! The 15KM flag-off around 07:15hrs. 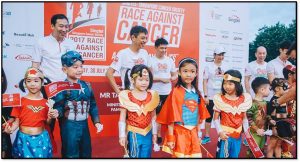 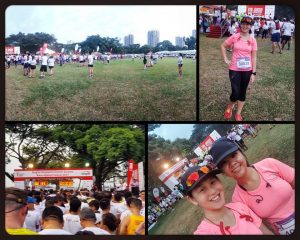 Above: Snapping some pre-race photos at the race event site

As I started my run, I noticed that the running paths were a bit narrow but it was not too congested except at the beginning. The congestion quickly cleared somewhere near the 2KM mark and thereafter it was clear. I was quickly drawn in by the nice beach scenery and the activities that were going on by the beach. Familiar sights like the famous ECP MacDonalds and Parkway Parade could be seen while running along the route. I always like a change in route as it takes away the monotony of running. 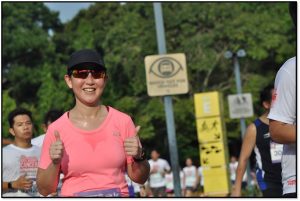 It was a pretty simple and flat route U-turning at the 5KM mark for the 10 KM participants. I was pretty happy to maintain my 07:00min pace for most of my run. Hydration points were located roughly at every 2KM along the route supplying mainly water. Distance markers were place clearly along the route. It was a really nice run especially with a nice morning breeze blowing. 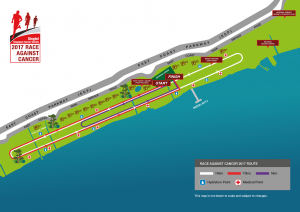 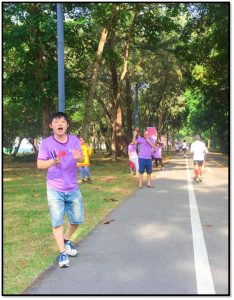 What I thought stood out for RAC were the ever enthusiastic volunteer cheer squads along the way giving encouragement to all the runners that passed by. They were very easy to spot as they were holding up signs with encouraging words or were blowing party blowers or making sounds with clappers! These volunteers deserve two thumbs up as they really gave me the push to keep running on.

I completed the race with an official time of 1hr 11min 13secs. Official results were released two days after the event. I collected my Finisher entitlements which included my 10KM Finisher medal, a banana, a can of Pokka PLENISH Sportswater, a bottle of mineral water and a bottle of Yakult! I was delighted to receive those goodies as I was a bit hungry. Once completed, I went to find my friends for the usual catch-up and photos. There were lots of photo opportunities at the race site but there were long queues and I decided to skip those. 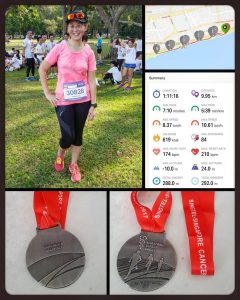 Above: Happy to have completed the race. Check out this year finisher medal and my un-offical timing

RAC was definitely a success! Singtel, the title sponsor raised more than $25,000 in total for Singapore Cancer Society. RAC is surely making my list of favourite run events for the year 2017. It was well organised and I definitely had fun running for a cause! Kudos to the organisers on doing such a fantastic job! Till my next write-up! Take care everyone! 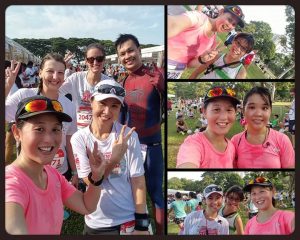