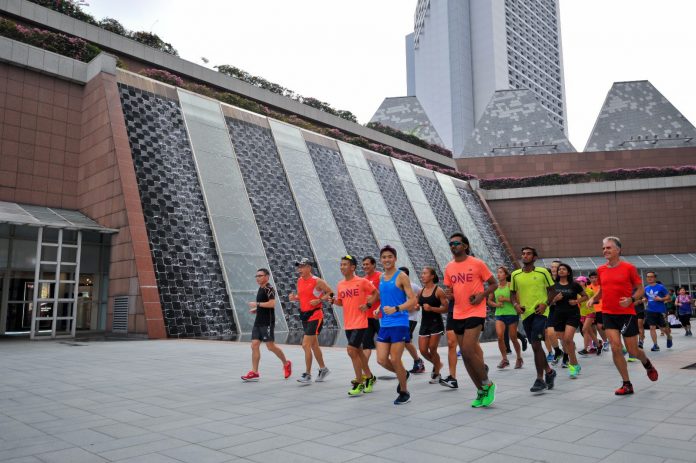 Ever wonder what preparation is needed to run a good race? For me, I never really thought much about it but after attending last weekend’s (8 July 2017) run clinic; I have to say that I did learn a lot from the tips given. The clinic was conducted by Mok Ying Ren who is managed by ONEAthlete and also a two-time SEA Games gold medalist. 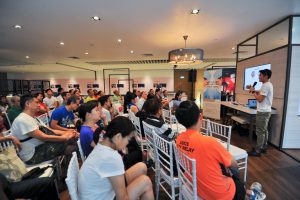 During the clinic; Mok shared his experiences running the SEA Games Marathon 2013 and also his 1-year training stint with 3-time Olympian Lee Troop in Boulder. He gave us some behind-the-scene insights and the preparation he had to do before actual race day. He also shared race day execution tips which are especially useful to participants who are running in this week’s Straits Times Run in the City (16 July 2017). 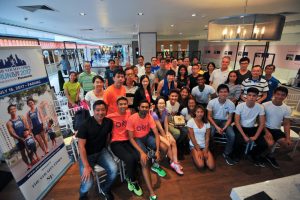 (A) TIPS ON RACE DAY MORNING

For race day morning Mok emphasised the importance of having breakfast by using simplified glycaemic index (GI) charts. The GI index is a number associated with a particular type of food that indicates the food’s effect on a person’s blood glucose level.  Mok explained that glucose levels in our body go down while we sleep because our bodies still consume energy. As such, there is a need to eat breakfast to refuel our bodies before a race. Foods that are low in GI like whole grain bread was suggested.

Caffeine was also one of the things he noted that would be helpful. Having a little caffeine can boost performance on race day and helps you to stay awake. He also illustrated how much caffeine is enough with some simple calculation.

Mok also touched on warming up before a race. For longer races such as half marathons or full marathons, he noted that light or no warm up is needed – instead start the race slowly at an easy pace and use that as your warm-up. However, for a short race such as the 5km or 10km run, it is important to do warm-up like dynamic stretches.

(B) TIPS ON RACE STRATEGY

In the race strategy part of Mok’s presentation, topics like pacing, nutrition and hydration were covered. I learnt different pacing strategies: positive splits, negative splits and even splits. Mok used different scenarios to highlight the differences between these three types of splits. I think I would try out the even splits in my next race.

As for nutrition, I learnt that it’s good to maintain a good balance of low and high GI foods. As mentioned earlier in part (A), pre-race meals can be low GI food. During a race, however, refuelling should be done with high GI foods such as sports drinks and power gels which are absorbed by the body faster.

Lastly, for race hydration, I learnt that drinking early in the race is recommended but only drink to quench your thirst and not to over-drink. Over-hydration is dangerous as it will cause body salts to get diluted and sodium levels to drop which will cause lethargy, fainting or loss of consciousness. 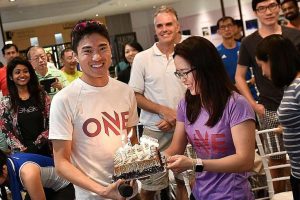 I really enjoyed the presentation by Mok and will definitely try his tips in my next race. After the presentation, Mok’s manager and co-founder of ONE Management SG, Jed Senthil introduced the runONE team and the athletes managed by ONEAthlete. He also did a short presentation on ONE, followed by a “corporate” video.

Little did we know that video was actually a surprise video of birthday wishes to Mok from family & friends, sponsors & partners who have been supporting Mok! To top it off, a birthday cake was brought in and Happy Birthday was sung to celebrate Mok’s birthday. The surprised look on Mok’s face was priceless.

The second part of the clinic was a running session with Mok! Before the run, we had a short break and got to see familiar faces from the runONE community. I had the privilege of having met some members of the runONE Community when I participated in the Baton Run in May this year. It was really nice catching up with them! You can read my write-up on the Baton Run here. 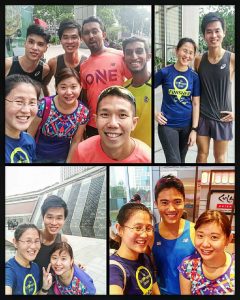 The running session started with simple warm-up exercises led by Mok. This was then followed by a short 20-min easy run. Unfortunately, the 20-min run had to be shortened because of the ongoing NDP rehearsals – it was quite a sight seeing the colourful NDP contingents forming up and the army tanks getting ready to enter the Floating Platform! We covered a total of 1.8km and the session was concluded with some cool-down stretches and other core strengthening exercises. 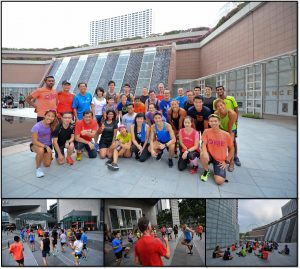 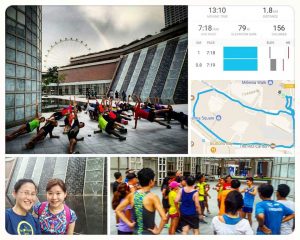 Overall I really enjoyed the run clinic! I definitely learnt loads from both the sharing and running session with Mok. Big thanks to Mok for sharing these race day execution tips! And to the friends from runONE & ONEAthlete, it was nice seeing you guys again! I’m glad that we got to catch up. Hope to see you all at future races!