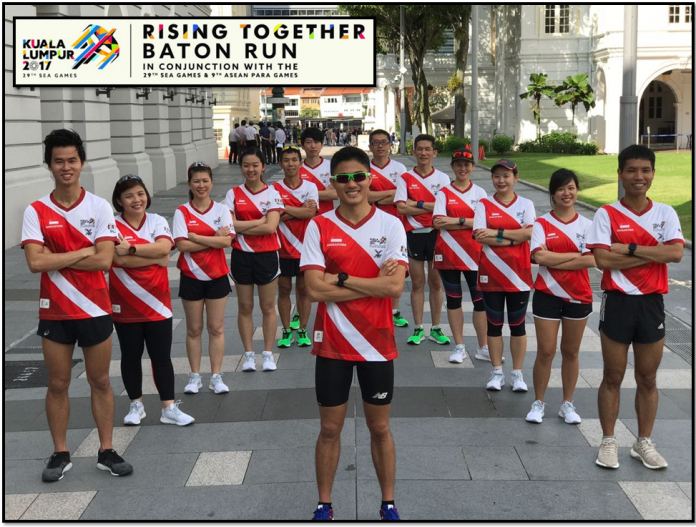 Mok Ying Ren, Soh Hua Qun and Evan Chee are just some of the familiar names that you would hear in the local running scene! These are some of Singapore’s best athletes/ running elites and I had an amazing opportunity last weekend, 13 May 2017, to participate in the Singapore leg of the “Rising Together – Baton Run” with them and the RunONE Community!

Now some of you may be wondering what is RunONE. RunONE aims to bring running to everyone. They are also the training partner for this year’s Straits Times Run. RunONE is co-founded by Dr Mok Ying Ren and Jed Senthil. You can find out more about them here.

Singapore is the penultimate leg in the relay circuit, which has passed through the capital cities of nine other Southeast Asian countries since March. The baton relay will switch to a torch relay and continue through all the Malaysian states before concluding in Kuala Lumpur on 19 August for the SEA Games opening ceremony 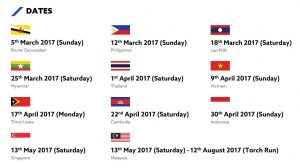 The Singapore leg of the “Rising Together – Baton Run” had Minister for Culture, Community and Youth Grace Fu and Malaysian Minister of Youth and Sports Khairy Jamaluddin with other participants such as Team Singapore athletes, Singapore Sports School student-athletes and Team Nila volunteers join in the Baton relay.  It will also feature various notable athletes and sports personalities including gymnast Lim Heem Wei, badminton player Ronald Susilo and swimmers Ang Peng Siong and Mark Chay. The Baton Run was scheduled to pass through several iconic Singapore landmarks such as the Youth Olympic Park, Marina Bay Sands, The Merlion and the Sir Stamford Raffles Statue. 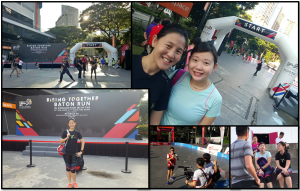 My friend, Cheng Yee and I arrived at SCAPE Youth Park bright and early to meet up with the rest of the group and the team from RunOne! It was nice to see everyone excited and ready up for the event! This being a national event,  somehow felt like we were participating in a National Day Parade segment! The RunONE team introduced themselves and gave a short briefing on the event day line-up. Once the briefing was done, we went to change into “Rising Together” event tee! I really liked the design of the event tee though it was slightly too big for me. We took some group photos before hopping onto the shuttle bus which took us to our START point. 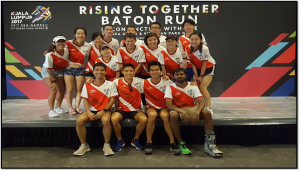 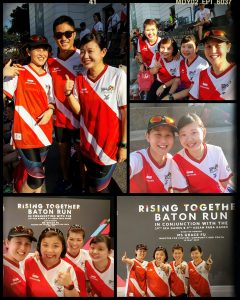 The total distance for the Singapore leg of the “Rising Together – Baton Run” leg covered 16.5 KM and there were nine checkpoints. We super excited to be on Mok Ying Ren’s Team which was the 2nd last checkpoint which will start from the Arts House and end at the Somerset Skate Park. 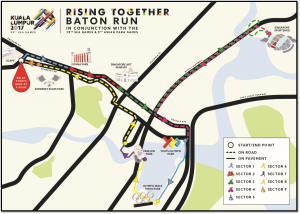 [Route Map for Singapore leg of the “Rising Together – Baton Run”]

Getting to know the Team

While waiting for the baton to arrive, we had the chance to interact with the team from RunOne. It was interesting hearing the athletes talk about managing their training while balancing work and life. It really takes lots of hard work and discipline to do what they do. I salute them for their commitment on going the distance. They also talked about their upcoming events and one of it was the Bangkok Midnight Marathon 2017 happening this weekend on 20 May. Evan Chee and Soh Hua Qun would be representing Singapore in the event. 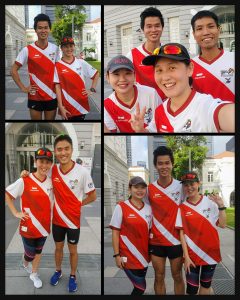 Time to Run As One

As the time drew nearer to the arrival of the baton arriving, we had to get into formation. The group was led by none other than Dr Mok Ying Ren (double gold medalist in 2007 and 2013 Games), and then followed by the athletes managed by RunONE , Evan Chee and Soh Hua Qun. The rest of us formed up behind them. This is the formation that we had to keep while running to the next checkpoint.

Minister Grace Fu and her contingent soon arrived and the baton was passed to Dr Mok. Off we started out journey to the Somerset Skate Park. Truth be told, I was a tad nervous as I’m not a fast runner and I’m on the team which is led by some of Singapore best runners. I was worried that I could not keep up but that all that changed when we started running. During the run, all of us were chatting with each other and it was enjoyable to run because the group encouraged one another to keep going. My nerves just dissipated. The pace that we were running at was slightly faster than my normal but since it’s a short distance, I was still enjoying the whole experience. 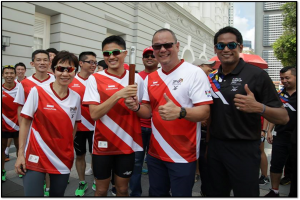 We ran past places like Raffles City Shopping Center, Singapore Management University (SMU), Istana Park which you never would during a normal day/event. It was a surreal feeling to have the police mobile squad driving alongside the team and to have them stop traffic so that we can make our way to the Somerset Skate Park. It felt like we owned the road and you can run freely. It was a great feeling also to have people along the route cheering us on as we made our way to the other checkpoint. Talk about being the centre of attention! 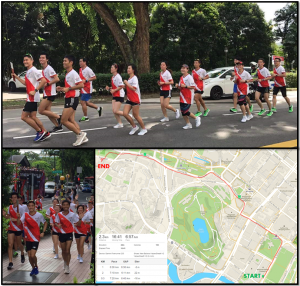 We ran for about 2.5 KM before we reached the Somerset Skate Park. Dr Mok handed over the baton to Rio Paralympic Games triple gold medalist in swimming, Yip Pin Xiu, who then proceeded to complete the 16.5km run. It was an awesome feeling completing the short but fun run.  All of us headed back to the SCAPE Youth Park for the closing of the event. 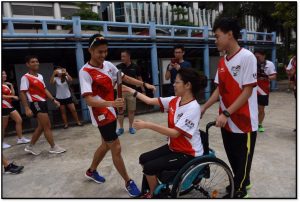 You can click here for the press release on the Singapore leg of the “Rising Together – Baton Run”.

What a Saturday! Big thanks to RunOne for the opportunity! This experience would definitely a highlight of 2017 for me and it would be engraved in my memory for a very long time. Not only did I get a once-in-a-lifetime experience running alongside a team of elite runners but at the same time Run together as One to represent and promote Singapore as part of the SEA Games. Till my next write-up! Let’s Run as One! 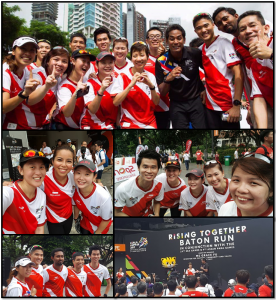