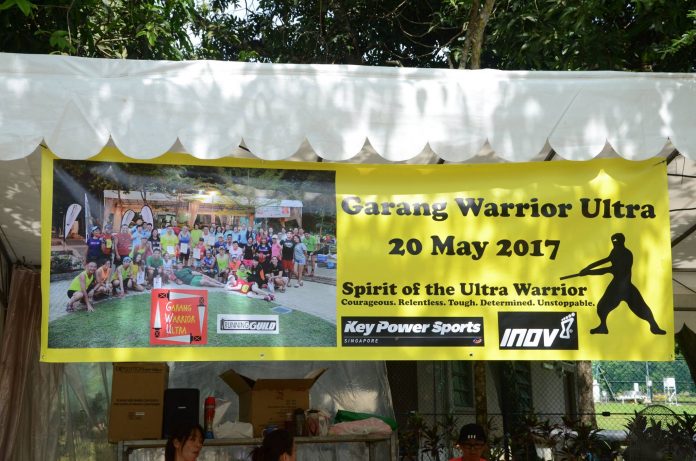 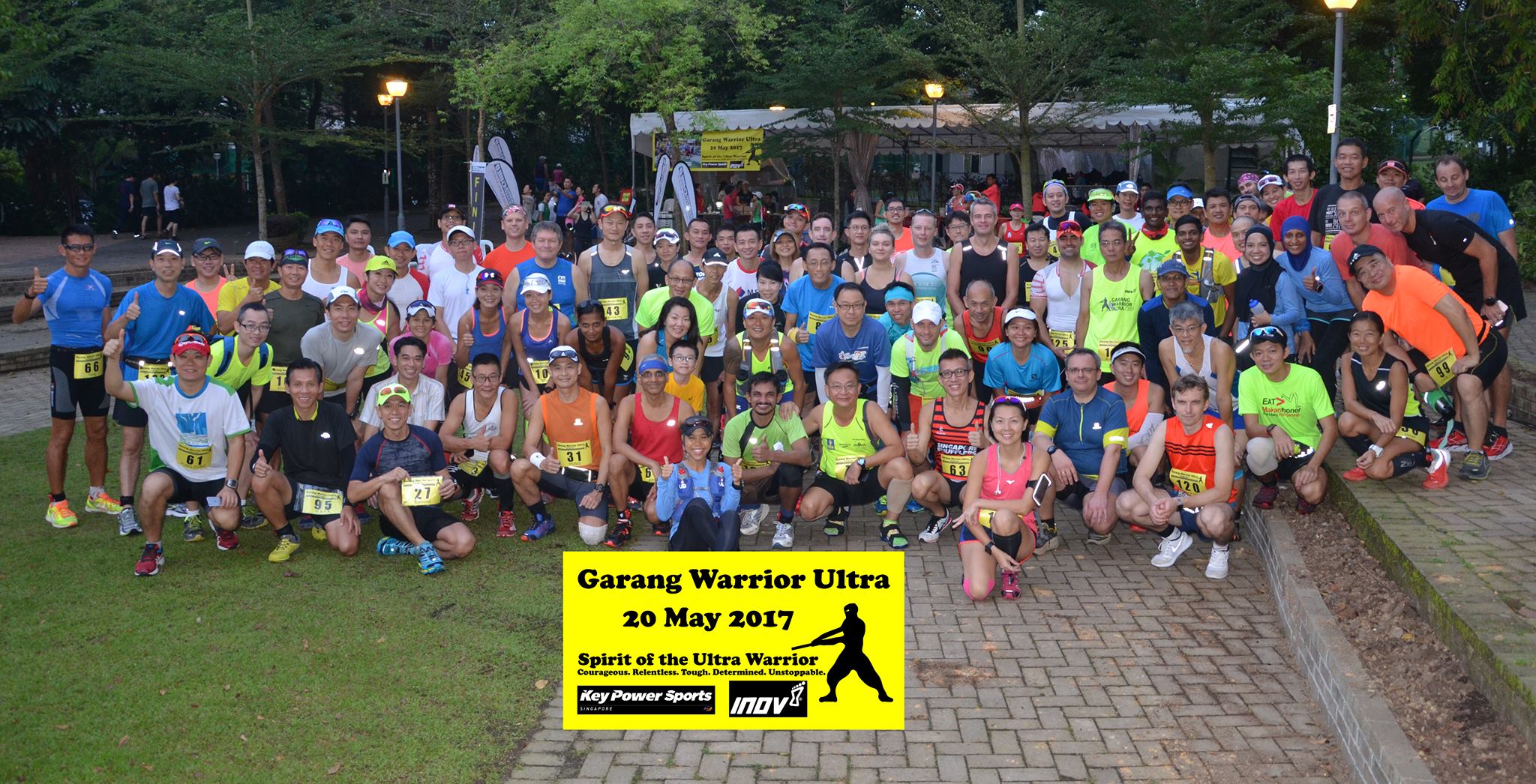 Second edition this, and a slight amendment to last year’s course due to roadworks
Distance : 4 km (2.6km trail, 1.4km road) loop (vs 5 km loop 2016)
Format : Complete as many loops as you wish on foot within 7am till 7pm*

I did well last year, unexpectedly finishing 5th, completing 16 Loops (80K)
Also, this was just under 3 weeks since Monster Ultra 200K Singapore, coupled with other issues, i never came close after 5 loops to be in the game

Flashback : Craze 2016 100 Miles, i’d DNF due to injury after 142 KM due to left ankle ligament strains, which was followed by a series of other injuries in the 2 months thereafter; right ankle ligament strain, left posterior calcaneal spur, and then what i suspect a right inferior calcaneal spur cos i started having mildly sharp pains (the kind associated with plantar fasciitis) when i awoke in the mornings (there’s been since a calcium deposit of the posterior calcaneal spur kind on the back of my right heel too though it hasn’t resulted in the kind of inflammation pains that i’ve had 3x to date with the left one)
The heel spurs do affect me during my runs. I’m constantly reminded of these injuries by the pain emanating from the heel pads

Also, i should highlight 3 words every runner should be aware of :
Dehydration
Hyponatremia
Hypohidrosis 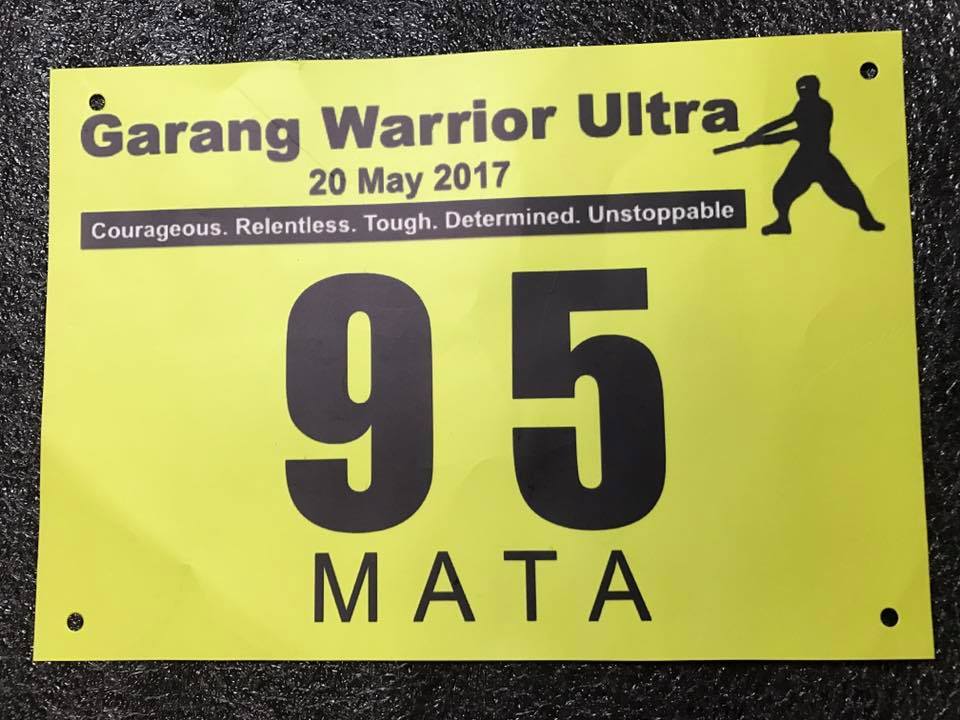 Pre-Race :
Woke up to my alarm at 5 am, and thought i’d made a mistake in the setup. Was about to go back to sleep when i suddenly realized – Garang Warrior Ultra !
Breakfast : 3” of baguette with butter, and a cup of coffee
Shared a cab with Choon Han & wife Jennifer (prearranged late last night)
Arrived onsite at 6:30 am, collected bib, final preparations, photos with friends

Loop 5 (20K) : Lap : 30:50 (Trail : 22:08; Road : 08:42); Nett : 02:12:48; 9:12 am
The high humidity was starting to take a toll on me. Losing focus and making me sleepy (although i had almost 5 hours sleep last night). This was to go on until i finally relented and decided to take a power nap in the later stages of the race
Skipped the Lornie Rd water stop since i was now carrying my water bottle in the back of my running Naked band
Probably the first time in this race my left heel starting to hurt (kinda used to it)
It would be an on/off issue throughout the day
End of #5, 2 mins rest and before i headed out again

Loop 8 (32K) : Lap : 44:54 (Trail : 32:48; Road : 12:07); Nett : 04:21:20; 11:21 am
Clouds starting to disperse. Temperature on the rise
We headed out together again. Jeremy was taking it easy, this being his first Garang having forced to miss last year’s already registered race due to work commitments (travels). He was set on doing the minimal 13 loops (52K) required for “Very Garang” classification of this event
Furthermore, this was his first long run since injuring his tendon midway thru Monster 200K but still gritting and fighting the pain (without painkillers) to finish joint 1st in that event just 3 weeks ago (i’m also against the consumption of painkillers to enable one to continue with the race)
I tried talking him into doing more, staying on until close to 7pm
Continued our run-walk routine
My right heel pad started to hurt (again, nothing new)
Longans, Coke, Watermelons at the end of the loop, followed by a quick pee break

Loop 10 (40K) : Lap : 37:16 (Trail : 27:42; Road : 09:33); Nett : 05:42:25; 12:42 pm
Weather’s really hot now !
Headed out solo, and was running in an attempt to catch up to Daniel & Jeremy. I never saw Jeremy until along Lornie Rd. He was at the far end, running
I noticed that my hands had swelled. I’ve had this before so wasn’t alarmed.
Just a sign that perhaps i’ve had too much to drink
I passed Jeremy as he was going out on his next round
My fastest loop since #6
Also noticed that i was not sweating even after racing hard back to the end
Rested for more than 10 mins before i finally headed out again

Loop 12 (48K) : Lap : 38:32 (Trail : 25:07; Road : 13:24); Nett : 07:06:05; 2:06 pm
Solo. run-walk. Stopped drinking. Starting to worry somewhat. Hyponatremia ?
At the end of this 12th loop, a cup of Longans (my last of the day), and a cup of Coke
Jian Hong had returned back to MR all changed (he was here this morning just before flag off. I’d joked then what was he doing here, cos that would mean no chance of me having my favourite desserts from Chong Pang Market). He’d brought the comfort food i’d so craved for
Helped myself to a bowl of Tao Huay (Bean Curd)
Daniel Ong was having ½ a bowl of Grass Jelly (Chin Chow). He offered me the other half which I saved for later
Pee break (in retrospect then i remembered it was dark coloured)
And headed out on my 13th loop afterwards

Loop 13 (52K) : Lap : 47:15 (Trail : 35:26; Road : 11:48); Nett : 07:53:20; 2:53 pm
Walking and sharing my trepidation about my inability to perspire since a few loops back with Joesph Wong
Midway thru Lornie, i decided to run to see if i could retrigger my perspiration
Hardly broke a sweat, which was worrying
decided to take a 20-min power nap. Unable to catch any sustained period of sleep, constantly awaken by my surroundings and myself. But all’s not wasted as I awoke feeling slightly better
Consumed the ½ bowl grass jelly
meantime, EuGene & Uncle Neo had just completed another loop

Loop 14 (56K) : Lap : 1:10:04 (Trail : 52:49; Road : 17:15); Nett : 09:03:24; 4:03 pm
EuGene & Uncle Neo asked me to join them this loop. They headed out first … I went after and eventually found them
Messed up my # of loops completed, my watch distance was off … thought i was on Loop 16
EuGene was 13 going on 14th, and Uncle Neo 10 going on 11th
Shortly after EuGene rediscovered his second wind and left the two of us; walking (midway thru I thought perhaps this was #15)
Spoke about our Monster 2017, and thanking him again for sharing his support van
Lornie – got ice to cool myself
Completed the loop, and was shocked that i got it all wrong ! i’d only completed 14 ! Thought i’m done for the day (60K)
I was seriously contemplating stopping for the day given the worrying condition I was in, that said I was starting to perspire a little now 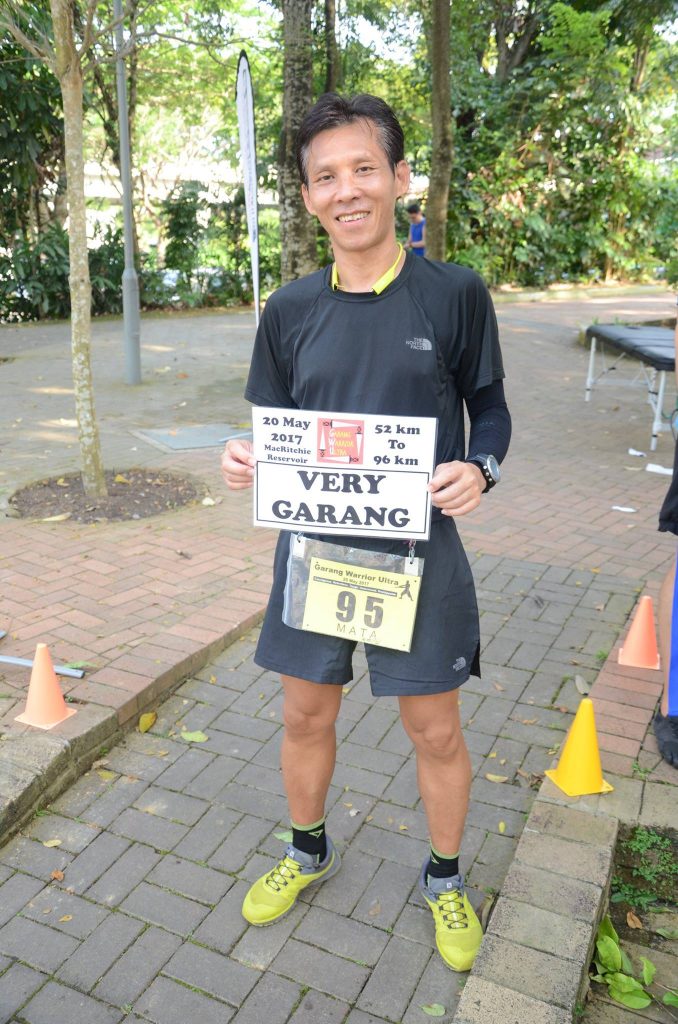 Post-Race
Rested, showered, and enjoyed the drama of the fight for podium finishing unfold between not just the Men, but the Ladies too

Prize presentations, final group shot … dinner with Steven’s Runningkakis at Hougang, before catching a cab home (swelling on hands not fully subsided by the time i went to bed)
Was back to normal by the next morning ….
Over next few days trying to determine what was the cause of my lack of perspiration when i felt that i had been overdrinking
Was a few days later when thinking back and remembering the colour of my pee that i came to realize so fearful i was of overdrinking that could lead to hyponatremia, that i’d completely overlooked the possibility of the complete opposite, that i was indeed dehydrated !
And that explains why i could not sweat despite running hard and not breaking sweat ! 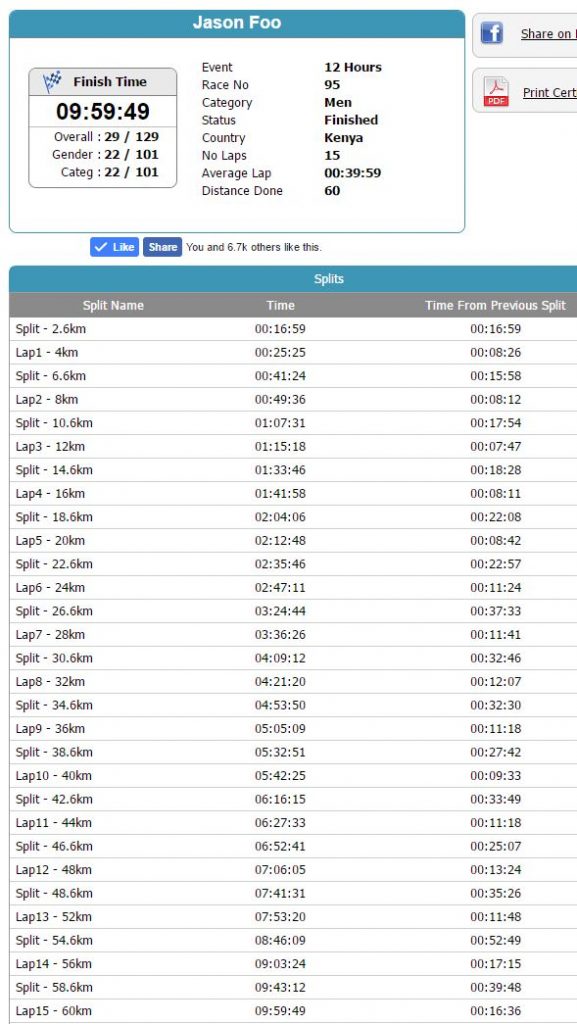 Race Summary :
Good event, seems easier on paper to hit your number of loops … until you are actually there doing it. Loops are great for mental fortitude, and camaraderie ! You won’t feel alone, or left trailing as in conventional races
On a personal note, i find this year’s 4KM loop tougher than the previous 5KM one
Though lesser slopes, plus a chunk of the Lornie Road segment avoided, it is though more mentally challenging, a number’s game as a fellow participant puts it
And not discounting the temptations of more resting stops between loops, and more drinking breaks
And still a great event. Personally i didn’t do as well as i’d hope but still grateful i could even participate in light of all the injuries i’ve had since Sep last year
Will be back for 3rd edition, May 2018 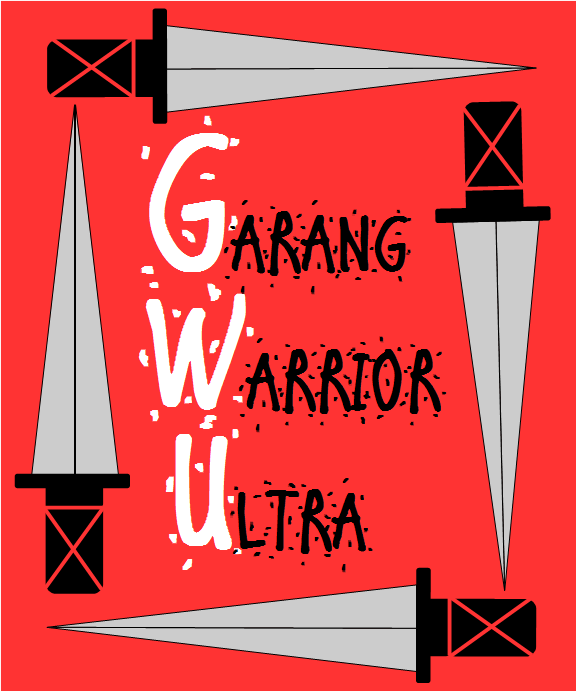