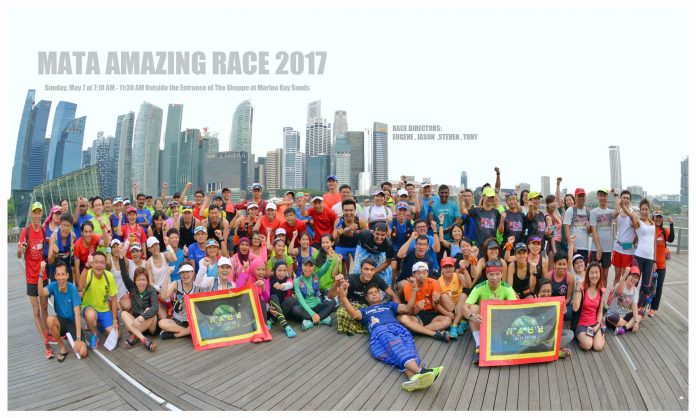 The Mata Amazing Race is a FOC, no-frills, self supported (BYO hydration), integrity based, team event with a unique twist
The race has a 4-hour cutoff time with a typical distance of 12km
The race requires teams to identify their checkpoints, and then plan their own route 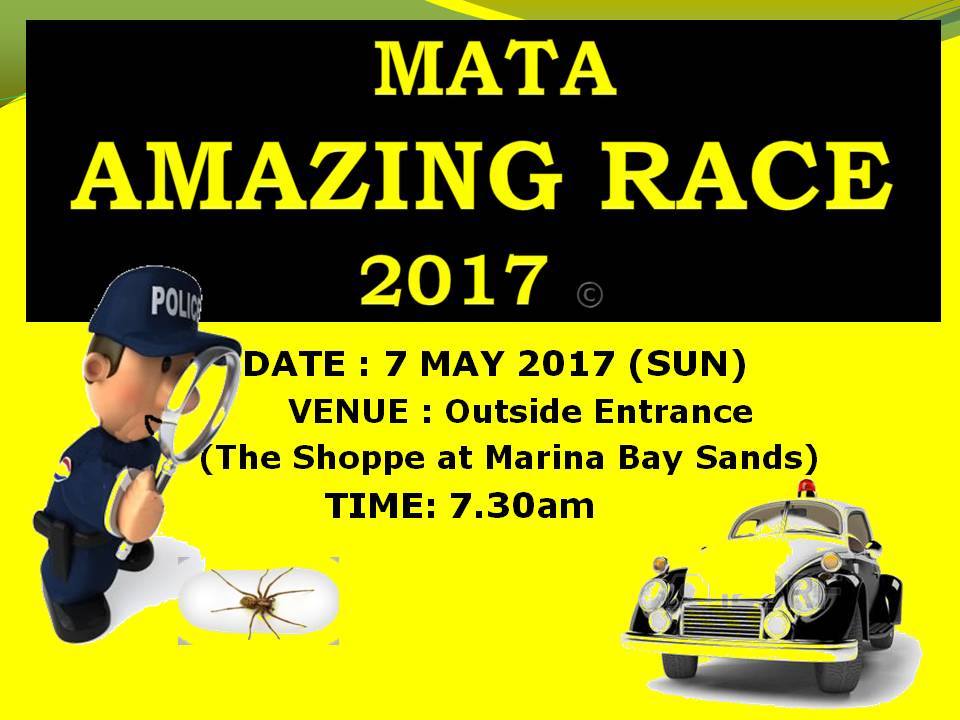 RACE DYNAMICS :
Teams are given 12 clues each
Each team is made up of 1 leader and 2 fellow members
Teams are allowed the use of smartphones (to Google), as well as taking any shortcut through buildings, and underpasses. That said, the use of any mode of transportation is strictly prohibited !
Each of the 12 clues has been deliberately cropped / zoomed in to minimize its location from being compromised by the surroundings
All 12 clues must be resolved as each is the location of the CP (checkpoint) of the race
Teams must make their way on foot to every one of these 12 locations before heading back to the Finish Line as a team
At every CP, teams must take a wefie with all 3 members in a single shot with the corresponding CP clearly visible in the background
a +1 hour Time Penalty (to be added to the finishing time) is awarded to teams who :
1) Get the CP wrong
2) Do not have all members of the team in the wefie
The maximum time penalty for any given CP is +1 hour regardless of whether the team fails one or both tasks at a particular CP 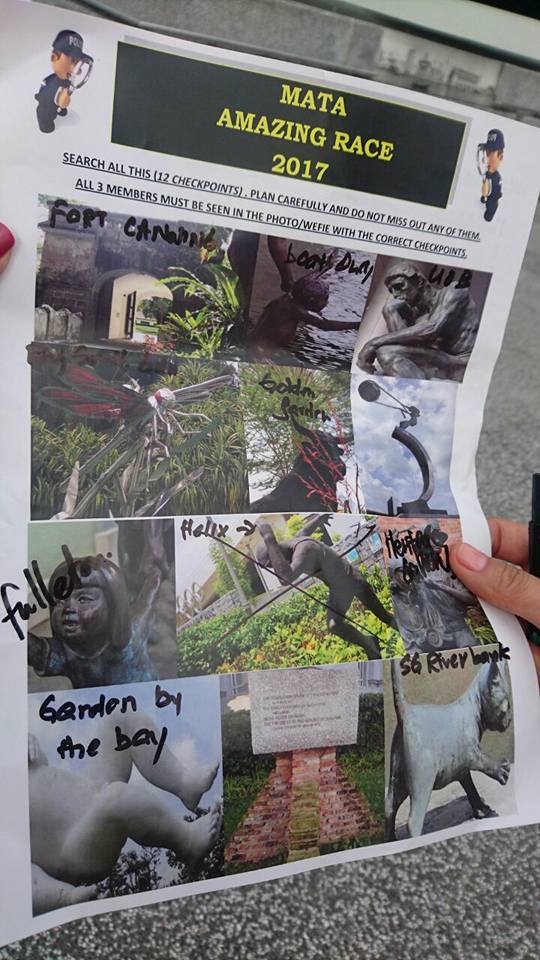 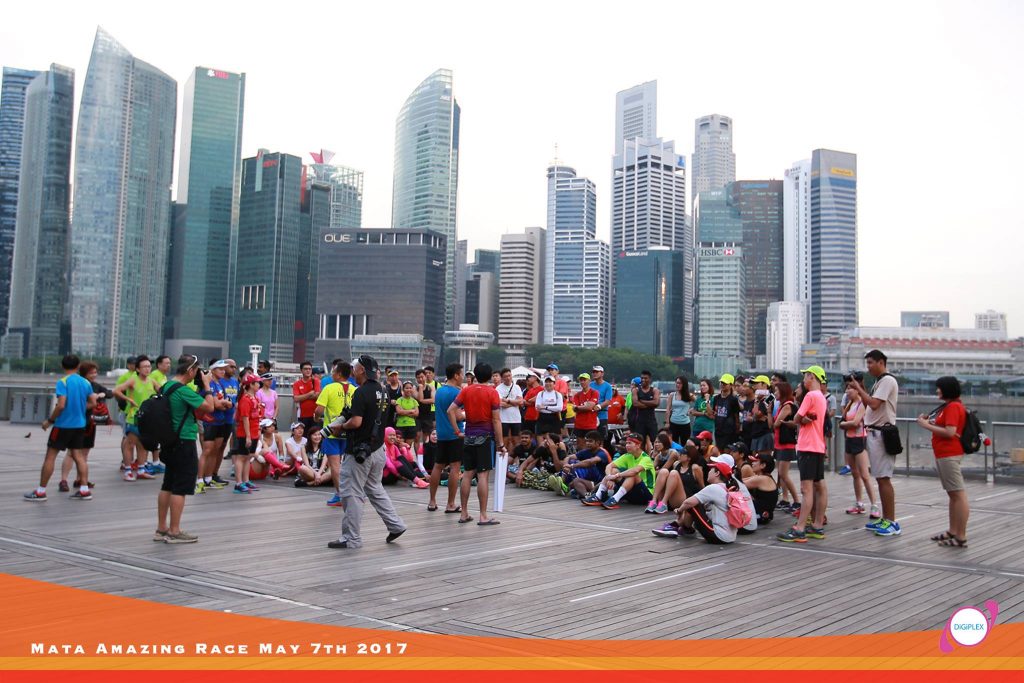 For the first Mata Amazing Race, the CPs were based on sculptures and statues located in the CBD area (Participants are kept in the dark as to the theme of the race till after flagoff on race day)
An on-site recce was carried out about 3 months ago
Many details were ironed out, and meticulously scrutinized. The time penalty system only came about during this process.
The race was based on a 3-member team to promote team spirit, and camaraderie.
A team is only as fast as it’s slowest runner !
We’ve also tweaked the clues to make it more challenging during this period, and increased the number of CPs from the intended 9 to the final 12
A ranking system was also formulated for teams that starts off with less than full strength, as well as teams that finishes with a man or two short

GOALS AND TARGETS :
Our original target was to have 20-25 teams, given that none of us had previous experience as a Race Director.
Once we had attained the minimal target number, we decided to fund the inclusion of trophies for each member of the Top 5 winning teams, as well as providing 100Plus for finishers, and prizes for the Lucky Draw to be conducted at the end of the event
We would eventually have 35 teams when registrations was closed

D-DAY :
The day started with a pre-race registration (attendance), a race briefing, group phototakings, before the race was finally flagged off at 7:37 am
Teams headed for their clues that had been laid out in alphabetical order on the floor
After a momentary lapse of shock and disbelief, teams made light work of their clues and slowly at first one, then a couple more .. streamed off from the staging area to execute their plan and their preferred routes
Most importantly, teams understood that this race was based very much more so on planning than just running fast

PODIUM & RANKINGS :
Unbelievably, just when we were expecting teams to take at least 2 hours to complete … the first team returned after 1 Hr 31 Mins ! These included time spent on online search engines, as well as planning the route.

The Champions; team B1 Runners covered 14 km, had to backtrack once or twice between CPs, but otherwise nailed all the CPs without the dreaded time penalty !
They were possibly the team that covered the longest distance of the race.
3 more teams returned within 9 minutes after team B1 Runners, with the last podium slot all but wrapped up in 1 Hr 52 Mins since the race was flagged off
Incredibly, all 32 teams that towed the line at the start not only completed all the 12 CPs given, but amazingly not a single team had incurred any time penalty at all !

RESULTS / E-CERTS :
Compilation of the teams in ranked order
E-Certificates, done up in under 3 days by RD EuGene 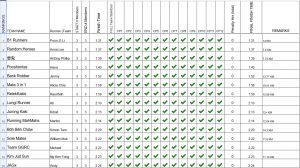 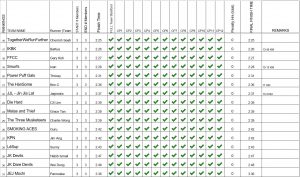 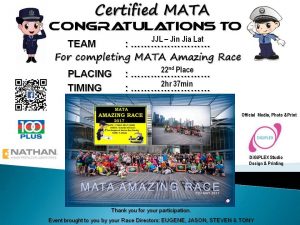 FEEDBACK FORMS :
The responses we received filled us with a sense of pride and joy.
We knew this event was going to be different, going to be fun, but at the same time felt it might be challenging to some teams, and for that we were a little apprehensive before the race was underway.
By the end of the event, we felt a sense of relief as every team got all 12 CPs correct !
We’ve had a few participants thanking us more than once for organizing this event.
The online survey reassured us of these positives, but most importantly, we needed to know if there was any area we needed looking into, needed working on.
Alas, the comments we received were simply awesome !
It made us rookie Race Directors feeling very humbled and satisfied.
A big Thank You to each and every participant !

WHY WE DO THIS RACE ?
We wanted to give something back to the running community; to bring friends together, to promote team work and camaraderie, and to provide the platform for strangers (runners) to become friends

THE FUTURE (EDITIONS) :
Buoyed by the feedback of the first edition, we (race directors) are certainly keen and looking forward to getting work on the next one started
We’ve been gathering ideas and hope to soon recce on site
As to when the race will be, we hope it’ll happen soon
Our goal remains the same. Keep it FOC, yet provide trophies for Top 5 teams … and hopefully Lucky Draw prizes, and drinks at the end of the event
Our ultimate goal is to attract sponsors for each edition, naming the edition in their honour, and raising awareness and increasing the exposure of their products or services
We seek sponsors for the trophies, lucky draws, and drinks (not monetary benefits)
So please help spread the word. Thank you
We can be reached via our FB page (link below)

Recap of the Top 5 Teams 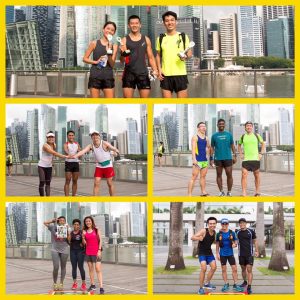 CREDITS AND THANKS :
We also like to thank our fellow RD Tony Goh of Digiplex Studios for the Printouts (clues sheet), the Mat designating the Finish (spot), and Photography
The photographers who have so generously volunteered and sacrificed their Sunday morning shooting, and thereafter the time to review, process, and upload their work.
We would like to thank the following people :
Photographers; David Tan (Mythos Photography), Dave Poh (Pictureart Gallery), Tan Kim Lai, Tony Goh (Tony Ton Ton Funshots / Digiplex Studios), Tay Guan Kiat, Wilson Ong, Shiok Runner (Running Shiok)  [in no particular order]
Bee Choo for a mammoth effort in recording the finishing times of the teams, especially during the bunch up midway thru
Lily Bimmo for your help and company
and, Nel for co-sponsoring the lucky draw prizes

And last but not least, The Runners !
… for there cannot be a race, without the runners !