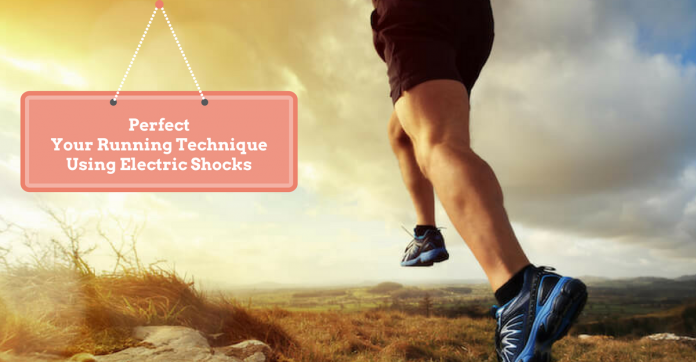 Elite runners slash trained professional runners tend to land on the front of their feet in contrast with recreational runners who have a greater tendency to land on their heels. Landing on your heels have been linked to a higher chance of injury due to the impact (however this still remains a debate). However, it is always tricky when it comes to changing your first natural instinct as to how you run. Changing your form would mean having to be conscious about going against what you are used to. Perhaps a jolt of electricity could do the trick?

“SWITCHING FROM LANDING HEEL-FIRST TO FOREFOOT-FIRST IS MORE EFFICIENT AND LESS PRONE TO INJURY,” SAYS FLORIAN DAIBER AT THE GERMAN RESEARCH CENTER FOR ARTIFICIAL INTELLIGENCE IN SAARBRÜCKEN.

Behold the mighty Footstriker – a brand new device that uses electric stimulation to move the runner’s foot to the right angle right before it hits the ground. Early tests suggest that this has a great effect on altering a runner’s style.

The FootStriker uses a pressure sensor placed in a shoe’s insole to detect which part of the foot lands first. Whenever a bad step is recorded during a run, a pad on the back of the calf jumps into action. With this little burst of electricity, the muscles are stimulated and the position of the foot is corrected on the next landing.

In contrast, a control group received coaching on landing on their forefoot. However, the improvement statistic was only a reduction in in 17 per cent from 97 per cent to 80 per cent.

It is difficult to break bad habits, so could the new Footstriker be the solution?We hope so.