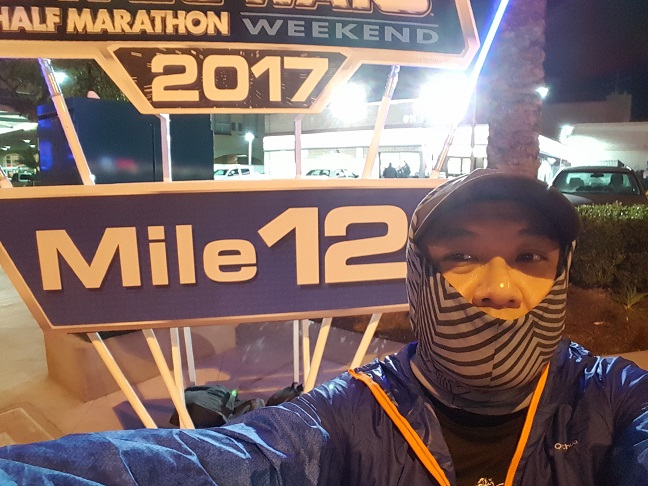 May the 4th Be With You! and its my 4th Star Wars Run of the year. How appropriate! Singapore’s Inaugural Star Wars Run was held on 6th May at Gardens by the Bay, it was preceded by 3 days of Star Wars related festivities. I was in California in January to participate in Disney’s Light Side Half Marathon, which also featured a 5k & 10k run. So I guess I might just do a comparison and review both the Star Wars Singapore Run and the Disney Half Marathon. You get 2 reviews for the price of 1 !! 🙂

In Singapore basically the race pack was collected 1 week in advance, 3 days of festivities culminating in the 5k and 10k Star Wars Run on 6th May. You could choose light or dark side so in essence 4 runs on the day. I choose the Light Side 10k.

Disney had a 3-day event too, race packs collected a day before and the 3 days had 5k, 10k, Half on each of the days. Me being a sucker for punishment and since I had travelled so far, I took part in all 3 events and included the Rebel Challenge (you run 10 & Half) as well.

I was busy on RPC day so a buddy of mine went to collect the Race pack at City Square Mall. They had a small expo there as well and I did go down on one of the days to visit the expo. Collection was pretty smooth for my buddy as I guess it was early and not much of a crowd had formed. Pretty nice pack actually, with the Yoda Doll and the Star Wars Towel besides the sponsor’s product.

Over at California it was a huge affair, big event since there were 3 races. You entered the RPC via the basement carpark where you did verification and submitted your waiver (I did not print mine so I had to make a detour to get it) which was compulsory. You collected your bib there and then made your way up to the 1st level to get your tshirts, there was not much of sponsor stuff. But they did have an expo which had everything from gels to photo frames. Plus the added section of disney run related products. That section you had to queue to get in and the queue was long .. very very long. So I pass on that. I picked up my 3 run tees and the 4th Rebel Challenge tee.

For the local run I like the concept of the Dark and Light side running together, I just wish there would have been some friendly competition like having a counter at the end and as each running completed it goes up just to see which side could have say 1000 runners finishing 🙂 All in 15,000 had signed up for the 4 runs. I brought along a camera for pics and my trusty 20+ year old torchlight lightsabre .. for fun, but it came in useful to light up those dark areas and at least 1 ther competitor knew it was Luke’s Sabre design. Did not see many people dressed up for the 10k but I think the 5k had more people in costumes running.  The starting Fireworks display was awesome I managed to get into the race pens early and took up a nice spot to video the fireworks. Interestingly they had Kylo Ren and Chewbacca flag us off at 7pm the 5k was an hour later.

In California each day there were massive amounts of runners and we were allocated corrals (pens or waves locally) based on a previously run time or in my case just randomly assigned a corral as I did not really bother to submit a time. I was there mainly for the atmosphere and experience … and to have FUN. All the runs were held in the morning and standing around in 8 degree celcius was not a really fun thing to do. This was the only run I have ever run in long track pants to keep warm. There were lots of people in costumes I guess all were there for a good time and it takes a very brave man to wear the Slave Leia outfit in near freezing weather (yes I said man, its not a typo) The race started on time at 6am and the corrals were released one after the other. Both events had I think the best starts with the Star Wars theme blaring away. But I enjoyed the local fireworks display more.

I think the Singapore run had a good idea with the 5k run, the light and dark starting at the same location but heading in different directions and then merging at the end. The 10k dark and light had the same route, rather disappointing. If it was opposing routes it would have been so much cooler !! Maybe have the light and dark intersect at the Marina Barrage Ramp or in Gardens by the Bay as there are some over head walk ways and the light could go up while the dark went under and if the run tees had XWing and TIE figher designs… I think that might have been an awesome thing to see. They had pacers but I was not sure why they were all carrying the same colour ballons which made it harder to differenttiate them but then again I don’t think many were going for PBs. Also running in the evening meant a lot more people and the route was not closed which resulted in some congestion as there was some jostling with tourist and pedestrians. A lack of cosplayers along the route and maybe I think there were opportunities for more Star Wars Theme music along the route would have made it better.

Over in California, the 5k and 10k runs were held within Disneyland itself and as such the full light show and sound was there for all even the backstage areas were lit up. Ample photo ops including BB8 (longest queue) and many other Star Wars characters. The Half was held partly in Disney and Partly along the surrounding roads. They had crowd control and a very cool way of moving people across the route if they needed, using a rope to control the path of runners. It ensured a smooth run for the runners and also the ability of pedestrians to cross. I saw a pacer or what I think was a pacer as it was just a solo runner carrying a placard with the timing on it. Cosplayers and high school bands and cheerleaders were out in force and the spectators were everywhere cheering you on. It was an experience running it. I had to stop for photo ops of cars deck out in Star Wars painting and the various cosplayers especially one of my favourite’s the Emperor’s Royal Guard. 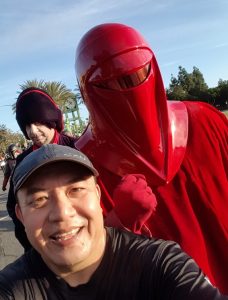 Well, the local finish was a little different as the medals and drinks were at different locations but there was food which you can buy and also free yoghurt and vitagen which was refreshing! The free movie and exhibition plus the light show (which was amazing) made it a real treat. I wish I could have run all the races and get the 4 medals. I was most disappointed with no eCert for the race. That was a real let down. Have not check out any photos yet as it is usually hard to find mine if the number is not tagged.

Finishing in California was very orderly, you pass the end, they will have volunteers place the medal over your neck, get a heat blanket, you collect water, have a photo taken, seek medical help if needed, collect your food pack, more photos (which you can bypass if you did not want photos) … before you leave the end zone. All very slick process if you ask me and orderly too. Not much at the end zone, I had to hurry back to the hotel as it was another 2k walk back. I got the 3 medals for the 3 runs plus an extra rebel challenge medal. I think the medals really beat the 4 of our local ones. 2 of their’s had moving parts … a rolling BB8 medal obviously beats any other medal outright 🙂 They had eCerts but very bare nothing flashy .. of course you could buy the full package with a frame, bib, timing and medal etc. But I guess any eCert was better than NONE !! (I am still soooo disappointed with the local event on this) Even a participating eCert would have been cool just print name and said that I had completed the inaugural Star Wars Run Singapore 2017 would have been enough. I would have printed, laminated and framed it up !! Disney had their own photographs and the bibs were tagged so I could logon and see all photos of me, I even decided to buy them all since it was a once in a lifetime event. But for some reason I could not make payment on the Disney site. So I emailed them and their technical people tried to help me with some instructions to follow. But still I could not get it to work and before I had to send a 3rd email to them they replied that they have given me complimentary access to all my photos … now that is awesome service from Disney!

All in both runs were enjoyable and I had a great time on the routes with my lightsabre. Thanks for reading this far and … May the Course Be with You !!