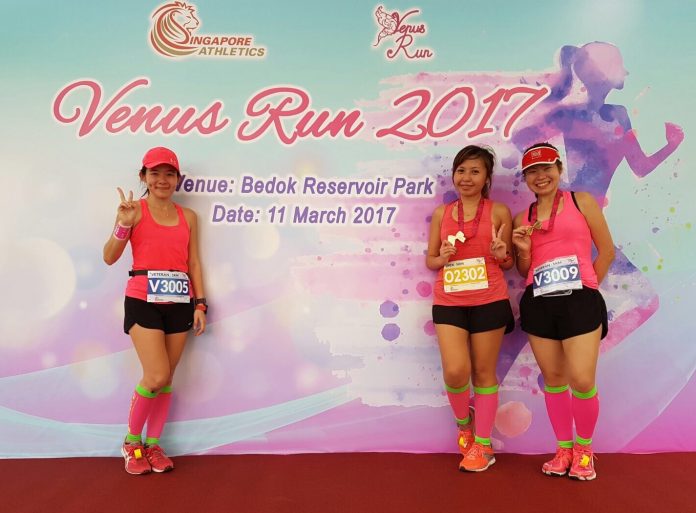 She is beautiful. She is strong. She is a runner. That’s what is printed on the race t-shirt. I think it’s really nice. Sometimes we just need to tell ourselves this and we don’t need everyone else to agree with us. We know what we are and that is good enough, just like one of the Christina Aguilera’s song: You’re beautiful in every single way 😊 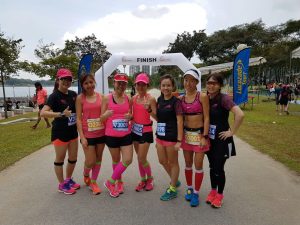 But then hor flag off is 5pm at a time still so hot and we are given a black T-shirt 😅 But I don’t like T-shirt, though I like the wordings but I don’t want to “trap heat” so my friends and I wear what we wants, though we always wear what we wants 😆 Though they tried organising a contest of “best dress costume”, but I didn’t think anyone participated as I didn’t spot any runners wearing anything unique at all. 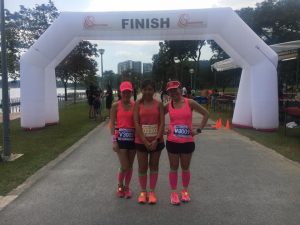 We are also given two race bibs each. Wonder is it double print, or to use the additional bib to invite our buddy buddy to run or do we really need to wear front and back but we only wore one bib to run but there’s no issue. It is a 5km run and is quite a small race I think with maybe just a few hundreds of women runners. Weather is good though usually at 5pm the sun is still quite unforgiving but we are blessed with the Sun hiding behind the clouds today 😊 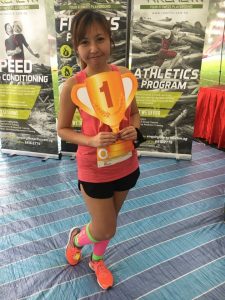 There is also a photo booth, with many nice props that my friends and I have fun at and took quite a few shots. Everything is smooth such as for the baggage deposits and collections and the finisher entitlement collections. There is a water point at about 2.7km where they give out a small bottle of New water to every runner. But it’s a 5km run, I’m still ok so I didn’t take the water. I will not say it’s JUST a 5km run because all these runs I had, I’ve learnt to respect every 0.001m because every step is really a determination to carry on 💪🏻 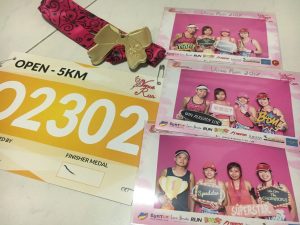 I have no aim for this run as my legs was a little aching. All my previous 5km runs are all fun runs such as Hello Kitty run, Music Run, Batman Vs Superman Run and Color run so this is considered as a more “competitive run”. Once flag off, we were running on gravel, which is not easy to run on. The route is one loop of Bedok Reservoir and I was reminded that I signed up for 50Hrs non stop run in May, running 15 loops there may going to be quite torturous actually 😅 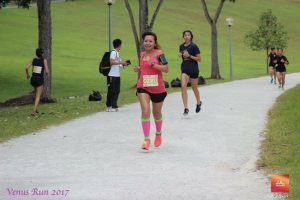 (Photo Credits: JJL runners – Nick) Everyone is running fast and I try to keep up. I was quite impressed as everyone is so fast. No one seems to be slowing down and I keep looking at my Garmin watch to see my pace and I feel ok though I really have weak determination and feel like slowing down but keep on repeating in my mind, “ending soon”, “hang on”, “keep on going” and “breathe”. Sometimes I find “talking to myself” is really a good way to keep myself occupied and motivated 😊 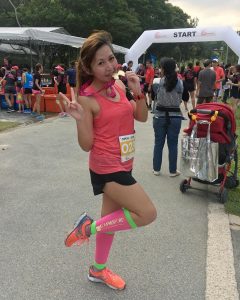 The best part of the day is when I just ended the run and was collecting my medal, one runner came to me and say” Thank you, you are my pacer and I was following you.” Wow! I was so happy! 😍 This is the first time someone said this to me! And the funny thing is that I walk off forgetting my medal and was called back by the volunteer distributing the medal 😆 LOL!

You can skip this part of you have something better to do because this is purely my “romance novel” Just like Pussycatdoll’s song “Be careful what you wish for coz you just might get it”. During Chinese New Year, I put a sky lantern writing down my wish. And I wrote “跑出火花” which direct translation means running out sparks. 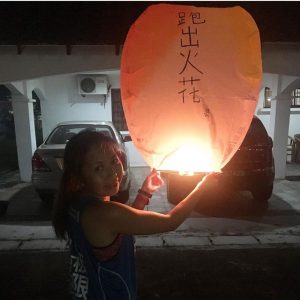 And it happened in merely a month while I’m running the zoo run 😍 Thank you JustRunLah! for the race slot, if not we could not have not met. I will definitely not sign up for a $70 10km zoo run. I was sick after coming back from HKSCM and the day before zoo run I was still thinking whether to turn up for the run as I was even on MC the day before, still I turn up for the run. At zoo run, he spotted me as I was orange from the sea of blue. 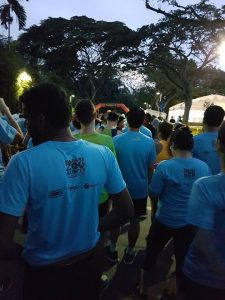 See, maybe since then he strategize and plot to get near me? 😆 We were each other’s 42race followers but I don’t know him at all because he dosen’t post pictures of himself but he recognised me. I don’t really remember much actually. At about after 2km I slowed down as I feel a little giddy. And he ran pass me and said “Jia you”, and I was like thinking who is this guy? Then according to him he said he slowed down to check whether I have catch up as he have impression of me usually not this “slow”. I was like wow, this guy is observant and sweet or this guy is creepy and stalking me but I don’t feel uncomfortable or uneasiness with him and I was the more talkative one 😆 I was sick and the guy friends I came with don’t even noticed anything wrong about me and chiong off themselves. For the rest of the distance maybe 6km or 8km he ran all the way with me, when I asked him to carry on to run as I’m going to walk but he assure me its ok and it’s a fun run. It’s a chit chat run and when I walk, he walks with me which I’m really grateful because it’s really not easy to carry on when I’m sick and it’s a 10km run. But once we reach the finishing line, I sort of “abandon” him and went looking for my friends. So the rest started with adding as friend and chat in Facebook. I asked whether he has Facebook or Instagram so I can send him the photo that Eugene from Running shots took of us, that’s my pure intention seriously but he take this gesture as “whether he got chance or not” 😆 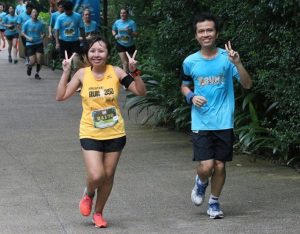 Singapore is small. But it’s really just so freaking coincidence. Ok, so maybe I’m either just pure kpo or interested as after he added me in Facebook and I can suddenly become like “Detective Conan” and go “CSI” his posts, or maybe this is not “CSI” right as usually people add new friend in Facebook will go and see the posts right? 😂 Then I saw that my colleague had liked a post on his zoo run then I remembered a few days before zoo run, while at work she asked me if I’m going for the zoo run and she says her friend is going 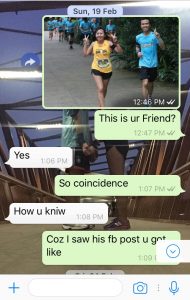 And yes, strike lottery also not as accurate, he’s coincidently the friend she is talking about! Hey I just met him, but this is crazy 😆 Nobody knows about the future, but just one step at a time, to cherish and appreciate ❤ 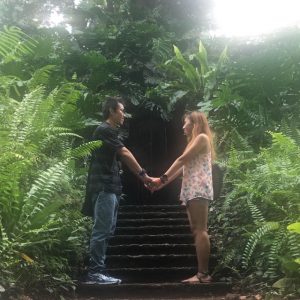