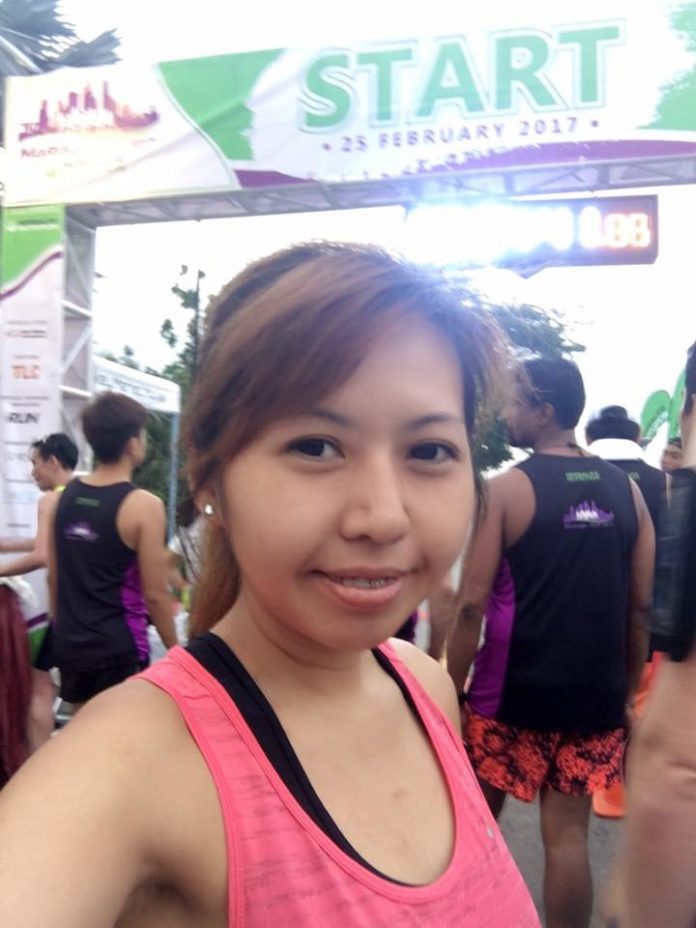 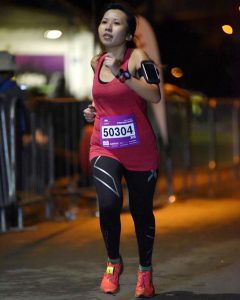 (Photo Credits: Running Shots -Epalite) Race slot is still available up for grab to even 1 day before race day, according to their Facebook page, it’s due to overwhelming response or is it really “overwhelming response”? 🤔 But I think the response is really not that good since there’s not really a lot of runners 😅

Many of my friends didn’t sign up for this race when they usually are always keen for races. According to many of my friends there is many reasons why they don’t want to sign up for this race. One of the reason is because race slot is expensive, a 21 km slot cost $70!!! Even the early bird slot is $60. This is really expensive. But the main reason my friends are not signing up is because according to them the finisher medal looks awful! 😅 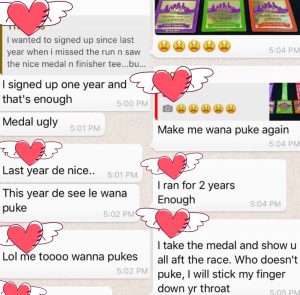 They can be very exaggerating and is just joking but see, that’s so much the power of a medal can deter many of my friends from signing up races. They can also happy happy sign up a race because the medal is chio! But I think at least there’s a medal for this race and it is my hard earned medal and I like it though the colour combination really not nice 😂 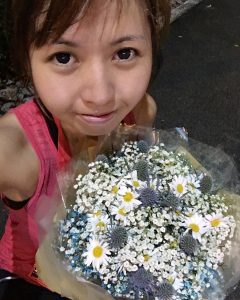 The bouquet of flower is really chio right? Receiving a flower can really brightened someone’s day! Instantly happy! 😍 Though I’ve ever imagined that one day someone special will be waiting for me at the finishing line with flowers, then twirl me 3 rounds in the air then kneel down on one knee with a ring, still so single but dare to dream right? 😂 But this pretty flowers is not from any knight in armour but is from Center Piece Floral Thank you for the flowers! It’s really beautiful! I’ve ever imagined a lot of romantic things that may happen during a run, in a run or after a run because there’s some guys who had done those romantic stunts like this which others would call them as “spoil market” 😆 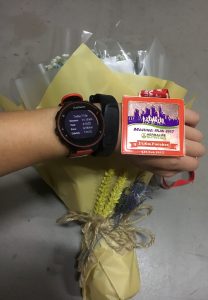 On race day, it rained. Not very good as their Facebook page informed runners the flag off for 5km is delayed for 30 minutes. 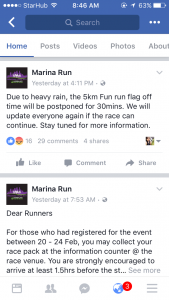 And tell us to stay tuned for more information but really kns, not really informative 😒 The 10km category flag off is delayed too so I happily thought half marathon will be delayed too and still don’t want to go start pen yet and happily wait at the finishing line to help YiHeng take finisher photos 😆 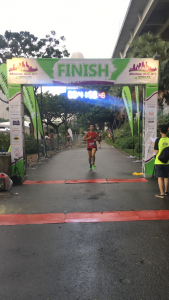 So I missed the first flag off for the 21km category and was flagged off at 7.16pm. Then it was like a “chasing game” for me, I aimed to catch up with the 2 hours 30 minutes pacers. I’ve done the Maths, if I manage to do so, it will mean that I can complete the run under 2 hours 14 minutes 😱 That’s the best timing I’ve ever gotten so far, while I was running at Hong Kong Standard Chartered Marathon 2 weeks ago, 21.1km marked at 2 hours 14 minutes, I was telling myself if that run, a total distance of 42km and I can do it, I can do it too for this run! But every run is different and unique, every route is different. So I tell myself not to think too much just run.

Seriously I didn’t spot any distance marker till I saw the first one at 8km. I think maybe I’m really “blind” 😂 Throughout the run I’m looking for Kelvin, one of my friend who put me “aeroplane” and run first and I couldn’t find him when he said he saw me at 2 places during the run 😆 After 8pm, the route of the run is really dark, floor is wet so I tell myself to run with care.

I don’t really like the isotonic water as it tastes like diluted syrup drink and it’s not cold enough, maybe if it’s colder it would taste nicer. Now I missed Pocari sweat and 100 Plus sponsored running events, their drinks is always cold and shiok. Still, Milo is best 😆

For the first 10km, I was chasing a female runner. She’s fast and her pace is constant. I was good till after 10km when I looked at my Garmin and was shocked. I hit my 10km PB! Sub 1 hour for 10km! I can pop a champagne at that moment! 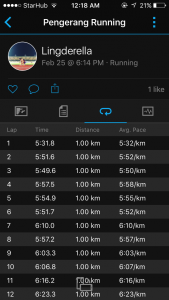 I was so excited and touched that I wanted to share the news with my running friends at that moment! Then have to tell myself stay calm, I still have more than 11km to go. But I started slowing down after that.

Still no sight of the pacers till shortly before the u-turn point at ECP I saw the 2 hrs 30 mins pacers going back. I saw hope 😍 Finally see them! But they were no where in sight after I u-turned. ECP is really torturous 🤢 Don’t like to run in there anymore, it’s long and endless, now I don’t know if I dare to participate in any recent runs there 😅 Till 15km finally I saw them but I was slowing down so much but I tell myself stay strong! Catch up with them, don’t put all the hard work to waste! Now I think I am really very self motivated 😆 Till the last 4km I felt slight pain at my abdominal area and run like chicken with both my hands pressing at the side of my waist but still determined to carry on. Sorry if I had blocked anyone 😂

Till the last 3km, the road is very narrow and conjested. There were cyclists, the path is dark and wet and there were cyclists ringing their bells to other runners ahead which I’m getting annoyed 😠 They should be understanding that there is a running event going on or the organisers should have road blocks and get permits or whatever that is needed so the runners can run in peace. At the last 2km, I really cannot tahan anymore and start to walk but I don’t want to lose sight of the paces that I walk chiong walk chiong to catch up with them. Till I saw a familiar runner and tell myself run with him and there it is the last 1 km I try to catch up with him, over take the 2hrs 30minutes pacers though both of us were in the second wave and manage to run all the way to the finish line where I can still do a last 100 metre sprint! 😆 Thank you barefoot runner! If not for the last 1km, I surely could have reach the finishing much slower and couldn’t get it under 2hr15mins! 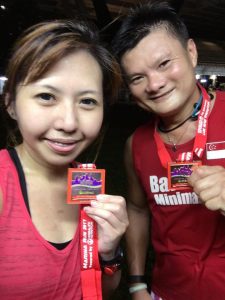 Though I had a great run but it’s really a horror at baggage deposit area and at after finishing line where the runners collect their medals and entitlements, because it’s super muddy. And the sad part is at the end of my 21km I only get 2 small cups of water and the isotonic drink, easily finished my drinks in seconds. Maybe can be more generous with us and give us bottled drinks. One bottle of water from the supermarket cost maybe $0.40, your race slot is $70 😂 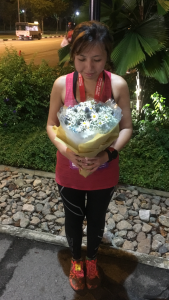 See the outcome of my shoes 😂 It is really muddy the moment I step out of the tentage after the finisher entitlement collection 😨 My shoes is all muddy. True that there are quite a few runners who come out shoes super clean but many of us are so tired after a half marathon and they want to give us “obstacles course”? 😅 Maybe be a better Organised next time such as putting floor boards, now my super muddy shoe is still waiting for me to scrub them 😭 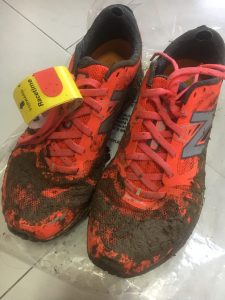